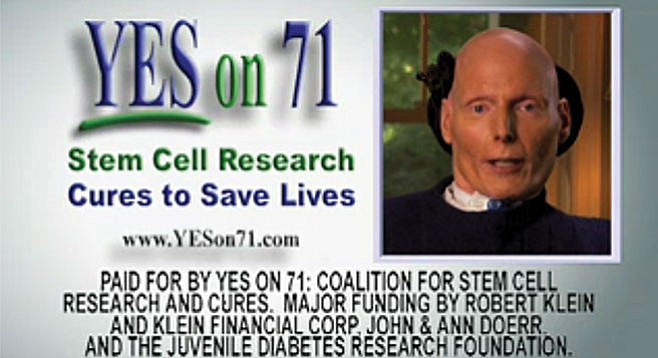 Stem cell research program out of funds in three years

California’s taxpayer-funded $3 billion stem cell research program, officially known as the California Institute for Regenerative Medicine, is spending money at the rate of $22,000 an hour, and expected to run out of cash in three years, reports Capitol Weekly.

The multi-billion-dollar bond borrowing was authorized by state voters in 2004 after elite scientists and Hollywood stars, including Parkinson’s sufferer Michael J. Fox and quadriplegic Christopher Reeve, argued in a $34 million ballot campaign that medical miracles were just around the corner. “They teased the public,” Jim Lott, an ex-vice president of the Hospital Association of Southern California and critic of the program told Capitol Weekly. “They teased us with Proposition 71. And they did not deliver on the tease, and I don’t want them to be able to get away with that again.”

Additional funding sought by the institute, critics say, should be conditioned on reforming the way cash grants are handed out, which currently go overwhelmingly to those affiliated with institutions who control seats on the stem cell group’s board. “We need to do this in a more responsible and accountable way,” according to Lott.

As the battle for new money ramps up, UCSD’s Sanford Stem Cell Clinical Center, number four among top funding recipients, is looking for a new communications director, to receive a salary “commensurate with experience.’ Says an online job notice, “This position works closely with and supports the Executive Director on communications of scientific and medical information of interest to our community and constituents.”