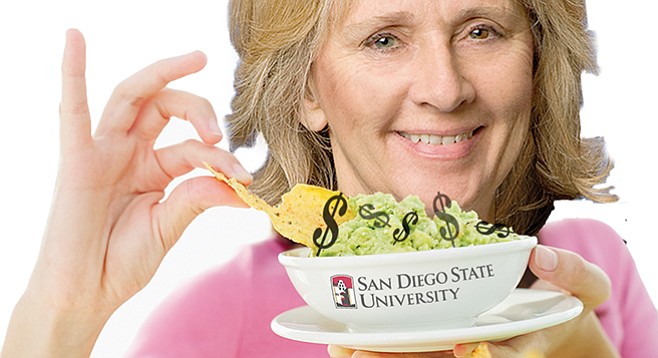 Queen of the double-dippers

After stepping down from her $301,957 a year position in June 2013, Roush began being paid a state pension that as of 2015 amounted to an annual $175,187, per the website Transparent California. But Roush didn’t remain out of state harness for long. In November 2013, university trustees voted to pay her an annual salary of $270,000 plus a $1000 monthly car allowance as the California university system’s interim vice chancellor for business and finance, serving until a permanent replacement was found for Benjamin F. Quillian. He had abruptly departed just months before, the same week an audit unearthed multiple questionable travel expenses racked up by an employee of the university system’s Risk Management Authority.

As acting administrator, Roush collected both her six-figure pension, temporary pay, and auto allowance until the June 2014 hiring of Steve Relyea. Now Roush is back double-dipping, this time as acting SDSU president following the sudden exit of Elliot Hirshman in the midst of the school’s battle against a group of wealthy La Jolla hedge-fund mavens trying to take control of publicly owned Qualcomm Stadium.

“Chancellor [Timothy] White recommends that Ms. Sally F. Roush receive an annual salary of $428,645 effective July 1, 2017, the date of her appointment as interim president of San Diego State University,” according to a May 23 agenda item adopted at the university trustees meeting. “This is the current salary of President Elliot Hirshman and complies with Trustee policy on presidential compensation, established in November 2015.”

Additionally, “In accord with existing policy, Ms. Roush will be entitled to a vehicle allowance of $1,000 per month and will receive standard benefit provisions afforded CSU Executive classification employees.” On top of that, says the document, “The president’s residence at San Diego State will be undergoing necessary maintenance this year and will not be available during the presidential transition. If it becomes necessary for Ms. Roush to lease a residence while serving as interim president, she will be eligible for an annual housing allowance of $60,000. If necessary, she would be reimbursed actual, necessary and reasonable moving and relocation expenses, in accordance with Trustee policy.”

But there is a bit of at least temporary good news for taxpayers: “At this time, Ms. Roush has waived the housing allowance.”

So, she's a temporary, interim president, yet is paid the handsome salary drawn by the guy who departed. That's determined by the "Trustee policy on presidential compensation." Who came up with that cockamamie policy anyway? Nobody expects her to do the things Hirshman was doing; she isn't there to propose new initiatives, reorganize the campus, or make earth-shattering decisions about such things as the Soccercity proposal. The expectations are that she will stay the current course, avoid disasters, keep the lights on, and get ready for the fall semester. For that, how about half of the previous president's salary? She isn't in the running for the permanent job, having already retired once. So, a fair salary might be, oh, $100K a year for the few months she'll be in charge. But who says those top administrators (or corporate execs for that matter) are paid fairly? Most are grossly overcompensated for what they really accomplish.

What a scam. Something smells rotten at SDSU.

Something always seem to smell rotten there. I used to think is was the poor sanitation on frat row, but now most of it comes from the admin building.

Great gig if you can get it. I have a hunch there's a connection between salaries like this and the rising tuition that is creating a debtor class of kids trying to get an education. Do ya think?

Yeah, I think so. Recent reports have decried the administrative bloat in both the UC and Cal State systems. Admin staffs have grown faster than the size of the student bodies and faculties, and their costs have ballooned. Moreover, the salaries of some administrators have gone stratospheric. Her salary, pre- retirement, of about $300K, sounds excessive to me, and I'd guess to most observers. Multiply her compensation across the twenty-plus CSU campuses, and you start to understand why the fees keep going up. It would not be so bad if the educational experience was improving along with the higher fees, but it isn't, and even the campuses admit that.

Complete Rip off and Boondoggle.

How about a new regulation against double dipping on State Taxpayer money?!

An interesting idea for sure. But if some of these jokers could not retire and then return to work, they would never retire, at least officially. What they could do is "retire on the job", a practice of staying in position while doing as little as possible and putting in as little time as they can get away with. And it isn't necessary to be old or older to retire on the job. I saw 30-year-olds do it a few times.

Interesting how the top Admins keep getting 5 figure raises every year and yet us bottom admins are denied raises every year. My boss' raise last year equals a third of my salary and yet I asked for small raise this year and was denied. Yes, I work at SDSU.