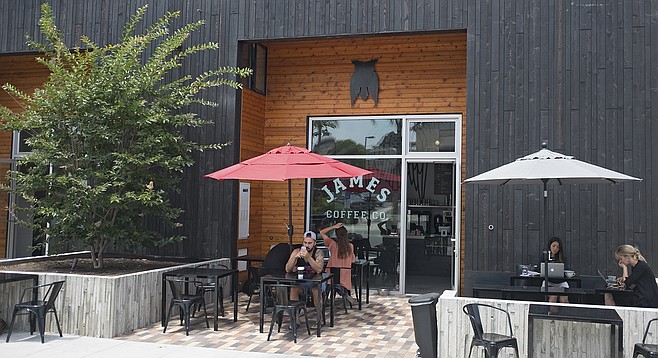 Owner David Kennedy was offered the space by the building’s architect, Lloyd Russell, who is an office neighbor of James’s café and roasting shop Little Italy. Kennedy says that since Little Italy is a popular destination for tourists and locals, that shop sees customers from all over. He views the less-trafficked Bankers Hill as a different kind of opportunity: “I thought it would be fun to be in an actual neighborhood that has that consistent sense of community.”

OB Beans started out with a cottage license, roasting out of the home of founder Mark Bell. For the past two years, it has primarily sold beans online, and at local farmers markets.

Bell and partners Ryan Bardelli, Taylor Langstaff, and Ben Nease have been building out the full-service coffee shop the better part of a year. Nease says the brick-and-mortar will continue the business’s mission to contribute proceeds to charitable organizations such as Ride for Water, which OB Beans worked with to distribute water filters to local communities during a recent coffee sourcing trip to El Salvador.

“We didn’t start off as coffee people,” Nease explains, “We cared about people and building relationships first.” But, he continues, “as we became more and more nerdy about it… we realized how many people this little coffee cherry affects.”

Barrio Logan-based Ryan Bros. Coffee brought local coffee to downtown Lemon Grove (7801 Broadway) The location at the corner Lemon Grove Avenue had previously been occupied by Starbucks, but the Seattle chain shut it down late last year to open a drive-thru location less than a mile away.

Ryan Bros. cofounder Tom Ryan observes that Starbucks has closed a number of neighborhood shops in favor of the cheaper-to-operate drive-thru model. “They leave behind the infrastructure,” he says, “So we were able to take advantage of their exceptional build out.”

As a result, Ryan Bros. remodeled the 2000-square-foot shop and opened within two months, furnishing it with coffee bars and tables made from reclaimed wood, including some unused Lemon Grove railroad ties. It also features ten tap handles pouring rotating selections of the company’s 17-and-counting proprietary flavors of nondairy cold brew drinks.

With a touch of humor, Ryan adds that the location having been an established destination for daily coffee drinkers has helped the shop to a quick start. “When you have more than a decade of pavlovian behavior,” he says, “that lasts forever.”