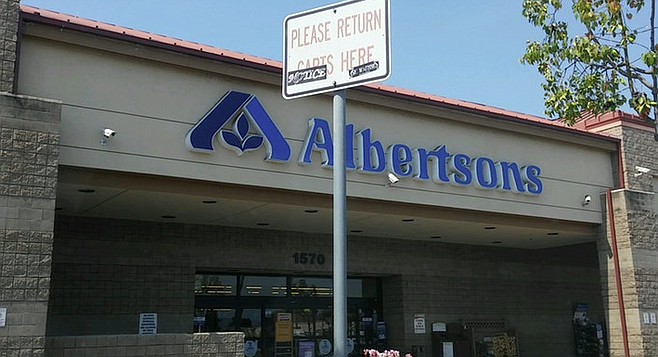 Customers Rage at Refugee Panhandlers in Front of Escondido Store

A Syrian refugee family, panhandling in front of the Albertson's store at 1570 West Valley Parkway in Escondido, set off a firestorm of complaints from customers. From July 1 through July 19, a man and woman in their mid-thirties, and a two-year old child endured extreme heat while the man held up a sign that said, "Please help us. We need money."

Some customers were benevolent and donated a dollar or two, but many were outraged and asked the store management to remove them.

"We've asked them to leave three times," the store manager said, "but they keep coming back." He asked not to be identified.

One long-time customer said he has seen the family in front of the store on and off for about a year. "We certainly don't need any more refugees here," he said, "but Trump keeps letting them in. He promised to create safe zones for them in their own countries and he should keep his word."

According to The Pew Research Center, a total of 7,594 refugees entered the U.S. during President Trump's first seven weeks in office. Of these, 3,410 were Muslims (45 percent) and 3,292 were Christians (43 percent), with other religions or the religiously unaffiliated accounting for the rest.

A total of 2,466 of the refugees came from six countries under the new travel restrictions--Iran, Libya, Somalia, Sudan, Syria, and Yemen.

One hundred thousand refugees were scheduled to arrive in America by the end of 2017, but President Trump has cut that number by half.

Why does our government settle these economic refugees in one of the most expensive regions in the U.S.?

Perhaps low cost-of-living areas are not very tolerant or welcoming. Then there is the matter of climate. Desert dwellers may not fare well in northerly climes.

The middle-eastern refugee populations in the Detroit (Dearborn area in particular), are huge. El Cajon comes in second.

So why don't other Middle Eastern countries allow in "refugees" that will be so well-suited to their cultures?

Because many of those countries do not buy into the multiculturalism concept.

Probably supplementing their refugee stipend. Why wait for a government check when you can go direct to the taxpayer.

This is the kind of immigration that we do not need. We have enough of our own home grown unemployable stupid people on welfare we don't need to import any more.

To the author Melinda and the Reader,

Given that the headline was about a Syrian family, what did you do to to verify the origin of this family?

Well, they weren't Irish, that's for sure.