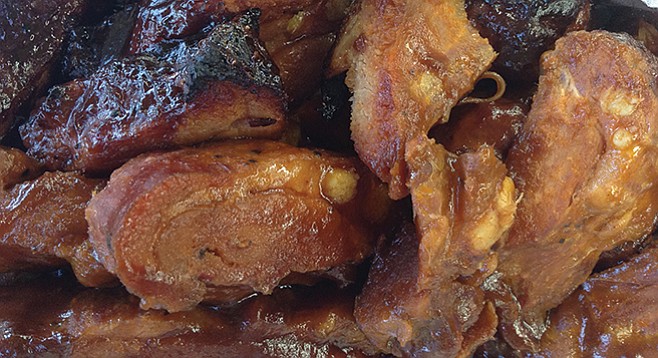 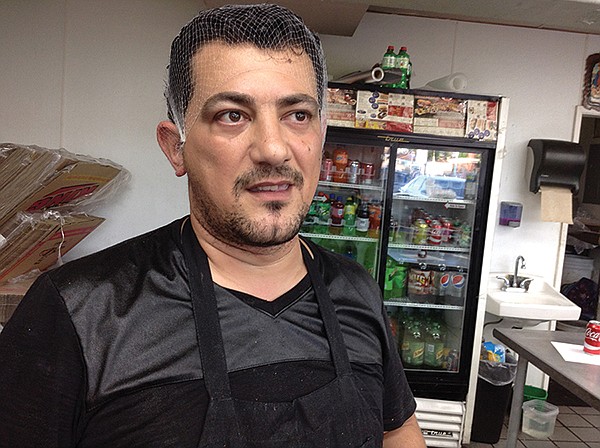 Wally’s been working here 16 years, and the place has been going at least 20.

And that’s for a 14-inch pepperoni pie. A big permanent sign outside advertises it. 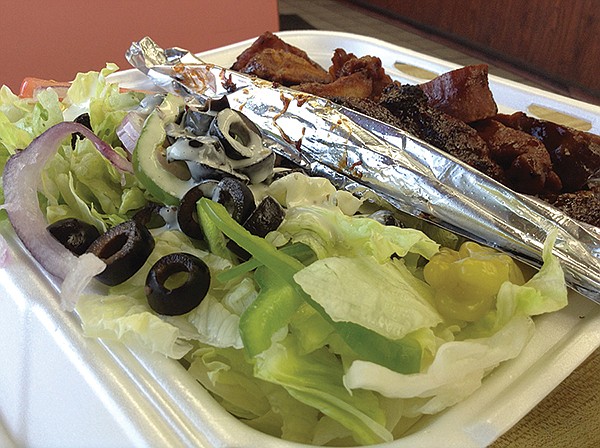 The salad, with its pot of ranch, red onion, green bell pepper slices, yellow pepperoncini, and tons of sliced olives.

“He is our best customer,” says Wally, the guy taking my order. “He’s in three, four times a week.”

I kind of expected deals like this here. This eatery is no way lit up like a Mickey D’s. It’s in a totally nondescript, actually kinda scuzzy strip mall at Cherokee and El Cajon Boulevard, around 36th Street. You only see the $5.99 pizza offer if you’re heading downtown. 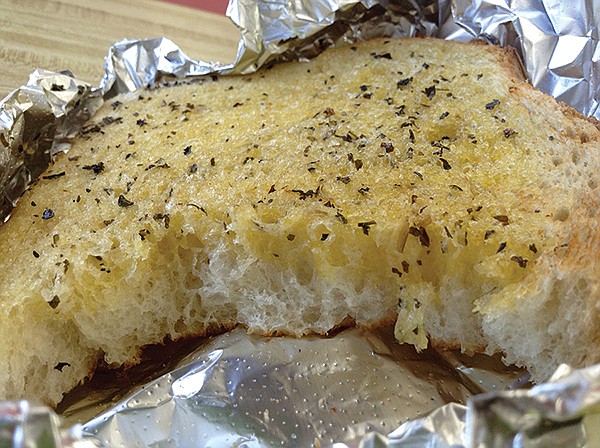 Big, thick, hot chunk with a quarter-inch of soaked butter and garlic, plus basil sprinkled on top.

Dang it. I was coming the other way. Stopped in across the road to check out a new-looking Ethiopian convenience store, Addis Market. See if they have my favorite injera, the Ethiopian fermented bread, but the dark version made with teff, the ancient grain from Ethiopia and Eritrea. Has its own taste. Carla’s a fan, too. I wanted to take a couple back to the ranch, but the guys there said they’d just sold the last injera for the day. 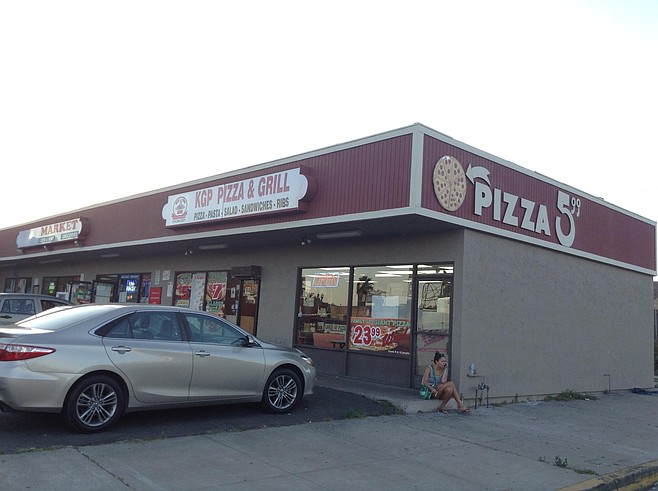 The good news: in a week or so they should have hot take-out food, including injera, and later, a sit-down eatery right here (at 3643 El Cajon Boulevard).

So I came out of there and then spotted the KGP Pizza & Grill. “Pizza, pasta, salad, sandwiches, ribs,” it said. Hmm... It’s the ribs that speak to me. And I know they’d positively sing to Carla. Even though, for sure, they ain’t gonna be $5.99.

Whatever. Whip across the boulevard and we’re into basically a take-out place. Counter, three tables, and pizza/wing deals slathered over the counter front. From the constant phone-call ordering that’s happening, you can see this is set up as delivery central, not a Mr. A’s.

You can also tell straight up: this is a Chaldean — Iraqi Christian — joint. The music has that Middle Eastern beat, but they have a crucifix on the wall. And is that Arabic the guys are speaking? Or Aramaic, the Chaldean language Jesus actually spoke, as many Chaldeans will tell you proudly?

Wally, the manager, who’s taking orders, says no, they don’t have any actual Chaldean food here. Nearest thing could be gyros with fries and salad going for $7.99. Or something vegetarian. But this place is basically about pizzas. The standard 14-inch with “the works,” 11 items, goes for $16.99. Top price is for the 28-inch with the works, for $36.99. But they also cook everything from wings ($9.99 with fries and salad) to fish and chips (good price, too: three pieces of fish with fries and salad for $7.99); burgers (half-pounder and same combo, $8.99); spaghetti with four meatballs, garlic squares, and salad ($8.99); shrimp (half a pound, about 21 of them), plus fries, salad, and cocktail sauce for $7.99. Plus subs and appetizers like six stuffed jalapeños for $6.99.

But my mission here is simple: ribs.

“Well, we have a special dinner,” says Wally. “Ribs with salad and our own home-baked garlic bread for $9.99.”

“Trust me. You won’t be disappointed.”

So I do and I’m not. It’s not quick, but that’s okay. It means they’re cooking stuff. Not just microwaving. I see Wally take handfuls of ribs out of the freezer, and Wally’s workmate, Danny, who’s been flying pastry around his hands for someone’s pizza, starts chopping. My lettuce, perchance?

I put it down on the one window table. First thing I unwrap is a foil envelope of toasted bread. Big, thick, hot chunk with a quarter-inch of soaked butter and garlic, plus basil sprinkled on top. Then the salad, with its pot of ranch (“We make it here!” says Danny), red onion, green bell pepper slices, yellow pepperoncini, and tons of sliced olives. It’s pretty generous. And then, the ribs. Boneless. And there’s a lot of them. I lunge in. Ooh, yes. The deep salty-sweet taste of the BBQ sauce. Honey sauce, Wally says.

Huh? Then we agree, size-wise they have to be beef. But beef or pork, tender is the bite. Tasty is the swallow. I start eating like there’s no tomorrow.

This is a bargain. There’s just so danged much. Including a can of Brisk lemon iced tea and tax, the bill comes to $11.84. The biggest pleasure is chowing a rib or two, then mixing in a bit of this toasted garlic sourdough bread. And then scooping up the ribs’ drippings with it. Magic.

“We bake that bread here, too,” Wally says again.

He’s been working here 16 years, and the place has been going at least 20. Danny’s been pizza-twirling around eight years.

I pack the pile of remaining ribs, and the toast and salad, to go. Just can’t fit no mo’ in ye olde belly. Plus, this will earn me big brownie points with Carla. And actually, a few hours later, we devour it all. That’s, like, three meals for 12 bucks.

I tell you, get beyond the Pleasure Zone of our fair city, prices go down, values go up. This place will never win the Best Decorated Food Joint award, but it’s what’s inside that counts, right? Just like with people.

Bottom line? Every time I pass by here from now on, it’s going to be a tussle: Ethiopian teff, injera? Or Chaldean-style ribs in honey BBQ sauce?

Man, Ed, you had me salivating like Pavlov's dogs!