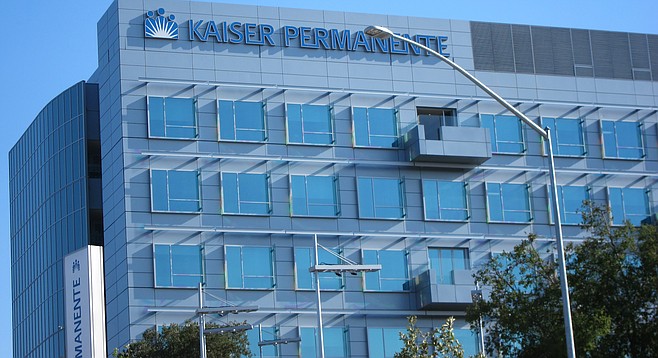 Kaiser Permanente's Tana Lorah checked in with the Tierrasanta community in June to get their feedback on the new Kaiser hospital that opened up in April at the bustling corner of Clairemont Mesa Blvd and Ruffin Road. 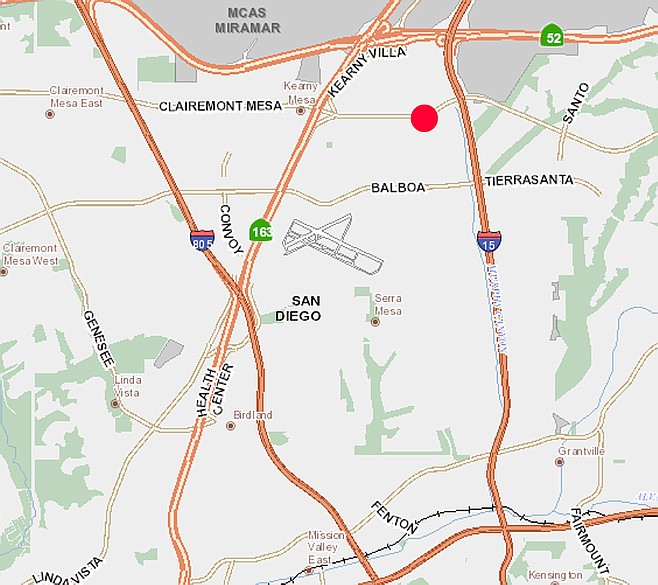 Kaiser employees have been directed to stay away from Clairemont Mesa and instead use Balboa Avenue or Ruffin Road.

The Kaiser organization, cofounded in 1945 by industrialist Henry Kaiser, had its seeds planted during the Great Depression while providing healthcare to large numbers of Kaiser's industrial workers.

Lorah started the ball rolling by giving a brief overview of Kaiser's second and newest San Diego hospital. The first, opened in 1975 (4647 Zion Ave), is located east of Tierrasanta in neighboring Grantville. According to Lorah, the new hospital is one of the most technologically advanced hospitals in the world and very green — being the first LEED Platinum hospital in California. LEED is a rating system that evaluates the sustainability of a building's design. Buildings can be rated silver, gold or platinum — the latter being the highest score. 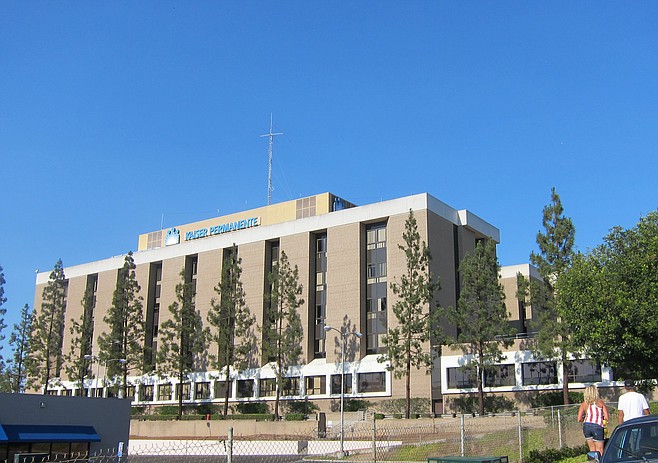 The first San Diego Kaiser hospital opened in 1975 on Zion Avenue. It may not meet state earthquake standards by 2030

The idea for the new hospital was to distribute services and patients between the two locations. On April 25, Kaiser made it official and moved about 100 patients from the Zion location to the new Clairemont Mesa location. They then immediately converted all of Zion's 266 rooms into ones with single beds. The Clairemont Mesa hospital has 321 beds, all single rooms. They split up several services, for example, all pediatric and maternity moved to the Clairemont Mesa location while all orthopedic surgery stayed at the Zion location.

The question most often asked of Lorah by the community was about traffic flow. While everyone was on the same page as to how rough the traffic is in the area, there was no clear consensus as to Kaiser's culpability. Sandwiched between Clairemont and Tierrasanta, Kearny Mesa is bordered by busy highways (805, 15, and 52) and run through the center by another (163). Added into the mix is a barrage of industrial and commercial operations that make it less than ideal for getting around.

Tierrasanta, while more idyllic with its open space and canyons, still has to deal with the traffic because they live right next door to Kearny Mesa.

When Lorah was first asked about traffic issues, she replied that she hadn't heard any negative feedback yet.

"You just haven't heard anything because this is the first meeting you've come to," said planning group member, Scott Hasson. He got straight to the point when he asked Lorah, "Do you drive on Clairemont Mesa Boulevard between 4:00 and 6:00?"

Lorah had an answer ready. She explained that her first job after moving to San Diego in 2006 was nearby where the new hospital resides. "I know exactly what you're talking about, and then we built a hospital there — so I do understand that traffic is very heavy."

Lorah wasn't alone in saying the area was impacted by traffic long before Kaiser arrived on the scene. Hasson argued that while that may be true, it is now more seriously impacted. He asked that synchronizing of the traffic lights be a top priority.

Lorah said Kaiser has directed their employees away from Clairemont Mesa and instead instructed them to use Balboa Avenue to come through the back way via Viewridge Avenue. Or alternatively, to take Ruffin Road to Ruffin Court.

Hasson responded that people bypassing Clairemont Mesa to take Balboa is an issue as well because there are few other ways to get out of Kearny Mesa and back into Tierrasanta.

The group's chair, Deanna Spehn, pointedly said to Lorah, "The biggest issue right now actually is Balboa and Ruffin and the traffic impact there which is bumper-to-bumper, and you know it. And your employees know it."

Other concerns were the presence of pedestrians, the possibility of a shuttle, staffing shifts, and when the promised Farmer's Market might be coming. About the last, Lorah said it isn't as easy as one would think from a permitting perspective, but that they are actively looking into it.

Dawn, the group's secretary, asked if the hospital was fully staffed. Yes, per Lorah. She said that there are 1000 jobs tied to the new hospital but that not all are onsite.

Dawn asked Lorah if Phase II of the project had been completed or was it still on the table. Lorah said while they don't have immediate plans to add more rooms to the hospital, they do have the capacity to add 120 more beds via Phase II.

"We would only pull the trigger if a couple of things happen," said Lorah. "One, [if] the seismic restriction rules make Zion no longer a viable healthcare setting, we'd have to close that down and pull the trigger on opening those second beds. We know that's happening. We're already in play with opening up another hospital somewhere in San Diego County so this won't be the brunt of our system. The other thing that could happen is that we have some explosion and more people have healthcare and more people choose Kaiser and we don't have enough capacity."

Regarding the seismic issue, it's been reported that the Zion facility may not meet state earthquake standards by 2030. At that point, it would need to be majorly retrofitted or torn down and rebuilt.

One board member commented that Kaiser makes money by filling up those hospital beds. Lorah said he had it completely upside down and that not only is Kaiser a nonprofit hospital, they are their own insurance company. "It's not about making money, in fact we make less money the more you stay in the room."

Lorah confirmed that there would be no mass exodus of employees during the 4:00 p.m. rush hour. She said shifts are staggered around the clock.

"So is most of your traffic coming from your patients then?" asked group member Jennifer Schultz. Lorah said that most patients are being driven, so it's most likely visitors.

"I've got to wonder if it's really Kaiser that's causing the current impact in the area or if it's just because the economy is going [up]," said Schultz.

Lorah said, "I don't know that it is or it isn't, but I'm also on the Kearny Mesa Planning Group and there are a lot of industrial businesses in there and there are businesses there that are expanding, there's housing that's there that wasn't there when we first started this project, and its continuing to grow. I just think you're in an area of growth as far as the Kearny Mesa sector is concerned."

Hasson asked Lorah to commit to attempting to address the traffic flow issue "because it's a huge issue and it's only going to get bigger." Lorah would only commit to opening the dialog.

John: I think most at the meeting admitted that it was a problem before the hospital came, but some thought that the hospital either didn't help or had made things more impacted. Both the Zion location and the new location are crammed with businesses. I used to work over that way years ago and it wasn't quite as bad as it is now, but there's always been traffic.

What I found curious was that Kaiser staff was instructed to leave Clairemont Mesa Boulevard alone and instead use Balboa. I can understand asking some of them to do that, split it up - but to pile all that traffic onto a very busy street like Balboa - a major artery that gets used coming all the way from PB and going all the way to Tierrasanta seemed a bit odd.

The busy roadways combined with the ramp meter lights on the busy freeways make for a very frustrating commute.

Adding to the frustration, drivers making turns on red lights where drivers who actually have the green lights are not entering the intersection because they have nowhere to go to get out of the intersection as traffic is backed up. When those with actual green lights finally get the space to go through, side traffic drivers make that turn to squeeze in, causing traffic to get stuck.

I'd like to see no turns on red lights during rush hours in that area, along with a traffic cop or 3 to enforce it for a time, to see if anything eases.

They should consider that. I see that in different busy areas. Several people probably have to die first though.

Widespread homicide should not be the motivation to get such practice in place.

Oops, you probably meant from all the accidents from such high speed traffic collisions that could take place in these jammed up intersections. (Ha ha.) My bad.

With progress comes people and with people comes congestion. One can progress or regress but never remain static. Traffic and congestion will never improve just get over it.

Alex--you don't realize how ignorant you sound, do you? If everyone worked together, elected progressive officials, got rid of greedy corporate power and special interests that just want to make money for the 1%, etc--then we could change this terrible situation and have true progress--not the bogus, deadly petro-chemical "progress" that you believe is inevitable. What you call progress is an unethical death-culture, my friend--don't let it become your god. While you go on clinging to your ignorant, passive idea of inevitable "progress," climate change will bring a tremendous socio-economic crisis to overwhelm you and bring your sacred death-culture to an end.

The really sad thing about this article is that no one mentions the real culprit here: the total lack of support or planning for public transportation. Our continued reliance on climate-changing automobiles for commuting to work in San Diego is unsustainable. But sadly, we see very ineffectual leadership from the city and county, and the continuing corruption of SANDAG: especially lacking in vision and leadership is our do-nothing Republican mayor with no vision, Kevin "Run for Governor" Faulconer!

There is no way that adding that new hospital could have avoided more traffic. I worked on Kearney Mesa over 40 years ago, and that trip between I-15 and I-805 on Clairemont Mesa Blvd was a bear then. I cannot imagine how bad it is now. Having the hospital shifts start and stop on non-commute times helps, especially for the hospital employees. But that doesn't make it go away; it just moves it around.

But the story I'd been fed by the Big K was that the Grantville facility had to be replaced, and right away, due to the seismic requirements. Now the story seems to be that it can be used until 2030, and then maybe even after that. So, why did Kaiser build this one? I'd have to assume it was to handle more subscribers.

Another facet of this opening is that it should be relieving some of the traffic load in Grantville and Allied Gardens. I've been seeing reports here in the Reader for years about the parking shortage at the Zion hospital, and how the employees were parking out in the neighborhoods, crowding the streets and making a parking nightmare for the residents. Shouldn't that go away now, or at least improve?

The traffic should have been considered during the permit process, so blame the city. If you want a story about unexpected traffic, check out the In n Out burger chain. I would hate to operate a small business near one