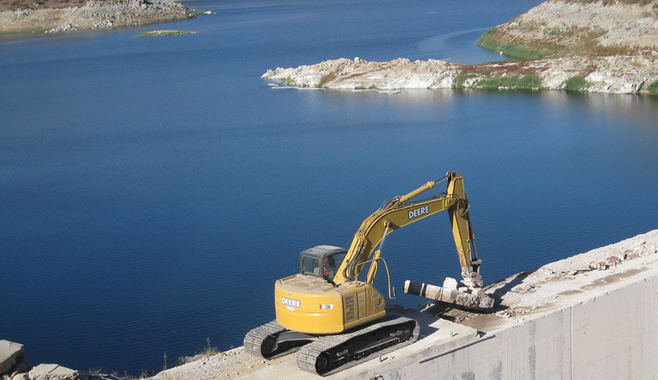 As the world gradually shifts its energy focus to renewable sources such as solar and wind, utilities are faced with a demand for secondary sources — those that are available when the sun isn't shining or the wind doesn't blow.

One option is so-called "peaker plants," traditional power plants fired by natural gas that operate only during periods of peak demand. Like other gas plants, efforts to install them have drawn heavy criticism from nearby residents and the environmentally minded in general. Another strategy being pursued by San Diego Gas & Electric is the installation of energy storage facilities, essentially massive battery banks that load up during the day when renewables are pumping more power into the grid than is needed and depleting during peak demand times in the evening.

The San Diego County Water Authority is floating a similar idea, using water from the San Vicente Reservoir near Lakeside as an alternative means of storage to lithium ion cells. Partnering with the City of San Diego (which owns the reservoir), the water authority has received a preliminary permit for the project, which will allow the partnership to solicit parties that would be interested in the power were it to be built.

A dam-raising project completed in 2014 created the potential for the water authority's so-called San Vicente Energy Storage Facility. It would consist of a second reservoir in the hills above San Vicente and an underground pump house with four 125-megawatt reversible pump-turbines. During times of excess power supply, the devices would pump water from San Vicente into the secondary reservoir, where the water would essentially serve the same function as a battery. When the grid needed to tap into power, water would be released, generating up to 500 megawatts of power as it passes through the turbines — roughly enough to power 325,000 homes for eight hours.

Per the authority, the project would have no adverse effect on water quality, fisheries, or other recreational uses of the lake. After soliciting for interest from utilities, developers, and others interested in partnering on the project, the group expects to report back sometime in April, though actual construction could be as much as a decade from completion.

Considering that most of the water in the reservoir is sent from the Colorado river and pumped with electric motors, it might be more cost effective, efficient, and less polluting to continue to buy power rather than use water as an energy storage battery and build the infrastructure to do so

This concept is a very old one, and isn't particularly efficient. It just hasn't been done locally before. If the energy stored is from renewable sources and would otherwise be wasted or consumed for low value purposes, then storing it during one time of day and using it another time of day for uses that would otherwise require a peaker plant, it would make sense.

Actually, it doesn't sound like a bad idea at all. But technology is advancing, with battery storage technology making great strides. There is also talk of using giant capacitors as storage devices for electrical energy, although not much has been heard about that recently. So, using this 19th century means of storing energy may not be the best idea.

Based on Don Wood's comment, I stand corrected. This sort of storage is in use now, if his comment is accurate. All I recall about that Olivenhain reservoir was that it didn't want any of the Lake Hodges water in it, due to contamination. Seems Lake Hodges was full of decaying vegetation at the time, and the water would make a mess of the expensive imported water stored in Olivenhain Dam. Something must have changed while I wasn't looking.