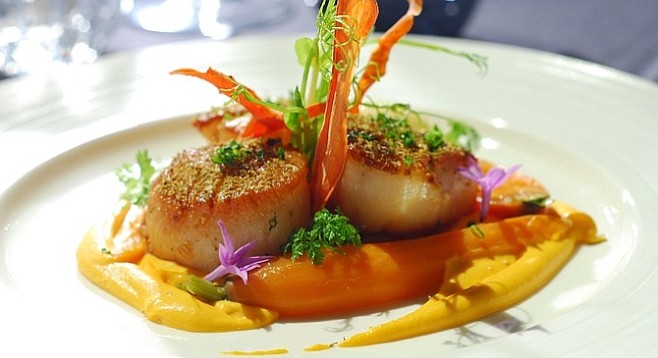 Trust her, she’s been to Paris

My husband and I experienced an extravagant dinner more than a decade ago in a tiny village in the French countryside. We are still talking about how delicious and entertaining the food was, and we never thought we would enjoy that type of dining again. That is until we had a date night on a cold December night and chose a fancy new restaurant in downtown Rancho Santa Fe called Ponsaty’s. 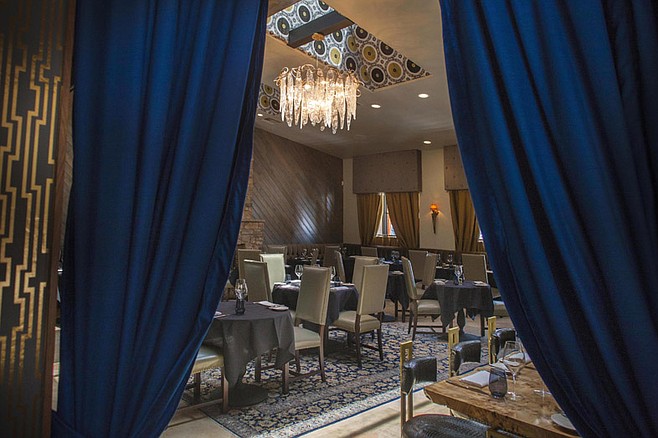 The dining room, decorated as a French restaurant should be (including chandeliers).

We were greeted outside at the sidewalk dining area by our server, Robert, and shown to a little table for two in the corner. The room was larger and darker than the one in Provence and was decorated as I had hoped — chandeliers, comfortable booths, tables, and luxurious French wallpaper. The ladies’ room was even chic. In spite of all that, the dining room isn’t haughty. Trust me, I’ve been to Paris. 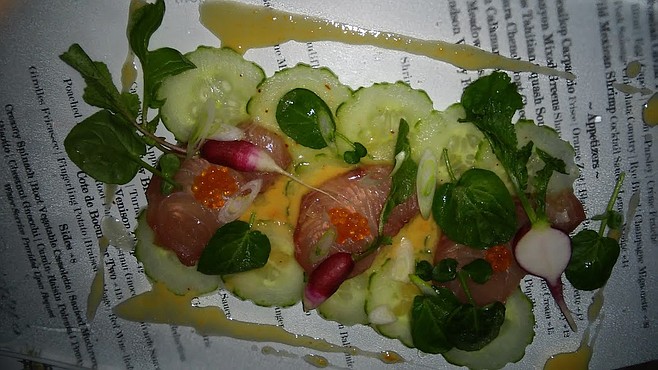 Yellow Tail Carpaccio, thin slices of yellowtail with cucumber, watercress, and uni-yuzu sauce. Each bite was smooth, with just a tiny kick from the sauce.

As for the food, Robert handed us quite a few menus with pages of wine and craft cocktails, appetizers, and main dishes such as Foie Gras Guinea Hen. Our eyes must have glazed over, so Robert subtly recommended the tasting menu. We were more than happy to put ourselves in his hands — and in the hands of Chef Patrick Ponsaty, a fifth-generation French chef and one of only two French Master Chefs in San Diego.

Creamy Chilled Parsley and Arugula Soup with Caviar started us off. I’m not a big caviar eater, but I have to say it was good. Next came local Yellow Tail Carpaccio, thin slices of yellowtail mixed with cucumber, watercress, and uni-yuzu sauce. Each bite was smooth, with just a tiny kick from the sauce.

When the porcini stuffed mushrooms with foie gras arrived — with tiny slivers of edible gold — I wasn’t sure about eating foie gras. I took a bite, but I couldn’t shake the image of the goose who gave up his liver. My husband loved it. “It tastes like prime rib,” he said, sighing as he cut in to it with his fork. He gladly took my portion.

The seared Maine scallops on lobster risotto were the biggest hit for me. The scallops were smooth and had a hint of a nutty flavor. The lobster risotto was buttery and filled with lots of little pieces of lobster, making this an over-the-top meal.

We stayed for three hours, and as we finished the last of the spirits we promised each other to start saving to come back for our anniversary in February.

Hiding in the suburbs.Born in San Diego.