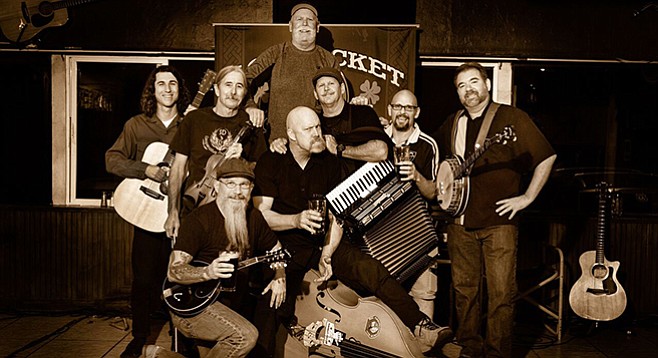 “We’re all from Clairemont,” says guitarist George Davis, who picked up the mandolin late in life.

“We used to play huge parties in Clairemont, right across the street from Clairemont High,” says Davis of his rock-band years. He says the core of Ass Pocket were all in different rock bands, such as the Claire Monsters, Enuf, and the Fairfield Fats Band.

“I graduated in ’76. Crowe showed up a year later,” he says of the filmmaker who embedded himself in Clairemont High to gather material for Fast Times’ “Ridgemont High.”

Davis anchors the Ass Pocket Whiskey Fellas. His son Justin, 26, handles guitar and megaphone. But most of the Whiskey Fellas are seasoned rockers in their 50s who rocked Clairemont in the ’70s and ’80s.

“When we first started playing together, our former cajon player would bring a chilled flat pint bottle of whiskey to each practice,” he says of the band’s name. “And when I was a kid my dad would smuggle them in the house in his back pocket since he wasn’t supposed to be drinking anymore. He referred to them as his ‘ass pockets of whiskey.’”

The six-year-old band is working on their third album of original material. Their live sets mix in their originals with classic country, bluegrass, traditional Irish, and Zeppelin.

The Field Irish Pub and Restaurant

Davis makes it clear Ass Pocket was not created in the wake of the Dropkick Murphys or Flogging Molly.

“We’re not riding any train. If anything, we are inspired by the old stuff by the Dubliners.”

Davis says that “Flying” Floyd Fronius is in the band because he plays fiddle...not violin.

“We wanted someone who could really play Irish jigs.”

The Ass Pocket Whiskey Fellas appear at the Field February 17.