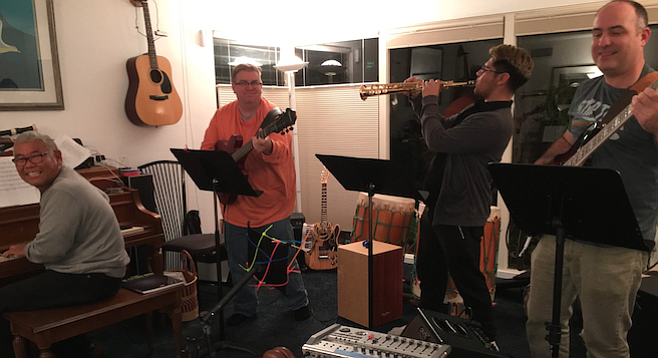 The annual festival has a musical side

The fifth annual San Diego Comic Fest makes its debut in a new venue, Four Points By Sheraton, running February 17 through 20. Music-themed events will include discussion panels, a live band trivia contest, and performances from groups such as costumed sci-fi rockers Digital Lizards of Doom and the Telenauts, who specialize in playing TV theme songs.

"I Don't Know How to Dance"

...by Digital Lizards of Doom

“We’re concentrating mainly on sitcoms and cartoons, including Sanford and Son, Barney Miller, Cheers, and the Odd Couple,” says Telenauts guitarist Armand Frigon. “I think the con crowd is looking for ways to connect to pop culture. TV theme songs are a perfect way to include everybody, as most of us have a history of watching as children and adults and can relate to those themes.”

Digital Lizards of Doom have three performance planned. “Friday, we’re doing a DJ set with dance remix songs of popular sci-fi movies and films,” says frontman Gabe Valentin. “Saturday is a DJ trivia party where people will try and guess the theme songs that we’ll be playing. Sunday is a party where we’ll produce a mixture of both original techno songs and remixes of video game soundtracks.”

Other musical guests include album cover painter William Stout (Beach Boys, Smithereens, Firesign Theatre, etc.) and illustrator Arlen Schumer, art director and contributor to Bruce Springsteen fanzines like Thunder Road and Backstreets. Both artists appear in a panel called Comics and Music Down at the Crossroads, concerning “where comics/cartooning and music have intersected in the past, and what the panelists would like to see in the future.” Other music themed panels will feature scripters of comics starring Metallica (James Hudnall), NOFX (Michael Aushenker), and Opeth (Spike Steffenhagen).

A café themed in tribute to comic legend Jack Kirby (Captain America, Fantastic Four, etc.) will host free Batusi lessons where patrons can learn to dance like Adam West’s Batman, while a trivia contest in the Kirby Café will be hosted by Digital Lizards frontman Valentin, who’s been a regular Comic Fest attendee.

“At the 2015 show, I had a wonderful chat with Neal Adams, who’s a hero of mine. I actually have one of his Superman Action Comics covers tattooed on my left arm.”