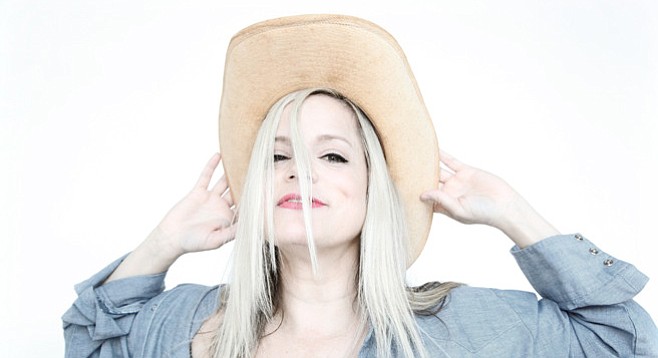 “The secret is puff pastry. But is it really a secret? A shoe would taste good inside a puff pastry.”

“I promise I won’t steal Berkley from you,” she says. “I’m just lucky I get to come back and play and record with him as often as I do.” Other former bandmates in San Diego who perform on the album include Bill Coomes, Dennis Caplinger, and Mike Spurgat, giving the songs a SoCal sound akin to locally recorded efforts like 2007’s A Million Stories. “I did most of the instrumentation on Right as Rain in Wimberley, Texas, at Yellow Dog Studios, but I did my vocals, Caplinger’s banjo, and Berkley’s guitars in San Diego.”

The 11-track album includes bluesy and honky-tonk-style numbers such as “I Brought My Pajamas, Let’s Get Drunk,” “Hot Tin Roof,” “Old Devils Can Die,” and “Beautiful.” As for the title, “The name Right as Rain is a lyric in the first track, ‘At Large in Tennessee.’ I’ve always loved that as an idiomatic way to say you’re doing quite well.”

In addition, “I was recently invited to perform as an official artist at SXSW 2017.... I’m super honored and am looking forward to playing a ton during the festival and going to as many panels as I can manage. Later this year, I’ll be taking the new record to Europe and the U.K. I think it’s gonna be a good year.”

“Amy Winehouse, Back to Black. This one is always in rotation. Some of it makes me agitated and uncomfortable but, to me, that’s a good writer making me respond to her songs.”

ANYTHING YOU WERE EMBARRASSED TO MENTION?

“I was listening to Ace of Base recently. Don’t you judge me!”

BEST ADVICE YOU EVER GOT?

“My mother told me ‘Don’t forget who you are.’ The tricky part is figuring it out in the first place.”

“eBay. I’m selling a few things. Anyone need a tent?”

“Island of the Blue Dolphins was the most incredible book about survival and resourcefulness. I still love books with that theme.”

QUICKEST WAY TO A MUSICIAN’S HEART?

“I was playing a show in Portsmouth, Virginia, when a naked man ran out of the bathroom, stood in front to the stage, wagged his business heartily, and ran out the door and down the middle of the street into the dark.”

BEST THING YOU EVER LET GO OF?

“I’m a pilot and have always loved flying. It’d be nice to achieve that without the expensive, cumbersome airplane.”

DO FRIENDS GIVE YOU ANY NICKNAMES?

“People call me ‘Babs’ as a joke sometimes. My friend Bernie calls me ‘Precious,’ in a completely mocking and ironic way. My friend AJ calls me ‘Babbalicious Neezbite.’ These are all fine.”

EVER CHEAT ON A TEST?

“I may have glanced at a schoolmate’s paper once or twice. But I loved school, I love learning. And I have a terrible conscience that keeps me up at night.”

“I’d like to take a couple acting courses and be in a play or musical.”

YOUR BEST DISH (AND WHAT’S YOUR SECRET)?

“It involves puff pastry, chicken, cheese, spinach, mushrooms, garlic, and more. The secret is puff pastry. But is it really a secret? A shoe would taste good inside a puff pastry.”