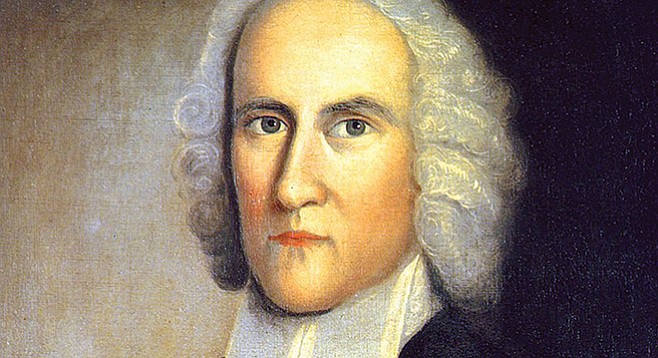 Before it was Princeton

Jonathan Edwards, president of the College of New Jersey, and the epitome of early American literature

The goings on of God were then seen in his sanctuary, God’s day was a delight and His tabernacles were amiable. Our public assemblies were then beautiful; the congregation was alive in God’s service, everyone earnestly intent on the public worship, every hearer eager to drink the words of the minister as they came from his mouth…. There were many instances of persons that came from abroad, on visits or on business…[who] partook of that shower of divine blessings that God rained down here and went home rejoicing. Till at length the same work began to appear and prevail in several other towns in the country…. In every place, God brought His saving blessing with Him, and His Word, attended with Spirit…returned not void.

— From Narrative of Surprising Conversions

Jonathan Edwards (1703–1758) was an American preacher and Congregationalist Protestant theologian who inspired the first “Great Awakening” in revivalist movements that swept the country in the 18th and early 19th century. Perhaps most famous for his sermon “Sinners in the Hands of an Angry God,” an example of early American literature, Edwards served as president of the College of New Jersey (now known as Princeton) for a brief time before dying of a smallpox inoculation. His grandson is Aaron Burr, third vice president of the United States.