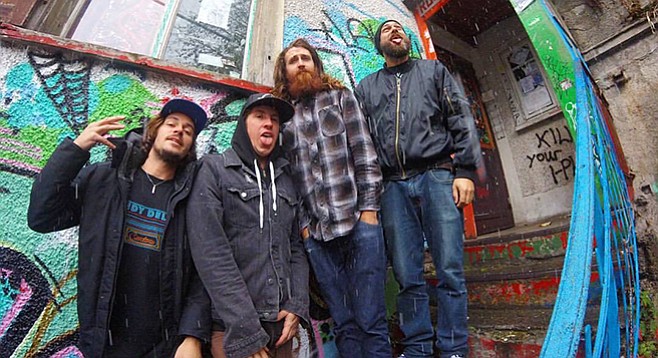 Clint Sobolik’s latest project takes on the nickname he picked up in his last band, the Whiskey Avengers.

“I squint a lot and I’m a man of few words, so I guess I just gravitated to it,” Sobolik says about his “Clint Westwood” handle. “Clint was married to my godsister for over a decade. I met Scott [Eastwood, Clint’s son] at Pebble Beach, like, 14 years ago hanging out at the pool. He was under 18. He was trying to get me to buy him and his lady friends alcohol. I politely declined. I didn’t want to piss off Josey Wales.”

Sobolik has no problem also being compared to Tom Waits due to his raspy vocals. “Tom Waits came from playing shit-hole bars surrounded by the underbelly of society. Those people are my friends and peers.”

Keeping it real has always been the first priority for the singer/songwriter. But the pursuit of “real” hasn’t always worked out for him. Consider the Whiskey Avengers, which threw ska, punk, and folk together in a rollicking stew.

“We played what we wanted to play. It was described as ‘booze-soaked ska.’ It was a curse and a blessing. You get your loyal diehard fans, but ultimately if you don’t ride a wave or fit into a genre, you’re not necessarily marketable. We hit it hard for over ten years. We had three albums and success all over the state. But we weren’t traditional ska enough for the hardcore ska scene and we weren’t reggae-friendly enough for the California reggae scene. The Whiskey Avengers aren’t done, but we only play a couple times a year.”

His new project, the Clint Westwood Band, has banjos, but don’t compare them to the Lumineers.

“Folk has become mainstream and bland. The wussification of music is across the board. There are few who want to speak the truth about the insanity we live in. The world has enough love songs.”

The Clint Westwood Band sounds nothing like the Ramones. “At this point, punk rock is a mentality. It’s an attitude and a way of life, not just a style of music.”

His album Cult Country is available for download on Bandcamp and on most streaming sites. It addresses class war, existential doom, and debauchery.

“I’m trying to stay positive and also not put up with bullshit.”

Yet Sobolik can see a likeness between his plight and that of the right-wing movie cowboy who inspired his nickname.

The Clint Westwood Band appears Saturday at 3 p.m. at the Tipsy Crow.