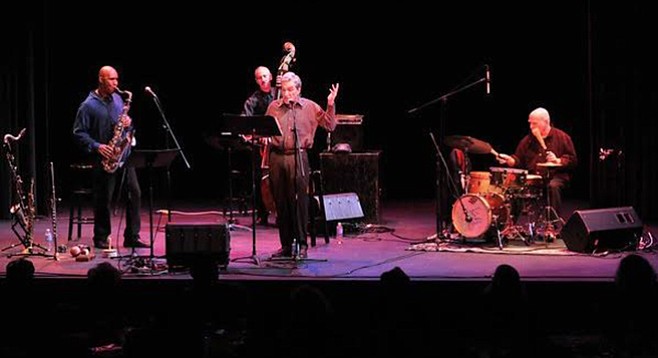 Music before poetry for Robert Pinsky

Former poet laureate tours through town behind his Poemjazz

It turns out that Robert Pinsky is also a sax player. We spend minutes talking about the beloved Buescher 400 series tenor sax he once owned but that got stolen. “Tenor sax,” he tells me by phone from San Francisco, “it’s the most ironic instrument. It has swagger.” He says he still plays, occasionally. “Mostly keyboards. But I still go through phases where I find myself getting out the horn.”

National Endowment for the Humanities recipient and former three-term United States Poet Laureate Robert Pinsky will kick off the Point Loma Nazarene University Writers Symposium by the Sea on Tuesday, February 21, with what he calls “poemjazz”: him reading some of his poems while backed by, on this date, the Point Loma Nazarene jazz combo. Pinsky recently recorded the material with jazz pianist Laurence Hobgood, titled Poemjazz, and released it on Circumstantial Records.

As a child, he says, it was music that came first, not poetry. “I had a lot of academic problems in grade school. One thing that held me together, that I could feel good about, was music. I played dances, bar mitzvahs. I had a vision right up to college that I would become a great jazz musician.” When that failed to materialize, there was poetics. “All along,” says Pinsky, “I was thinking about the sounds of words, and of rhythms.”

This background is told in explanation of the process of recording with Hobgood, of reading the words live against a web of piano improvisations. Pinsky says the two of them recorded together in the studio, like a band, but with no music — Hobgood composed his parts on the fly with only a printout of Pinsky’s poems in front of him. In contrast to the measured, friendly tones of the 76-year-old Pinsky over the phone, Pinsky’s voice on the recording sounds ageless. “The chops haven’t deteriorated. I just can’t go as long. An hour gig, that’s about it.”

Born in New Jersey, Pinsky lives and teaches in Cambridge, Massachusetts. He and Hobgood are on the road whenever possible, performing “poemjazz” at venues across the country. Some of the poetry is dark and pensive; some ironic, and not without humor: Shakespeare was almost certainly homosexual/ Bisexual, or heterosexual, the sonnets/ Provide no evidence on the matter. Mr. Pinsky laughs aloud when I read this line of his back to him.

“We can make the music funny sometimes, too.”

As for the future of Poemjazz, will there be a volume two? Yes, with more musicians, Pinsky says. “Our goal is to do this with Laurence and maybe a bass player. That would be the next step.”