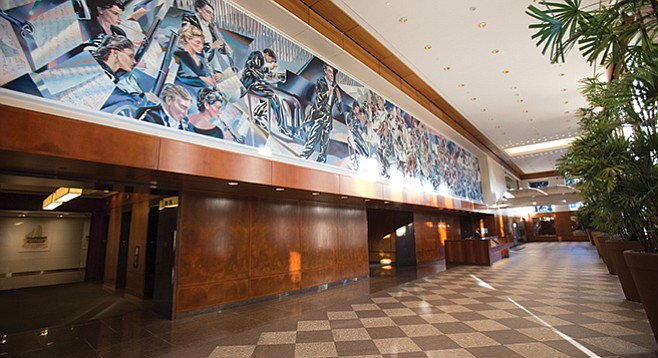 Classical music hidden in the city

To find classical music in this town you’ve got to want to find it.

Without consulting Google, can you say where Symphony Hall is? The only people who can answer this are people who already go to the symphony. Should you be wondering, it’s on B Street between Seventh and Eighth avenues in the Symphony Towers building.

Where can you find the transcendent Mainly Mozart Festival Orchestra? This one is different because festivals are transient by nature, but the answer is Balboa Theatre. Which is where, again? Horton Plaza.

Classical music in San Diego is hidden in the nonspecific titles of the venues except for Symphony Hall, which is literally hidden inside another building.

The Symphony Towers were built around the old Fox Theater, which serves as the home of the San Diego Symphony. The original wall of the Fox is still visible inside the Eighth Avenue artists’ entrance to the building.

If you were to drive down B Street, there is nothing that lets you know that Symphony Towers is a performance venue. If you walked by, you would see what looks like the lobby of a normal high-rise though it happens to have a mural of an orchestra and some signage about the San Diego Symphony.

San Diego does not have a classical music venue such Los Angeles’ Disney Hall, San Francisco’s War Memorial Opera House, or the Sydney Opera House. Those venues have architecture that make them recognizable within the context of their cities.

New construction is not helping the matter. The La Jolla Music Society has a new performance space being built at 7600 Fay Avenue in La Jolla. It’s called The Conrad? Yes, The Conrad. What happens in The Conrad? I guess you’ll have to ask him, but I think there will be music.

I get it, I really do. Conrad Prebys donated about half of the $25 million construction budget for the building, so it is named after him. And the full name is the Conrad Prebys Performing Arts Center, though the La Jolla Music Society is promoting it as The Conrad.

The fact remains, in San Diego there is no visible reminder of classical music. In spite of this, the classical music scene is vibrant for anyone who goes looking for it.

San Diego Public Libraries present several performances per year at branches including the new downtown branch, which has a fantastic performance hall. Synagogues and churches across the country routinely host concert series. Two of which are the concert series of The Tifereth Israel Community Orchestra at the eponymous San Carlos synagogue and the Masterworks Chorale at First United Methodist.

Though the colleges and universities in San Diego County don’t have particularly strong music schools, there are still a fair number of concerts on San Diego campuses. A case could be made for UCSD being the strongest music school, but they are predominantly experimental in their approach.

We don’t consider a concept car to be a classic, and I don’t call experimental music classical music. Even so, the La Jolla Symphony is a fine establishment and its existence is made possible by its affiliation with UCSD.

When it comes to opera in this town, you must be on your game to catch it. As of this year, opera happens on only 12 nights a year at the Civic Theatre. The San Diego Opera is also producing what it is calling chamber opera. However, the first installment, Soldier Songs, falls into the experimental music category. It was not well received during its three-night run at the Balboa Theatre in November last year, and ticket sales were poor.

A few other opera productions on a much smaller scale

Point Loma Opera Theatre (at Point Loma Nazarene University) and Pacific Lyric Association (at the California Center for the Arts) put on performances of opera with orchestra and costumes. But the gap, which was once filled by the long-defunct San Diego Lyric Opera, is wide between these two plucky upstarts and the product put out by San Diego Opera.

When it comes to chamber music, there are almost too many options. The La Jolla Music Society and the Mainly Mozart Festival provide top-class chamber performances in the summer. During the rest of the year there are multiple chamber collaborations, such as Camera Lucida and the Aviara Trio, which perform in several different venues.

The San Diego Symphony continues to be the primary pillar of support for classical music in the county. The symphony is well funded and has increased its artistic footprint over the past decade or so.

This year is the final season under music director Jahja Ling. There is a sense of excitement and anticipation as we await the naming of a new music director. Maestro Ling has taken the orchestra to a level it hadn’t reached before. The organization is on the brink of becoming something special in the symphonic world.