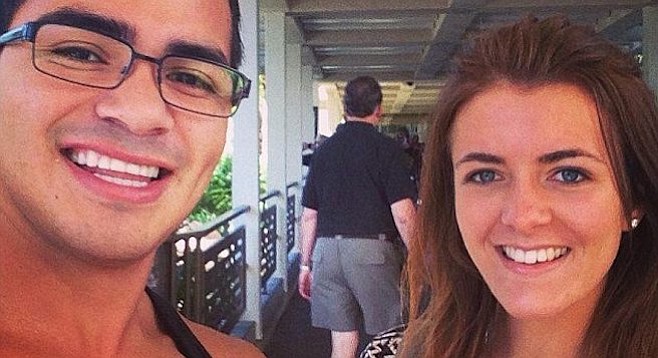 Meza was living a double life. He met Merendino, then in his 50s, online, and they became involved in a romantic relationship. At the same time, Meza was also involved in a long-term relationship with Taylor Marie Langston, a Chula Vista High graduate who was pregnant with Meza's child at the time of the murder.

Merendino's death came two days after he closed escrow on a luxury condo in Rosarito. Meza produced a handwritten note that made him sole heir to Merendino's estate, including the new condo.

Stand-up paddleboarders can be tiresome

Touched By An Angel

Meza was living a double life. He met Merendino, then in his 50s, online, and they became involved in a romantic relationship. At the same time, Meza was also involved in a long-term relationship with Taylor Marie Langston, a Chula Vista High graduate who was pregnant with Meza's child at the time of the murder.

Merendino's death came two days after he closed escrow on a luxury condo in Rosarito. Meza produced a handwritten note that made him sole heir to Merendino's estate, including the new condo.

A fine time for Phở Hóa

Touched By An Angel

With the father a predator, and a totally depraved mother, an innocent life hangs in the balance. Hopefully, the mother will give up the baby for adoption. It would be the ONLY way that this completely innocent child could have a chance at a normal life.

I know this sounds harsh, but hopefully the child never learns of the biological parents and the horrible acts they perpetrated.

JustWondering: And who will adopt this child? This gets down to the big debate of the day: nature or nurture? Do people inherit bad traits or do they come as a result of a bad upbringing? I'm sorry, but I believe in the nature argument. I believe anti-social behavioral traits can be inherited, although environmental factors play a role, certainly.

I studied psychology in the 1950s, when Freud was The Authority. Scholars had the idea that children were born with a clean slate, and their lives would be determined wholly by their environment. I took a course from a professor who dared to take the nature position: we can inherit bad traits. During the 1950s, or perhaps before, there was an excellent play named "Bad Seed," or something like that, offering the inheritance theme. I can remember people denouncing the thesis, hailing the tabula rasa or clean slate argument. I couldn't buy it then and still can't.

It's a complicated subject and I am a neophyte in psychology. This may be debated for centuries. Best, Don Bauder

When I was growing up I had a friend and he had a sister a couple of years older. We all grew up together. My friend became a doctor and his sister became a prostitute. Same parents, same stable home life, same life opportunities. I, on the other hand, was adopted with no birth parent information and ended up in a "broken home" environment. I became successful and stable in spite of any hardships. Was I a clean slate? Or was my DNA at play? I don't know.

AlexClarke: Yours is a puzzling situation. The best studies I have seen are the identical twin studies by the University of Minnesota. They trace the lives of identical twins that were separated at birth. The people who raised them had disparate backgrounds, but there have been amazing behavioral similarities between separated identical twins. Best, Don Bauder

Freud's thesis, that brutal nineteenth century upbringing caused adult neurosis, has won the day. No reputable scholar today argues that a lack of parental violence "spoils" the child, but this was once axiom. Elsewhere Freud argues that the incest taboo is instinct, and therefore genetic. No one argues one side of the nature versus nurture argument exclusively, both obviously influence, the proportion is all that is in question. But in the public sphere, those that argue for nature are at best nihilist, since human genetics can't be easily improved. At worst, some argue for genetic "improvement", by racist atrocity. The recent memory of this partly explains your professor's strident opposition to genetic explanations of "character". Those who teach, or write, naturally must focus on learned behavior.

Psycholizard: You make good points, although I am not sure I enjoy being called a nihilist. But you are right: it's not nature OR nurture. There is both in a person's development. I'm just more -- but hardly entirely -- a nature believer. Best, Don (Nihilist) Bauder

I was too broad. But teachers who argue that adult behavior is innate at birth, and learned behavior isn't important, might be depressed and need a vacation. I want them to know they change lives, almost as much as those who raise us in our earliest years. We can't change genetics, we can educate better.

Psycholizard: Those who put the most emphasis on nature, such as myself, believe that parents and teachers don't deserve all the blame for a bad child. It's been my experience that mothers who have a lot of children say they are all different from birth on.Best, Don Bauder

Don, your post was brief and didn't say what will happen to the beauteous Taylor Langston, who knew of the crime. Unless she was somehow directly involved, she may face no charges at all.

The matter of this being a federal crime was news to me. I'd have thought since it was a killing in Mexico, the fact that it involved two US citizens had no effect. And so I'd have assumed the Mexican "justice" system would have dealt with Meza. I do also wonder just what "life" in a federal prison means. Is there some sort of parole in the federal law?

Langston earlier pleaded guilty to obstruction of justice for willingly and knowingly lying about Meza's whereabouts. In certain circumstances, the U.S. has legal jurisdiction to prosecute crimes committed in other countries when U.S. citizens are victimized. Best, Don Bauder

Visduh: I realize I didn't answer one of your questions. Meza got life in prison plus 20 years for obstruction. I don't know about the possibility of parole. Best, Don Bauder

Two answers: 1. In this case it was life plus 20 years for the obstruction conviction.

And, “Under the Sentencing Reform Act of 1984, Congress eliminated parole for federal defendants convicted of crimes committed after November 1, 1987. But while federal prisoners can no longer look forward to parole release, they may nevertheless earn reduced terms for good behavior. And, even though federal parole has been all but eliminated, at the time of sentencing, judges can add a period of “supervised release” to be served at the end of a defendant’s prison sentence.”

Too bad he isn’t sentenced to a Mexican prison for the crimes he committed in Mexico. While life in a U.S. prison isn’t a cakewalk, considering the highly depraved and brutal killing of his lover for financial gain, Meza deserves the “life” he chose in a Mexican jail.

JustWondering: Yes, it would seem that life in a U.S. prison may be too good for him. Mexico prisons are horrible -- just what Meza deserves. Best, Don Bauder

Steve Vaccenzi: He is greed-prone and violence-prone -- a terrible combination. Best, Don Bauder