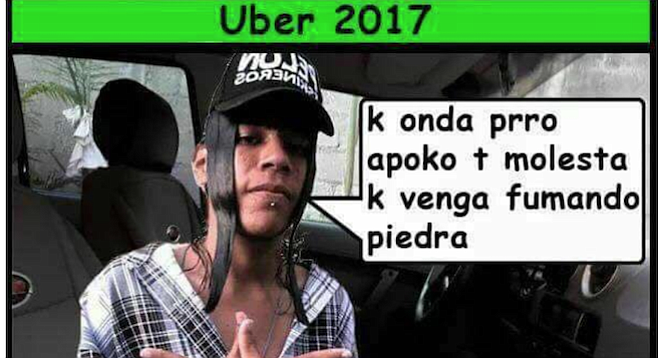 There is a vast difference between what Uber was when they started in Tijuana in 2015 and what the company is now. Cars were new and clean. Drivers used to offer water, mints, candy, or phone chargers. Most drivers were courteous and asked passengers what radio station they would like to listen to; some drivers would even get out of the car to open the doors. Uber quickly won the hearts of tijuanenses, as citizens preferred the convenience of the ride-sharing app to the beat-up taxis that had to be hailed from the sidewalk.

Taxis weren’t happy, and with the help of the government, they tried to shut down Uber operations in Tijuana. A legal tug-of-war started between Uber and taxis, who fought and protested to protect their territory. Citizens overwhelmingly supported Uber. In July 2017, the conflict came to a head when taxi drivers at the border beat up and hospitalized tourists trying to order an Uber ride.

The San Ysidro border crossing in Mexico is now patrolled to avoid confrontations between Uber drivers, taxis, and customers. The PedWest border crossing installed signs adjacent to the taxi pickup area that read “zone for applications and alternative transit.”

Since this summer, a decline in the quality of Uber service has been noticed. “That was the worst Uber ride I had,” my girlfriend told me when she got home in August. “He was rude, he smelled bad, and he was blasting horrible music. I asked him to turn it down or change the station. He adjusted his mirror, shrugged, and barely turned it down. I was afraid to speak after that.”

In the Facebook group, drivers post screen caps or photos complaining of the worst clients they had or about customers that only go a few blocks away. The minimum fare is 28 pesos, less than $2. Clients post pictures complaining about certain drivers attitudes or about not getting picked up. Others try to sell, rent their cars, or hire Uber drivers. Some shady accounts offer to sell Uber credits or paid rides.

After I posted the question of who were the best or worst clients, a driver responded, “I just kicked a guy out for being a princess.” I asked him to elaborate. He wrote back, “For safety when I pick up a person, I lock the doors and open the passenger door. The dude kept trying to open the back door and then came up to me asking if there was something wrong with my back doors. He got in with an annoyed expression and said ‘agh, whatever, let’s go.’ I told him to get out, I already canceled the trip. He asked me why, to [which] I responded because I want too [sic].”

Another driver responded, “The best, the one that invited me to drink and paid for the prostitutes. The worse, the one that took a shit in the backseat."

My post didn’t get as much response as a popular meme that reads:

The notorious Tijuana taxis aren't necessarily any safer than rideshares. Have you ever chanced to take a trip in a TJ taxi? Are these cars any worse? I don't claim to know, but in the Third World, and don't forget for a moment that TJ isn't anything like the US, usual norms just don't apply consistently.

Precisely what regulations would save me from any of these bad experiences from happening in taxis?

Pretty much every Uber ride I've had has been great. I've had more bad experiences in fewer taxi rides.