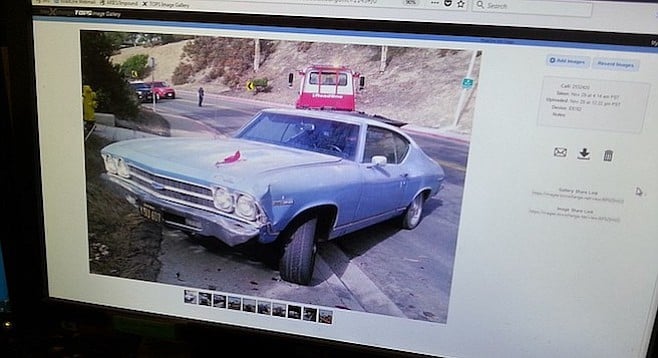 The impact from a hit-and-run collision was so strong that it pushed a 1970s Chevelle, parked on La Jolla Shores Boulevard, onto the sidewalk. Owner Jeff Sevadjian said the incident occurred between 7:05 a.m. and 10:40 a.m. on November 29. Police cited the car for obstructing traffic and had it towed by noon, hours before Sevadjian left Scripps Neirenberg Hall at 5 p.m. and discovered his car was missing. 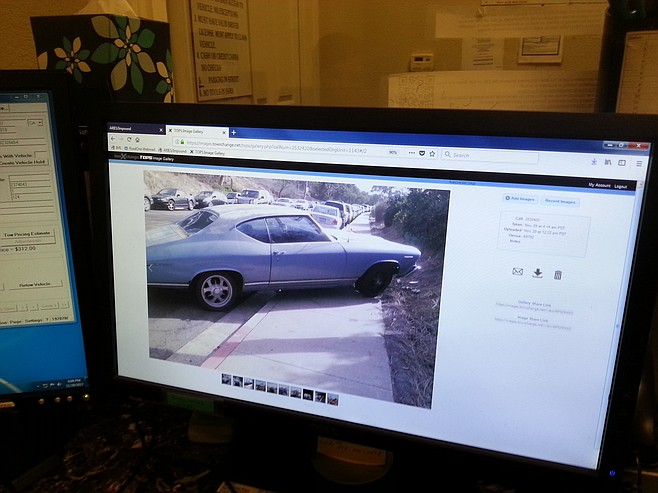 The Chevy had to be towed because it was blocking the sidewalk.

From pieces of taillight cover bearing the name “Toyota” he found at the scene and white paint at the impact area, Sevadjian surmises the white Toyota was going fast in reverse when it hit his car. An email to all at Scripps turned up another employee who had seen the Chevelle on the sidewalk and noticed a person across the street taking pictures of damage to the front quarter panel of a black sedan at the same time the Chevrolet was being towed. Sevadjian obtained photos of his car from the towing company.

Anecdotes from others at Scripps show a pattern of hit-and-run damage to cars on this stretch of La Jolla Shores Boulevard, between El Paseo Grande and UC San Diego Coast Apartments, along with break-ins and vandalism. Many UC San Diego and Scripps students and staff park there to avoid hefty parking fees and parking shortages on campus.

In September, a Scripps affiliate noticed five or six instances of broken car window glass on the sidewalk in the area; in October, a Scripps fellow’s car was hit while parked. In 2015, a Scripps employee reported his truck stolen between 11:30 a.m. and 3:30 p.m. from where it was parked on El Paseo Grande. The same year, a phone and laptop taken from cars in the vicinity were found in a dumpster in Bird Rock, and two more cars were rear-ended near Naga Way in hit-and-run incidents. In 2014 a staff member at Southwest Fisheries saw a Mercedes spin out of control and damage seven cars. Birch Aquarium employees have also experienced multiple instances of theft of personal items from their cars.

In this case Sevadjian filed a police report, but many do not.

The reporter works at Birch Aquarium.

UCSD has been short on parking for almost as long as it has existed. Supposedly it encourages ride-sharing and use of public transportation. But, typical of nearly every workplace in San Diego, few employees use either. The better paid they are, the less likely they are to use anything other than a car, and drive solo.

So, the area right around the campus is, and has been for a very long time, filled with cars parked on the streets. These incidents are a reflection of the overcrowded and curvy streets in the area, and unfortunates who choose to park along them. It really takes the bloom off of the idea of working for that ultra-prestigious UC campus.

Having had some experience with UCSD parking about twenty years ago, I noted that the operation wasn't trying to accommodate its employees or students in a positive way. It had a Gestapo-like parking enforcement patrol that would pounce on any improperly parked car within about five minutes. Forget to display your dashboard parking permit placard, and bang, you had a citation. The odd thing was that parking spaces there were at a premium in the morning, but by early afternoon the lots cleared out. (Wonder why? I really do.) So, if you were a later-in-the-day student, a parking permit that allowed almost unlimited access to lots wasn't all that costly. The full-day permit was outrageously expensive. I shudder to think what such a permit costs now.

But for those who toil at Scripps and have to be there early in the day, the choice is to pay, pay, pay, or to avoid. And avoiding the cost of a campus permit, which might not be all that close to the destination, has its nasty downside. I sympathize.

Using public transportation to get anywhere in San Diego is a hard thing to do. I had a neighbor, before trolley service, took the bus to work (college area to downtown). It took him over an hour and a half each way. Bus service was worthless on holidays and weekends as it assumed that everyone that worked downtown worked Monday - Friday. In inclement weather it was impossible to not get wet.

Why didn't he move close to downtown, like a lot of people are doing to avoid a long daily commute?

At that time there was very little housing available closer in. He had a wife and four children and the college area was the best place (at the time) to raise a family.