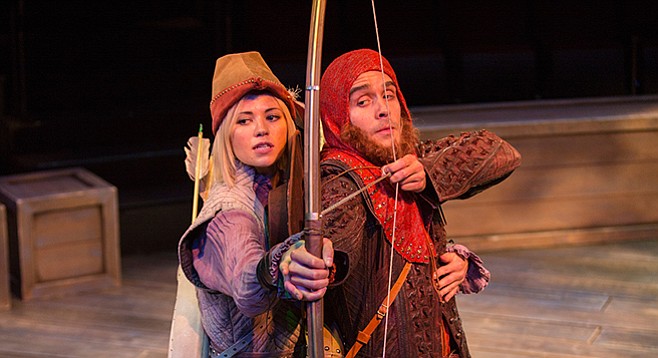 It isn’t the 1938 swashbuckling movie, The Adventures of Robin Hood, where elongated shadows of Errol Flynn and Basil Rathbone fence on a wall. It’s more comedy than drama, and more Disney than Monty Python. It does have an agit-prop-like message, but without much agit-, and less prop.

As opposed to a morality play, it’s a morality farce, always entertaining, though puddle-deep.

In theater, the name “Ludwig” evokes instant recognition. He takes a familiar subject — as with his The Hound of the Baskervilles at the Old Globe — and gives it a friendly little warp with an occasional glimpse of the furnace. His Robin Hood skewers some expectations but keeps the spirit of the legend intact.

It’s 1194. Richard the Lionheart’s at the Crusades. Thanks to the sudden, fortuitous demise of William de Longchamp, Richard’s younger brother, John, becomes proxy-king of Briton. Under his reign, the rich steal from the poor (and probably stole their health coverage). Dissenters face torture and execution for the slightest disobedience.

The play flashes back to Robin’s birth, then in short scenes scrolls through his early youth as an infantile Prince Hal sporting with local damsels. He’s a Saxon. Marian begins as a xenophobic Norman who sides with the invidious Sir Guy of Gisbourne (Basil Rathbone played him in the Warners’ movie as if he dined on broken glass, sweat-soaked leather, and a nice Chianti). Marian says she has an open mind but thinks all Saxons are swine. Then she changes.

Suzelle Palacios plays Doerwynn, a new character. While everyone else is a subject, a known quantity, she’s the object of their kindness and cruelty.

Ludwig takes an impish liberty with the sheriff of Nottingham. Though usually played as a Medieval Nazi, Kelvin Cahoon makes him an inept factotum. He can barely hold a sword, let alone wield one, and waxes beet-red astonished when common folk don’t heed his every word as gospel.

Ludwig takes an even greater liberty with Robin and Marian (title a favorite movie of mine, which casts a dour, de-mythologizing rinse over the legend). In effect, Ludwig inverts them. Robin’s nowhere near a great swordsman. Nor is he the finest archer in the land. He begins as a boy and remains one, but with a growing rage against injustice.

For Marian, Ludwig may have taken his cue from Ridley Scott’s movie Robin Hood (2010). Kate Blanchett plays Marian larger-than-life, but somehow credibly: she runs the estate, has deep feelings — can be both forthright and tender — and roars into battle with hair aflame and justice in her heart.

Meredith Garretson’s stalwart Marian becomes disillusioned with the establishment and joins Robin and his Merry Men. But, it turns out, she has Errol Flynn’s Robin Hood in her DNA: crack-shot and swords-person, and fiery combatant against injustice. The always comical Daniel Reece is Robin Hood in name; Garretson’s Marian is Robin Hood in deed. In this character-driven piece, Maid Marian drives the others into action (with a subtextual message for today: follow the women).

Director Jessica Stone runs her eight-member cast on a steeplechase up and down the stairs and through the voms of the Sheryl and Harvey White Theatre. Robin Tarzan-rides one of the dangling ropes, which become tree trunks, and, gathered together, form a great oak. The energy is non-stop.

Craig Noel once said he loved the old Cassius Carter because “you can’t hide on that stage. The eye sees everything.” This is a plus for Gregg Barnes’s costumes. The details on Friar Tuck’s grimy brown monk’s habit — which you can almost smell — or Guy’s diamond-studded uniform can receive the attention they merit.

Best of show: someone (unnamed in the program) devised a way for actors to pull back a bowstring with what looks like an arrow and release it. Then sound designer Fritz Patton supplies an appropriate whoosh, and an arrow suddenly appears on another actor. Vivid stuff, with impeccable timing.

In other ways, the intimate theater-in-the-round’s a hindrance. The famous archery contest, where Robin bull’s-eye’s an arrow already in the bull’s-eye, has no size. It’s just a row of seated actors watching an arrow whiz by, as if at a tennis match, or at Ascot in My Fair Lady. The theater also exposes the timid, you-tap-now-I-tap fight choreography.

Ken Ludwig’s Robin Hood is always lively and often funny. But the humor subverts its “to the barricades” message. The conclusion’s foregone. Good evicts injustice from Nottingham and its environs, for a while. But it’s too facile, the villains are just straw men. One suspects that real injustice is made of far sterner stuff.

Playing through September 3. Sunday at 7:00 p.m. Tuesday and Wednesday at 7:30 p.m. Thursday through Saturday at 8:00 p.m. Matinee Saturday and Sunday at 2:00 p.m.; lajollaplayhouse.org