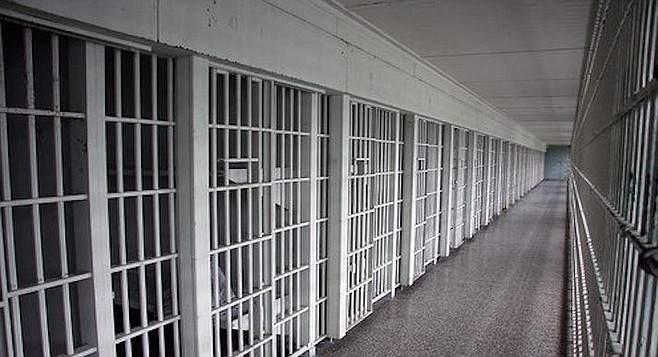 Convicted murderer and longtime member of a powerful white supremacist gang, Elliott Scott Grizzle, has filed a lawsuit against the County of San Diego for improperly placing him in solitary confinement.

According to his handwritten complaint, filed in federal court on April 25, Sheriff's deputies placed Grizzle, without providing him any reasons as to why, in solitary confinement upon his arrest on August 3, 2016. He requested corrections officials to review his segregation on numerous occasions. In addition, states Grizzle's complaint, his segregated cell is brightly lit and is positioned near a loud television set, and even louder inmates, which in turn has resulted in a loss of sleep.

In March 2017 a jury found Grizzle guilty of murdering Brent Adler during a May 2016 botched robbery attempt. According to news reports, Grizzle and two other accomplices had gone to the home off Tommy Drive in San Diego's San Carlos community to buy drugs. Once inside, the men tied up the occupants and began to ransack the home. Adler arrived shortly after and was shot three times and died later.

Grizzle was found guilty of murder, and felon counts of robbery and burglary. He faces 198 years to life in prison under California's Three Strike Law and is scheduled to be sentenced on April 26.

The verdict is only the latest charge on what is a long and violent rap sheet.

Federal law enforcement officials arrested Grizzle and his wife in a 2002 crackdown of the white supremacist gang, the Aryan Brotherhood, of which both were members of. According to the 2002 complaint, Grizzle was charged with racketeering, and for plotting and committing the murder of a fellow gang member, Aaron Marsh while in prison. In addition, Grizzle was accused of ordering an Aryan Brotherhood member to murder another inmate while incarcerated in a Central California prison.

Grizzle's incarceration dates back much further. According to the criminal charges filed by the San Diego County District Attorney's Office, Grizzle was convicted of burglary, assault with a deadly weapon in 1991 and later charged with manslaughter as well as several firearm-related charges.

Why is this guy in a local County jail when he should be in prison? Anyway, the best response to his complaint is to tune that TV to a language that he doesn't understand and then turn up the volume.

He hasn't been sentenced yet.

Anyone else like me who wonders how he'll fare in the joint? I know there are white, black, Hispanic, etc. gangs in prisons that watch out for each other. But heading to some max or medium-security joint with a reputation as a white supremacist, and having no prospect of coming out alive, must be terrifying. That is unless he's convinced himself that he's invincible. But some overweight dude thinks that, he's nuts. I'd say his prospects are very poor.

Put him in with the Crips or Bloods. NHI no loss.