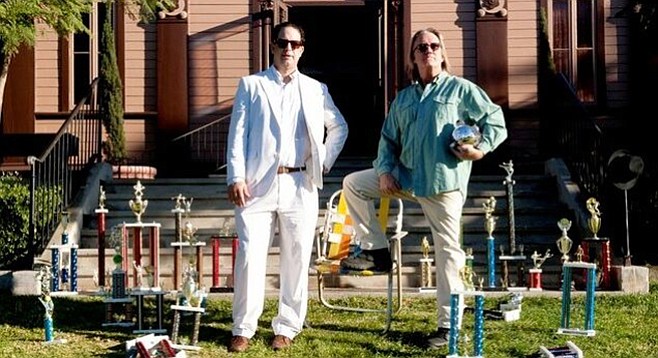 Leaders in the Clubhouse include the anti–San Diego stuff

Snubbed by the San Diego Music Awards — but so what?

“Our sound is like the stupid man’s Randy Newman,” says drummer Spud Davenport (Messy Necessities, Shamey Jays), one half of comedic power-pop-rockers Leaders in the Clubhouse.

“Or what if Warren Zevon joined Weezer,” offers pianist Charlie Recksieck (Bigfellas, LITC). “Although a reviewer was trying to take a shot at us with Rage Against the Millennials, and I might stand by that one.”

The duo is working on a new full-length at Davenport’s Escondido studio. “We got snubbed at [the San Diego Music Awards],” he says, “plus San Diego lost the Chargers, so I think the new record may have more anti–San Diego stuff on it.”

The Chargers-inspired track is titled “WWJD (What Would Junior Do?).” “I’ve got a huge beef with the NFL overall,” says Davenport. “The trick is saying something thought-provoking, not just nasty. I feel that there’s a definite correlation between the importance of music and the importance of sports in San Diego.”

Leaders in the Clubhouse, "LawnChairs"

Two songs from the band’s previous album Won were heard in the film Last Call at Murray’s, a comedy about the last night of a bar that’s going to close.

“‘She Gets Loud’ was used in a funny love scene, and ‘These Goddamn Devices’ was in a scene where things were just going wrong,” says Davenport.

According to Recksieck, “It paid okay. Film placements are really half about exposure for your music as much as getting a payday. Nobody’s going to get rich on one or two placements unless it’s in a Transformers movie or something like that.”

Both insist they’d give the movie two thumbs up, even if their music wasn’t in it. “After the film’s premiere in L.A.,” says Recksieck, “we were in a room with everybody who worked on it for months, and we told them the movie was great...it was such a treat to not to have to lie to them!”