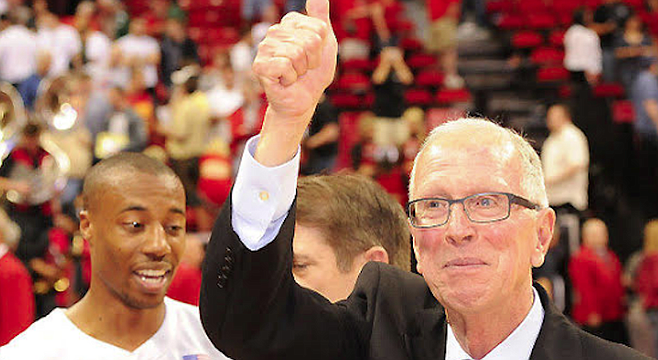 Given last month's abrupt demise of Balboa Park's Hall of Champions, retiring San Diego State University head basketball coach Steve Fisher will have to settle for the virtual Valhalla of the heart that the city's well-moneyed sports establishment reserves for its triumphal heroes, though he gets to keep their money.

Fisher, now 72, arrived in town 18 seasons ago, two years after his ouster by the University of Michigan amid a scandal involving freebies provided to well-heeled boosters.

"The announcement came two days after a Kansas law firm hired by the university to investigate the Wolverines basketball program issued a report that called into question Fisher's role in arranging complimentary tickets for booster Eddie Martin," reported the Associated Press in an October 11, 1997 story.

"Fisher told investigators with the Bond, Schoeneck & King law firm he was responsible for only a few of the 32 complimentary tickets Martin received during a three-year period," said the account.

"But investigators found that Fisher made out 16 of the passes, and that his secretary or other clerical workers made out 10."

Word around San Diego was that Fisher, hired here in 1999, was obtained on the relative cheap by SDSU, but his financial status changed as he revamped the school's basketball program, in the process making friends with wealthy university donors who have increasingly supplemented his state salary.

As of 2015, Fisher's total state pay and benefits totaled $386,167, per the website Transparent California.

The coach's pay is governed by a September 2006, employment agreement, along with subsequent extensions, the latest of which was set to expire next year.

The original deal called for Fisher to get a state-funded salary of $208,620 through June 2007, with a yearly "merit increase of 5% of base pay or top of the Administrator IV salary range, whichever is lower," plus benefits, including pension.

In addition, "University shall provide Coach a total of two (2) courtesy automobiles and/or automobile stipends in accordance with the Department of Athletics' established policies," per the September 2006 contract.

"Gasoline costs for business mileage are reimbursed subject to the Department of Athletics' established policies. Repairs within the insurance deductible amount are Coach's responsibility unless the accident occurred while on University business and University accident reports have been filed."

In another form of compensation, "In order to advance the public relations interest of University and enhance recruiting, University shall make available to Coach for basketball camps the use of University gyms and related facilities," the contract says.

Other consideration included "$25,000 per year for shoe/apparel (i.e., Nike) compensation," and agreement by the university to announce in 2011 "that Associate Head Coach Brian Dutcher will be named the 'Head-Coach-in-Waiting.'"

Dutcher is a long-time Fisher associate dating back to their days together in Michigan.

Under the terms of his 2014 deal, Fisher was also eligible for $10,000 bonuses, including those for being named Mountain West Coach of the Year and "winning 20 or more games in a season."

Gosh, Matt, are you sure about all this Michigan malfeasance and gigantic salary paid to SDSU's basketball coach? I heard multiple announcements about "iconic" Coach Fisher's imminent retirement last night and today on KFMB Channel 8 and there wasn't one negative word about the guy. Then again, I think all the sports reporters are SDSU grads, so maybe they were just being loyal to their alma mater. But could this be some kind of trend? First SDSU's President said he's leaving, and now Coach Fisher is out. I'll try Channel 10 tonight.

If if weren't true, Matt Potter would not have written it. Local TV stations often do "puff pieces" to avoid controversy and doing honest reporting. The READER doesn't do that.

Dwbat, you have just provided the San Diego Reader a sterling equivalent of the New York Times' excellent motto, "All the news that's fit to print." "If it weren't true, Matt Potter would not have written it."

Lacking a wink-ey emoji, you may have misinterpreted my sardonic comment: we have full confidence in Potter's research and reportage. But you are dead right about local TV news' reliability. Except for traffic accidents, it is hard to get Barbie and Ken news readers to deliver the whole truth to viewers.

Remember how, five years ago, there was some outrage at the size of the salary of the new SDSU president, Hirshman? He was getting $400K a year, with $50K of that provided by donors. That was the highest pay package for a president in the CSU system. More recently his pay has climbed toward $500K.

But, here's the basketball coach being paid three times the salary that the president was paid at that time. Where's the outrage about that? Ans: there really isn't any. Howcum? This is just the way it goes in pro sports--and make no mistake that college basketball is pro sports. Who are these donors who come up with an extra $ 3/4 million a year? If those funds were channeled into the academic program on campus, it would make a major difference in the number of classes offered, the quality of the faculty, and a host of other features. But that would never happen. Sports rule, and don't ever forget it.

So, now we know why Fisher stayed on to age 72. You just don't walk away from that kind of lucre. Had the past season been a better one, he likely would not have decided to leave. It's good to go out at the top, and if you cannot do that, at least leave before the bottom falls out.

visduh, Here is a philosophical question. If I choose to donate a large sum of money to a university, should I not have a say as to how that money is used?? Should I not be able to specify its use for say an expansion of an athletic facility or perhaps, as in this case, a bump in compensation for an outstanding coach, possibly a basketball coach as in this case??

You have partly misinterpreted my comments about those donations. Yes, if those donors want to give tens or hundreds of thousands of dollars to stuff in the coach's pockets, they should be allowed to do so. That's what the campuses call "earmarked" donations. And it happens all the time. Many universities, however, prefer to keep the donations from being committed to specific applications. But they do accept any and all donations that come from legitimate donors.

What I was questioning is why those folks will give so generously to provide a princely salary to a coach. I doubt that they would give much or anything to support the academics on campus. Their identities are a mystery to me, and many of them probably want to keep it that way. It's just a question of values, as in what the role and function of a university should be. Are sports more important than the other things done on campus? I'd say they are, given the disparity in salary between the president and one of many coaches.

More a question of ethics than philosophy: you might be able to direct your daddywarbucks to the History Department or the Anthropology Department or the Athletics Department, or to endow a Chair to be filled by a qualified academic, but no, donors to universities should not be able to direct funds to "bump"compensation for anyone, especially sports coaches. That this practice is tolerated at SDSU is a black mark on the school.