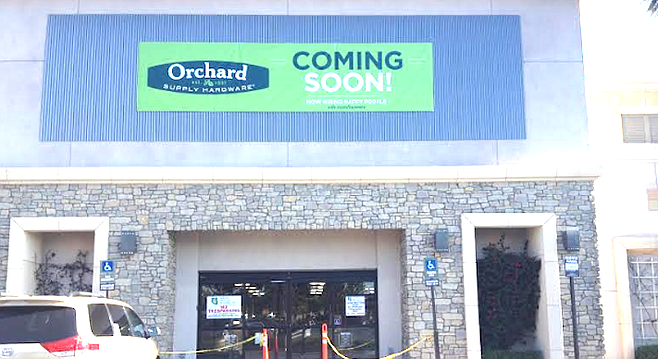 In competition with Lowe's and owned by Lowe's

San Marcos will soon be the first North County home to OSH – formally known as Orchard Supply Hardware. The 86-year-old boutique home center chain has been centered primarily in the Bay Area, with 91 locations as far south as Orange County.

Customers describe Orchard Supply Hardware as larger in square footage than a typical Ace or True Value hardware store and more upscale. For example, OSH sells Bob’s Best Cow Manure, made from Point Reyes, CA dairy farm compost. But the stores are not as overwhelming as the big-box Lowe’s or Home Depot. The county’s first OSH opened in La Mesa in December of last year.

To be located in the former Sports Chalet building at the Grand Plaza shopping center on Las Posas Road, the 40,000-square-foot store is expected to open around June 29, said an on-site construction supervisor.

Started in 1931 in the San Jose area, the chain was originally a co-op formed by depression-era farmers to help save money on feed, seeds, and supplies. After several owners floundered with the onslaught of competition from big box home improvement centers, Sears purchased the chain in 1996.

What most Orchard Supply Hardware customers may not know is that Lowe’s now owns the chain. However branded gardening tools, building supplies, etc., only carry the OSH label. In a 2013 Chapter 13 reorganization by Sears/Kmart, Lowe’s was able to pick up the entire chain in bankruptcy court, and as been operating it as a separate subsidiary.

Beside the San Diego area, OSH is expanding into Oregon and Florida – the southeast coast being the corporate home of Lowe’s.

In 2015, it was San Marcos that welcomed other retail firsts – San Diego County’s first Hobby Lobby and WinCo Foods locations that coincidently occupied the space in the Creekside Marketplace center that was vacated by Lowe’s in 2014.

Gee whiz! Lowe's gives up on San Marcos about three years ago, and is now baaaack with another operation. These retailers really make a person wonder about their management. OSH was one of those later acquisitions by Sears, one that it never should have made. While its own retail, mall-oriented stores were struggling (actually they were and are failing), Sears was buying up such things as OSH and Lands End. But at the same time, Sears was selling off its successful financial services operations to raise cash.

OSH is one of few of the home center chains in the 60's model that survives. Hechinger, Angels/HandyDan, the many Cooper operations, San Diego's own Handyman, and Ernst Malmo, all are but a memory. Home Depot drove them all out of business or BK.

It will be most interesting to see just what OSH offers, and if I'll bother to go there more than once or twice. I sure could use something closer and more convenient than Lowe's or Home Depot.

And Sherwin-Williams bought out Frazee Paint sometime back.

Ponzi, In the early 70's, Weyerhaeuser bought Dixieline from the Cowling family. Then, maybe fifteen years later, that fprest products corporation wanted to exit the retail business, and sold it back to a Cowling. (In the interim, he had been running it for Weyerhaeuser.) That sort of thing seldom happens nowadays. That Cowling passed away a few years ago, and what since happened to its ownership I don't know about. But, at least, Dixieline seems to prosper, deliver great customer service, and is one of the few old-time local retailers that is still around.

I have shopped there for years. They have better customer service than Home Depot by far. They are great for window, doors and remodeling projects. I guess the industry is consolidating to remain competitive against the Orange Monster.

You are remarkably well-informed. I'd not have guessed that there had been any sort of corporate Monopoly gaming behind Dixieline. It is one of the largest, or largest overall, lumber suppliers in the county, meaning that their retail operations are only one facet of the larger enterprise. I suspect that the wholesale part of the business generates massive sales volumes while the retail part complements that with the showrooms of products and contractor service.

If I were a contractor, I'd much prefer to deal with Dixieline rather than HD, unless the price disparity was huge. The service level at Dixieline just blows past anything the big box warehouse operators can or do offer.

I think you're correct about their contractor business representing much more revenue than retail. They have a legacy with so many local builders, they extend credit, work within the construction loan apparatus. Home Depot only does retail financing and does not get to offer many lines because vendors don't want to have their products look cheap. I don't mind paying more at Dixeline because it's easier to shop and they give a senior citizen discount. The only thing I have found that HD does better is in the paint department.

They built a new OSH in San Carlos. I went there and it was nice but the prices were higher than Home Depot and Lowes. I found no reason to shop there as a HD is a few blocks east in El Cajon.

Hillcrest Ace Hardware on University Avenue has not only managed to survive against the big box guys, but it's doing just fine. They get 4.5 stars on Yelp. It recently moved into a larger space next door (where a furniture store used to be).