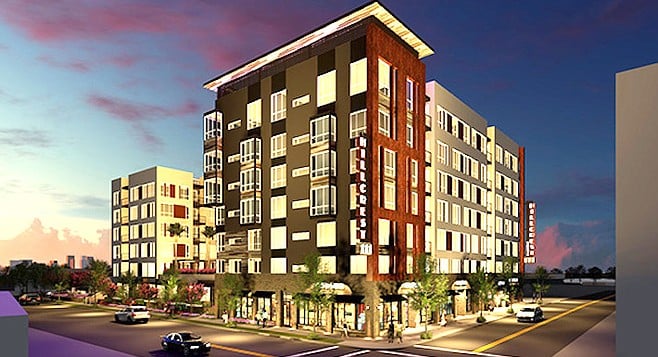 Second thoughts about Hillcrest 111 at Seventh and Robinson

A deeply divided Uptown Planners voted 9-5 to appeal its approval of an 111-unit, 92-foot tall project at Seventh and Robinson if the developers fail to incorporate the group's suggestions in the building design. 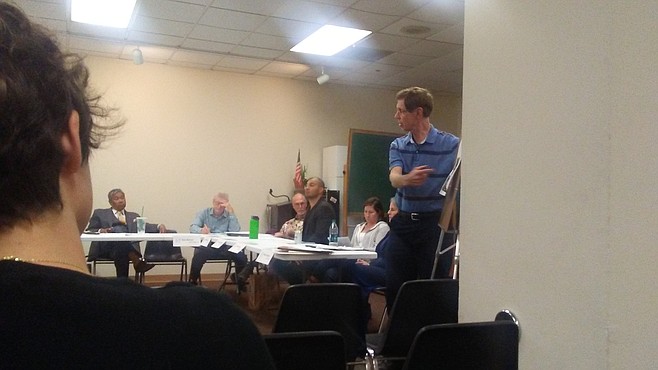 Tom Mullaney at presentation: "I want this decided at a public hearing."

The group had asked for a setback and step-back from Robinson, for developers to install solar energy and for additional parking for visitors. "There's a lot of built-up angst in this community and you're seeing it," said group member Michael Brennan, who voted against the appeal. "This is almost a stick in their eye..... This will accomplish nothing but delay the project and the housing we need."

But angry neighbors of the project, who say they didn't find out about the nine-story building coming to their two-story neighborhood until recently, applauded the vote to appeal. "People are outraged over this inappropriate development in our neighborhood," said neighbor Ann Garwood. "We raised $15,000 in two hours (to look at legal action against the project). That's a pretty strong message."

The project, called Hillcrest 111, makes use of development incentives that allow bigger projects and less parking in exchange for affordable housing. It will include nine units specifically for very low income people, according to Jim Ivory of Greystar, a nationwide property development and management company that is developing Hillcrest 111.

Ivory pointed out that, though the project is allowed to provide less parking because of its affordable housing and other elements, it includes 190 spaces. The planners' design review committee had approved the project.

The goal of the appeal is to get the developer to pull the building face back from the sidewalk and to have it 'step-back,' which means cutting space off each floor as the building climbs so it looks like stairs, softening the front face.

"It's going to go straight up 92 feet from the sidewalk," said Tom Mullaney, who presented the appeal to the group. "I want this decided at a public hearing."

Greystar looked at the group's suggestions but found they couldn't make them work, Ivory said. The setbacks and step-backs would cut the building capacity so that they'd have to eliminate the planned affordable housing, he said.

And the company has already created more parking spaces than the city requires. The solar installation is still under consideration, he said.

The vote means the group has 12 days to file an appeal — its only chance to appeal the project. A man in the audience chided the group over its vote. "Sometimes this group forgets it is an advisory group," he said. "They're not ignoring you, they think you are wrong."

What the author of this article conveniently neglects to mention, is the 70+ foot AT&T building right across the street. Or the twin 14 story towers three blocks south. This building is not out of character in the community. The rampant NIMBY-ism from Tom and the loud minority in Hillcrest are keeping working class San Diegans out in order to further segregate the haves and have nots. Sad. Thankfully, their role is only ADVISORY, and the affordable housing ordinance should protect this project from major delay.

Thinkered - The AT&T building is the biggest eyesore and blight in Hillcrest. Just because we made a mistake back in the 70's doesn't mean we should make more mistakes.

No, Pernicano's is the worst. AT&T is a close second; at least they maintain their building.

Once again, thinkered is blinkered by his bias for his developer sponsors, who are the real culprits keeping working class San Diegans homeless by only building overpriced and oversized crap like this for outside investors. But sticking with the actual article the author wrote:

1) This project is out of scale for the neigborhood, and one-third higher than the adjacent face of the AT&T building—as this diagram from Atlantis Group's own proposal proves, http://www.sandiegoreader.com/users/p...

2) This project will choke off one of the only two east-west arteries in Hillcrest with a pedestrian-hostile design. Robinson Avenue here is less than 30' wide, with only 8' total of sidewalk and right-of-way on the south side. Not having either the building setback from the property line or stepbacks on the upper floors will force anyone walking this block into high wind gusts and trashy exhaust in the best of weather; and between a 92' waterfall and filthy splashes from traffic when it rains. This is also a violation of the Urban Design element of the new Uptown Community Plan, http://www.sandiegoreader.com/users/p...

But since the Planning Commission is packed with appointees from the development industry and not representatives of society as a whole, this story shows that even when a community planning group is not wrong they're ignored.

Cassander, I do not work in real estate nor development, but your assumption only shows your blind ignorance to what has escalated into a wide spread public housing crisis. Teachers, firefighters, policemen, waiters, veterans, and nearly every demographic is suffering from the obstructionism of community planning groups. CPG's throw up blockades to keep "others" (low income folks, minorities) out under the guise of "community character." It is thinly veiled racism and classism, which you are contributing to, Cassander.

Thank you, Cassander, for your words of wisdom and truth about developers who build "overpriced and oversized crap ... for outside investors." San Diego community planning groups, themselves full of insiders, are ignored and going the way of the passenger pigeon.

They going the way of the passenger pigeon because they're mostly made up of wealthy white seniors, and time doesn't stop for anyone, no matter the socio-economic privilege. Thankfully a new generation of community leaders will diversify and adopt more sustainable planning methods for better social, economic, and environmental justice.

Really, thinkered? This is a new one: the hoi polloi are being victimized by community planning groups? You may not work in real estate or development, but you are trafficking in tunnel-vision nonsense.

Regrettably, some community planning groups are dominated by realtors, architects and developers and the City Planning Commission is their tool. But your "new generation" thinks the word "sustainable" means gig-economy ideas like 24/7/12-months-a-year neighborhood-killers like vacation-rental-by-owner to pay for expensive mortgages or unsightly remodels. Or ending hard-won coastal height limits. Or enabling extreme densification in established areas. No interest there in communal consensus. As for your diversifying young turks, "property rights" seem to be just as sacred as for any "racist, classist wealthy white senior."

The shill doth protest too much. Thinkered says he does "not work in real estate nor development," but he only comments on land use issues and always but always parrots a pro-developer line. That's a fine parsing of words that doesn't deny he is a beneficiary of the development industry in some other way, such as a planner with SANDAG or other government agency—or even management at KPBS.

Personally, I would wager thinkered is affiliated with one of San Diego's many pro-developer front groups, each ostensibly about environmental and social issues, but all significantly funded by developers. See here, here, here, here, here, here, and here. These private nonprofits provide astroturf for this new offensive against community self-determination by way of the green agenda, specifically targeting community planning groups.

But how you say? Well, if we have "multimodal infrastructure," that is, streets with unused bike lanes, half-empty buses, and restricted vehicle mobility, then developers can claim density bonuses that allow them to not provide parking yet still charge market rates, pocketing the difference.

And once the argument that people who are opposed to density are just selfish individuals falls apart, as people realize density increases land value for developers, then thinkered and his fellow running dogs switch up and accuse the preyed-upon communities of "thinly veiled racism and classism."

Once you know how to look, you start seeing the same lack of imagination and out-of-proportion viciousness in their anti-democratic comments. At bottom, every one of the pro-developer arguments is that no neighborhood (except the tony precincts where the developers themselves reside) should have any right or input into how they are allowed to grow.

If you're not getting some kind of grift out of it, thinkered, you're not very convincing otherwise.

Haha! Paranoia much? Do you make a new aluminum foil hat everyday, or just reuse the same one? I wish I had gotten into development, but sadly I pursued a career in education (where I get to indoctrinate young minds with my crazy egalitarian ideals). Have fun at the next Roswell convention...

A brilliant reveal here. Thank you again, Cassander. I looked up the seven "here" links and the one about "targeting community planning groups." The density push is a disaster and the bullshit about "racism and classism" is unmasked. Running dogs indeed.

This isn't a second thought Marty...this was a vote to appeal two already approved motions voted affirmative on Feb. 7, IF the developer did not agree to them. The fact that some board members were apologizing to 111 for the reasonable changes requested on a 9 story building (STEP BACKS, SETBACKS), was just amazing and, in my opinion, unprofessional...if this elected community group outlines improvements needed and won't stand behind them with an appeal, what good is the group? Happy to see the 9-5 vote in favor of the appeal, standing by their previous vote...funny to watch the board slobbering all over a 3 story Little Italy hotel plan on India (reported separately in SDR)...BTW great job working with the neighborhood on that project Mr. Developer, wish you worked for Gateway or 111, you were excellent at the meeting and what things should be like between developers and neighborhoods, unlike the divisiveness in Hillcrest and the politicizing of the situation like that quote of Brennan in your article. On 111, some of the same board members so happy with India Street appear to care less about a 9 story building, no setback, no step backs, (standard modern city planning requirements for sun, air and quality of life)...what a double standard...why not write about that SDR...happy 9 board members had the integrity to stand behind the original vote...UP's should have an offsite and review their mission...