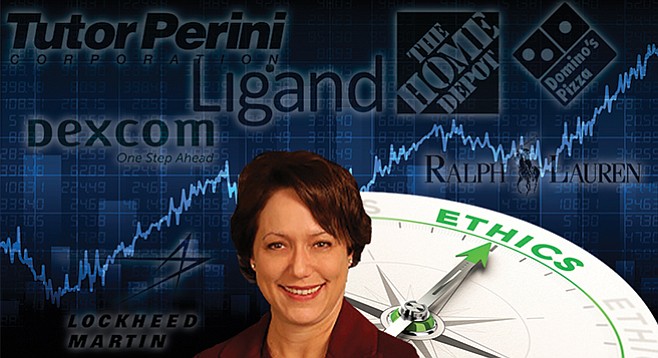 The holdings of top ethics officials

As the city’s ethics commission slumbers during the reign of San Diego mayor Kevin Faulconer, executive director Stacey Fulhorst has been buying and selling lots of securities, according to her personal financial disclosure report for 2016.

Per Fulhorst’s March 28 filing, the ethics honcho purchased between $10,000 and $100,000 worth of biotech Allergan’s stock last June 16 and dumped it two months later, on August 25. She acquired between $2000 and $10,000 in drug distributor AmerisourceBergen Corp. on April 29, selling it August 25. Fulhorst’s other short-term positions valued between $10,000 and $100,000 included Ligand Pharmaceuticals; Domino’s Pizza; Home Depot; Lockhead [sic] Martin; Ralph Lauren; Tutor Perini; and Dexcom, a local biotech. Additional short-term holdings last year, reported by Fulhorst to be worth between $2000 and $10,000, were software vendor Ellie Mae and HD Supply. In addition, the document shows that on March 30 of last year Fulhorst acquired between $10,000 and $100,000 worth of Apple stock, as well as the same value range of the Walt Disney Company on May 11.

On the local front, Fulhorst bought and held between $2000 and $10,000 worth of Qualcomm on July 12. She purchased and held similar dollar amounts of Valeant Pharma (January 6); Visa (June 24); Emerson Electric (June 28); Hewlett-Packard (October 7); and Walmart (January 7). Meanwhile, according to the disclosure, an outfit called Corporate Recovery Associates, LLC, listing Fulhorst’s spouse Richard Feferman as managing member, was said to be worth more than $1 million. Its website says the firm is “a leading national consulting firm to creditors’ committees that need to maximize the recovery of claims in Chapter 11 Bankruptcy matters.”

The holdings of top ethics officials here have raised questions among those watching the watchdogs. Walmart is a registered city lobbyist and a major money political giver that previously has faced a commission audit. Qualcomm, which frequently lobbies city officials and provides campaign cash to mayoral and city council candidates, was the target of a 2013 suit filed by New York state comptroller Thomas P. DiNapoli alleging that “despite requests for increased transparency, Qualcomm continues to obscure its political spending.”

Last March Qualcomm executives contributed thousands of dollars both before and after a secret meeting between company founder and billionaire Democrat Irwin Jacobs and GOP mayor Kevin Faulconer regarding a controversial Balboa Park road and parking plan by Jacobs, which the Republican subsequently endorsed. Ethics complaints are not aired in public unless the commission votes to impose sanctions, and Fulhorst no longer provides formal advice letters, reserving her opinions for email and telephone talks that don’t provide a public paper trail.

Tutor Perini built the San Diego Convention Center. Will they bid on the planned expansion?

This story raises a lot of San Diego-type questions.

What's the take-home for our "Ethics Commission" executive director Stacey Fulhorst? If she has to memorialize her opinions on paper only if "sanctions" are imposed -- and hey, how often does THAT happen -- I would hope the taxpayers are saving some money here.

Could Fulhorst be playing the stock market on her computer at work, like other people play games or surf the shopping network? Those rapid stock turnovers are thought to be ill-advised for ordinary mortals. And since she doesn't have to put anything official in writing, she may have a lot of free time at the office.

And finally, aren't those investments in local companies considered a conflict if interest?

*Does not show retirement benefits. And her pay is likely higher in 2017.

Well done, dwbat. Thank you. No word on the conflicts of interest? I did look up present and past ethics commissioners, aka flunkies, who are appointed by the Mayor and City Council. I assume these guys are not paid. Please tell me they work pro bono.