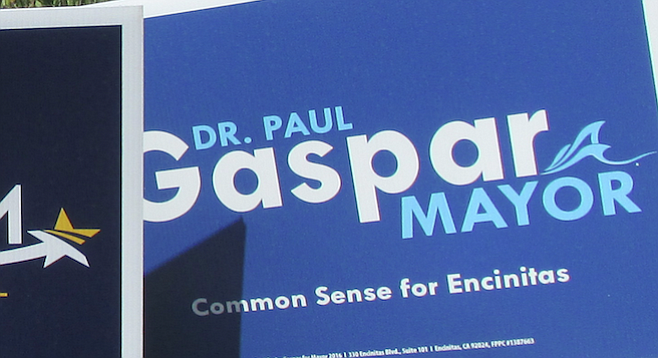 Paul Gaspar is not a medical doctor

Some Encinitas residents are accusing mayoral candidate Paul Gaspar of misleading voters by using the "Dr." title without attaching the appropriate suffix in campaign brochures and on his website.

Also on his website are pictures of Gaspar posing in a lab coat as well as one of him holding a stethoscope near a patient's chest. Gaspar holds a doctorate in physical therapy but is not considered a medical doctor. 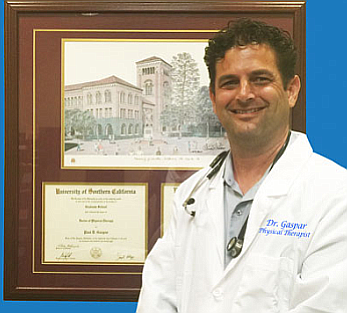 "He even poses in [medical] doctor’s attire in some of his photos...."

"In his mayoral campaign, [Gaspar] uses the singular term 'Dr.' in all of his literature and every time he addresses an audience," says Encinitas resident Dennis Lees. "He even poses in [medical] doctor’s attire in some of his photos rather than customary DPT attire."

Gaspar's wife Kristin served as city councilmember and mayor of Encinitas and is currently running for county supervisor against incumbent Dave Roberts.

Paul Gaspar has been active in his wife's political career. In 2012 he was criticized for his involvement in issuing a series of political mailers under the "We Love Encinitas" moniker. The mailers claimed the group was a registered nonprofit; however, as reported by the Coast News Group in 2012, no such nonprofit was ever registered with the state.

In July 2016, Paul Gaspar filed paperwork announcing his run for mayor of Encinitas against councilmember Catherine Blakespear. Now, residents are beginning to take issue with Gaspar's use of "Dr."

"Gaspar obtained a doctorate in physical therapy so he is justified in using the title 'Dr.' as long as he appends 'DPT' to clarify that he is a doctor of physical therapy, not a physician or surgeon. To do otherwise not only exaggerates and inflates his qualifications, but also violates Codes 2054(a) and 2633 (b)2 in the California Business and Professions Code. These state that it's a misdemeanor to just refer to himself as a 'Dr.' without adding the required suffix," says Lees.

Gaspar did not respond to a request for comment.

In regard to election law, says Richard Hasen, a professor of law at the University of California at Irvine, little can be done to prevent such claims.

"There are often fights about the work designations people put in their official ballot designations. But the First Amendment makes it hard to do anything about misleading or false campaign advertising unless it defames someone," Hasen says.

"When the Supreme Court dealt with a question somewhat related to this a few years ago, it said the best remedy is 'counterspeech' — that is, someone responding by saying the advertising is false or misleading."

It's very misleading. If lawyers (who have a Juris Doctor degree) started calling themselves "Dr." we'd have a ton of doctors in the county.

This is an excerpt from PT In Motion News:

Perhaps the APTA should be notified of his deviation from their guidelines.

Ahhh...guidelines. Sadly they are just a recommendation, a suggestion, an example to be followed. Unfortunately they, guidelines, are not enforceable. So he's got plenty of wiggle room just like every other politician we all know. He learns fast!

Like lots of people in the 1960s, I became a Doctor of Divinity and a minister at Missionaries of the New Truth ($10). They didn't give me a lab coat saying "Dr.", but I suppose I could get one and run for office. While the Truth has aged some since then, I have only grown more presidential looking. Waddya think?

I think you should start form The First Church of the Whats' Happening Now. I will sign up as your first member as long as you bestow an appropriate title on me.

So, does this mean people are more likely to vote for a doctor? Perhaps he's a fan of Dr. Laura who does radio therapy with a Ph.D. in physiology. And Dr. Seuss, what's that all about?

I'd go with Dr. Suess as he, if he were alive, would make a good politician.

Another radio "doctor" in LA is an unlicensed sex therapist who hangs out with a bizarre assortment of nutjobs. She has NO training, but claims a Ph.D. in Philosophy (from an unaccredited university, of course). Beware of these quacks and sleazy entertainers.

Dr. Phil is not a medical doctor, either. He has a Ph.D. in psychology.

Whatever, he married a goose. 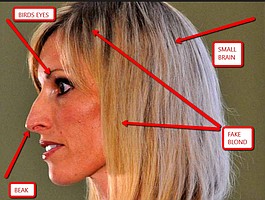 At least he has a "sorta" doctorate. Not too long ago, we had a dude on the Tri-City Hospital District board who claimed a doctorate and used the honorific to help get elected to that dysfunctional board. Some opponents of his started digging and could find nothing about the university he claimed had granted the degree. When he was asked about providing evidence he had none, just a lame excuse for having lost all of it. It was a piece of total fabrication. Now there's a mini-scandal in the San Diego City Schools about a principal who claims a doctorate that neither he nor the district can validate. This kind of stuff goes on all the time, and is likely to get worse in coming years.

It's easy to contact a college or university to verify a degree. So why isn't it done more often by boards and/or HR employees?

My familiarity with how employers vet applicants, and especially their academic claims, is about non-existent. I'd think that most do check such things. The problems arise when an existing employee claims to have been pursuing a degree and has then had it granted. In governmental employment, that often means more money, and also opens doors to higher-level jobs that also pay 'way more. At that point a phony certificate or fabricated transcript can do wonders.

But the real danger is that charlatans can just appear, claim high-level educations and/or professional status, and run for office. How do the voters check the validity of the claims? Well, a free press and skeptical reporters can do wonders.

I must point out that it is very difficult to contact a university that doesn't exist!

Anyone (who will pay) can get a degree or enrollment verified at National Student Clearinghouse.

I'm surprised the ultra-crooked Trump "University" didn't try to offer doctorates. They could have swindled ever more students than they did. A Doctor of Trumpology title might appeal to some idiots.