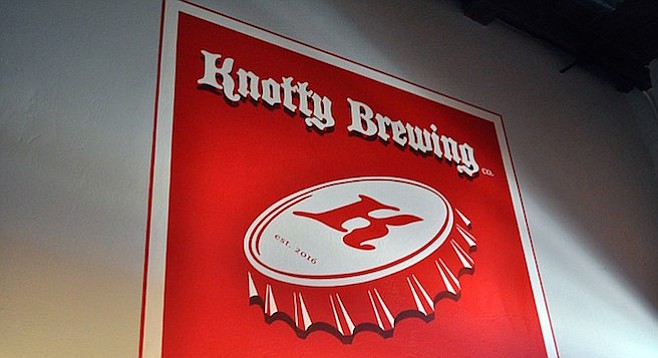 The growing East Village beer scene gains another micro with the official opening of Knotty Brewing Co. on September 15.

Knotty's small tasting room and five-barrel brewhouse are part of an overall expansion of the Knotty Barrel gastropub, which also added both a sports lounge and an outdoor bar. Similar to Resident Brewing, which recently grew out of Gaslamp restaurant The Local, Knotty's brewing team may be seen at work through a window inside the restaurant.

That brew team consists of Donovan Lane, a Maine transplant who spent the last four years making beer at Funky Bow Beer Company in Lyman, Maine, a little ways south of Portland. Lane has a chemistry degree and takes a studied approach to brewing, seeking out specific yeasts and grains in pursuit of traditional flavor profiles styles that aren’t necessarily hop forward.

"We interviewed quite a few brewers in San Diego, but they all wanted to brew IPAs," says Knotty owner Kenneth Lovi, who prefers English, Belgian, and German profiles. "One of the things we really like about Donovan is he brews classic styles."

The first Knotty Brewing beers were tapped at Knotty Barrel in early September, composed of an English pale ale, English stout, blonde ale, and a Belgian wit with orange rind. These four core beers will remain on tap in the restaurant, but Lane's other beers will almost exclusively be served in the tiny dedicated tasting room next door to the restaurant, accessed from Market Street.

"We're not looking at distributing to a thousand places," Lovi says, "we have a hit list of ten accounts, and that's all we will do." Mostly, he's looking at places where craft beer enthusiasts go looking to try interesting, less ubiquitous styles.

That's what will be online when the tasting room opens. It will feature a Belgian table beer, a marzen-like brew made in honor of Oktoberfest, and a Belgian dark ale that may stand as the hoppiest item on the menu. Hopheads shouldn't despair though — there will be some IPA in Knotty's future. "Eventually we'll do something," Lane pledges, "but it won't be all the time, it will be rotational."

With Lane manning the small operation, Lovi's hope is that customers will interact with him and learn about the beers they taste, keeping an intimate vibe to the business. Lovi doesn't intend to grow a production brewery, here, just build on the neighborhood bar ethos he's tried to establish with the Knotty brand. "It doesn't serve us any purpose to race up there and try to be the next great big beer," he says, "If it grows, great! We'll do another Knotty Barrel and Knotty Brewing. Outside of that, I'm very comfortable keeping it small and just making great beer."