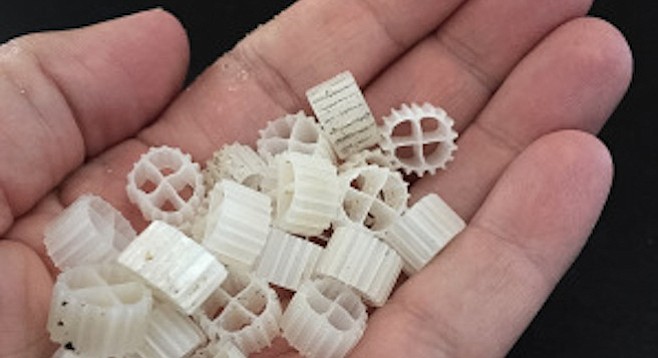 The curiosity of a North County artist and beachcomber recently resulted in a slap on the wrist for SeaWorld, San Diego Coastkeeper is reporting.

Janis Selby Jones has long walked the beaches of North County, collecting debris that washes up on shore and using it in her art projects. Over the past few years, she says, peculiar small plastic sprockets have been turning up with increasing frequency.

"I assumed the nearby sewage treatment plant was the culprit," Jones wrote in a recent blog post. "I called the plant to report what I was finding and spoke to an engineer who assured me that they do not use that type of biofilter. I was glad that they weren’t the source but felt frustrated that I didn’t have an answer."

She then contacted Coastkeeper on the advice of friends online. The group was able to track the plastic filters — of which Jones found as many as two dozen in a single day walking the beach — to a Hubbs-SeaWorld aquaculture facility in Carlsbad's Agua Hedionda Lagoon, where the research arm of the theme-park chain has a seabass hatchery.

After the San Diego Regional Water Quality Control Board was contacted, inspectors visited the site and directed the facility to take measures to control its unintended dumping of plastic into the ocean.

"I am thrilled that this source of plastic pollution will be stopped and am gratified to know that my persistence led to a positive outcome," writes Jones. "I expect to find fewer and fewer biofilters over time, but I will continue to clean the beach as often as I can because many more mysteries will be washing up."