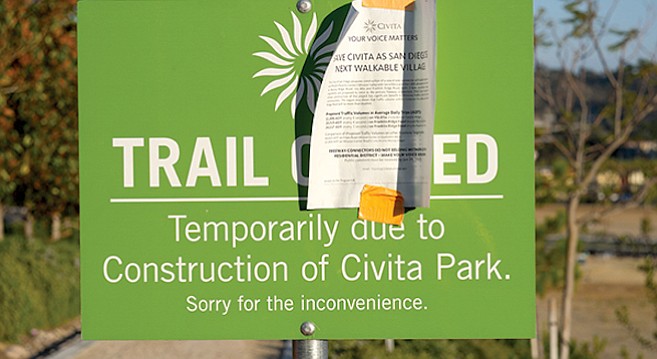 Your October 20 issue really was perfect. You exposed the growing prices of homes in San Diego and how the average American wage earner can’t keep up or even contemplate purchasing a home. This is probably due to how American industries are sending American jobs overseas and leaving American citizens to live a life with lower expectations.

But what an endorsement for Donald Trump. This is what he’s been trying to tell Americans for over a year. The new socialist Democratic party that endorses globalization is in the process of moving the American standard of living down to what it is in places like India, China, Syria and Libya. 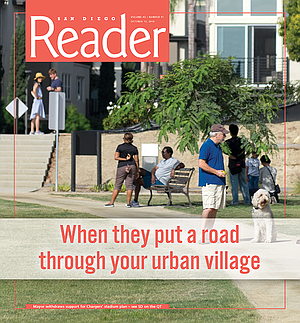 Don’t tread on us

Thanks, Reader, for Dorian Hargrove’s informative story about Civita Mission Valley’s newest and brightest residential development. Those who live in Civita bought into the vision the Grant family and Tom Sudberry (of Sudberry Properties) have for their creation. We’ve not only invested with our pocketbooks but, mor importantly, with our hearts.

I, personally, moved from Carmel Valley, where I lived for 28 years, in order to be a part of this wonderful, progressive, walkable community and, so far, I love it!

Without question, the Grants and Sudberrys are creating something very special here and have not missed a step — with one glaring exception. As the article so accurately pointed out, there is a potential fatal flaw and that is the impact of a proposed road that will connect directly to I-805 and channel traffic, nonstop, right through the heart of our residential community. And, because of that concern, virtually every Civita owner supports our community’s grass-roots movement, Save Civita.

If a connector road were to be approved, Civita would morph into something beyond its original vision. Instead of a perfectly walkable, livable, sustainable, contiguous community of neighbors, a freeway connector road would split Civita into three separate parts divided by two roadway barriers that would funnel traffic, noise, pollution, and safety hazards up and down the narrow, residential streets of Via Alta and Franklin Ridge Road. And it will become even worse once a school is built on the corner of Via Alta and Civita Blvd.

Circumstances and conditions have changed drastically since the original concept of a connector road was born in 1985 when what is now Civita was nothing more than a barren, rock quarry. What may have seemed like a reasonable plan 30 years ago will now, if put into place, actually harm a new community and place laudable development goals at risk decades later. In fact, in 2004, Mr. Sudberry requested the City Council overturn the City Planning Commission’s decision to support a connector road. After the request was denied, the company said it would remain “neutral” going forward. But ten years later, Civita is in a position where it could become a shining star of planning.

While I can respect Sudberry’s intent to remain neutral, though not on the merits of the issue, recent comments to the Reader by the Civita project manager, Marco Sessa (who, to this point, has done an admirable job moving Civita forward), would seem to indicate neutrality has given way to tacit support, particularly when he states the road would not destroy the community, a contention with which we strongly disagree.

If Sudberry Properties did not think the infusion of a freeway connector road directly into the heart of Civita would be detrimental, why didn’t their marketing map depict that potential connection? Instead, it showed (and still shows) a dead-end, a cul-de-sac, at the top of Via Alta and Franklin Ridge. And there is also no indication on that map of a possible road leading up to Phyllis Place. We assume both were left out because their inclusion would raise red flags and negatively affect home sales in the community. And their marketing would have to reflect the negative impact road traffic would have on an otherwise well-planned community.

Mr. Sessa also says he has heard from other Civita residents who support the road. Perhaps he has, but the Save Civita organization has seen virtually no support. To this point, the grass roots campaign has polled over 80% of the Civita residents and a whopping 95% (out of 376 households polled) expressed strong opposition to the road, and have written letters to the city’s planning department stating so. The remaining five percent declined to answer, were unsure, or loosely supported it giving the reason that it would be convenient for them and possibly save a few minutes on their commute (however, studies show the traffic on backup ramp to get onto I-805 be much longer and, therefore, it will actually take more time to access the freeway than it currently does).

The decision to approve or deny the road will ultimately lie with the City Council, and they will be pressed on this issue by Civita owners/residents when the time is right — but the Sudberry company has the ears of the San Diego City Council right now, including our representative councilmember Scott Sherman’s, so remaining neutral on such an important community topic is a disservice to all who live in Civita.

Instead of what is being planned and marketed, a connector road will allow Civita to become nothing more than a pass-through community which shows up on every driver’s GPS device as they search for the shortest and/or fastest way between Mission Valley East and I-805. Those drivers don’t care about the impact they have on local neighborhoods; they are concerned only with how their GPS can get them from point A to point B as quickly as possible. Even traffic planners and engineers acknowledge they are struggling with how to accurately measure and predict increases in traffic and the subsequent impact to communities from the use of this ubiquitous new “hurry up” technology. Please consider the effect traffic has had on Texas Street, Mission Village Road, and Murray Ridge Road.

For the Grant family and for Sudberry, Civita still can still be a wonderful legacy project, one they can look at years and decades out and be able to proudly say, “We created something unique, something special, something lasting.” But to remain “neutral” on the road is tantamount to harming the very

community it has been working so diligently to create. Therefore, we ask Sudberry to re-assess its position based on the changed conditions, and finally stand with all those who have bought into their vision and take a stance publicly that a connector road will do much more harm than good for our, and their, community.

More on This Subject

Thanks so much for the article on the Franklin Ridge Road/Mission Valley and Civita area. Would like to see more articles on this subject.

A Matt Potter News Ticker item indicates Qualcomm executive Irwin Jacobs’ financial and vocal objection to moving the stadium location to downtown. Could it be he really doesn’t want to lose the daily high visibility of the Qualcomm name as commuters travel the busy corridor of I-8 and I-15?

Mission Valley's "Civita", formally known as "Quarry Falls" is a pocket neighborhood. It was one of the first projects to get people out of their cars and feel safe for their families to walk or bike to the local future school, the new public park open to all communities and the local shopping. And designed for locals to be able to walk to your job in the future business park. So we have a chance to implement what was planned and approved by the City Planners and the Developer. This was designed and embraced to stop the "Sprawl."

So, now the S.D. Planning Dept. is revisiting an old outdated Environmental Impact Report "EIR" for a "Road Connector" to the northern Serra Mesa neighborhood. This would be absolutely asinine! First of all it will bring in "Grid-Lock" as the planned connector road of 4-5 lanes will reduced into just 2 lanes. Actually it will be just one single lane in each direction entering or leaving Civita into or entering from Serra Mesa. These two streets Via Alta and Franklin Ridge Rd. are now connected as a throughway. We have on Via Alta 3 fully developed homeowner projects now, with 3 more to be completed along with a school for 600 students at the base of the hill. These residents will have to navigate opposing traffic and with a densely planted median that blocks visibility from oncoming traffic. There are no stop signs at these 8 openings, and no plans to mitigate the now speeding cars just traveling to and from home. This is a disaster waiting to happen! If there were to be a stalled vehicle or collision with a pedestrian, or opposing vehicle crossing this main roadway, the flow traffic will come to standstill. You will not be able to pass and emergency assistance would be hindered.
Also, Homes are as near as 28 feet this roadway. Are there General funds for a new Environmental Impact report?

Some with North Park Planning Commission believe our traffic imposes on their already crowded Texas Street - Qualcomm Way connector. I would partially disagree. Mostly Civita Residents access the 805 via Mission Center Rd. Civita is not the key to lessen the woes of traffic on Texas St. if the "Serra Mesa Connector" is approved. Commuters will eventually (with GPS) discover that with a backup southbound "805" at rush hour, might be force more traffic across the valley into North Park via Texas St. The traffic you see on Texas/Qualcomm Way is not even generated by Civita now. Most traffic is coming from the other feeders business roads like Camino Del Rio South/ and North, etc.

If the vision of design is future forward, let's try to make this a model walkable and sustainable community. Please make an informed decision by visiting our community first and driving the road to the new dog park at Apex on Via Alta and view where the new connector road is planned.