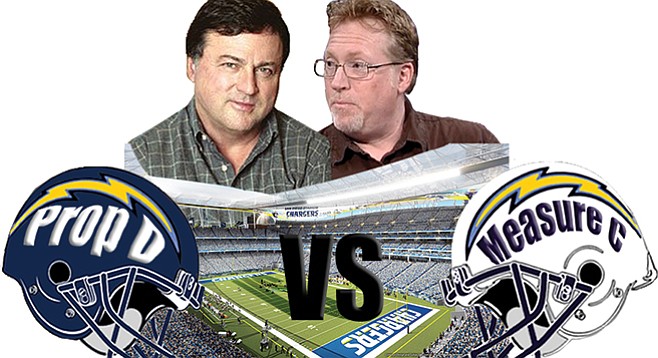 Miserly Moores and his minions

Ever since his slate of members for election to the homeowners’ association board that runs Rancho Santa Fe was defeated in a controversy-filled election this past summer, mega-millionaire ex–Padres owner John Moores has gone to ground. Perhaps most surprisingly, after lavishing nearly a million dollars on an initiative drive earlier this year that put Measure D, which would hike San Diego city hotel taxes, on November’s ballot, Moores and his minions are suddenly nowhere to be found on the municipal landscape.

Measure D was hatched by plaintiffs’ attorney Cory Briggs, who first publicly broached the idea of raising room taxes to 15.5 percent and shifting the ultimate destiny of the current Qualcomm stadium site to the advantage of Moores and his JMI development company. If passed by voters, the Moores measure would pave the way for the Qualcomm site to be set aside for park and higher education development, including a putative soccer and football stadium for San Diego State University, in which Moores would likely play a key role.

“As the Chargers work to develop a downtown San Diego football stadium, the JMI team (represented by President John Kratzer and Steve Peace), working in concert with Steve Black of Cisterra Development, another prominent San Diego developer (and SDSU alumnus), will unveil their proposal to develop the Qualcomm Stadium site into a civic gem that all SDSU alumni and San Diego County residents will claim proudly,” said an invitation to a springtime lunch promoting the project.

The political water was muddied when the Chargers decided to pursue their own ballot measure, hiking hotel taxes by 16.5 percent and giving them total control of the downtown stadium development game. That scrambled the political calculus for the complicated Moores initiative, casting a shadow of confusion over Prop D’s prospects.

But Briggs appears not entirely ready to surrender, coming up with $49,458 in cash from his law firm, along with a personal donation of $541 on October 4, according to city campaign disclosure filings. That compares to the nearly $5 million that the wealthy Spanos family of Stockton has put up for the Chargers initiative, Measure C.