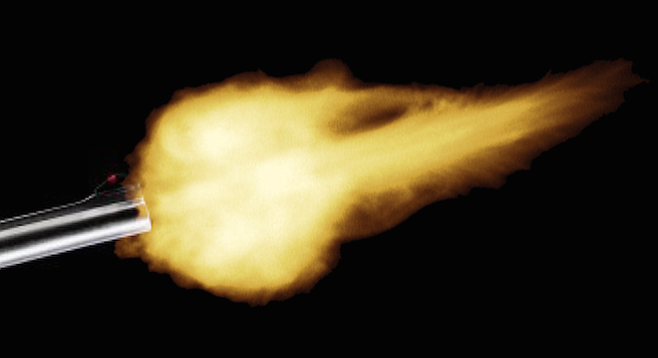 Shots fired! But where?

Acoustic sensors will give origin of gunfire to police

Acoustic sensors tuned to capture and record the sound of gunshots and report them to the police department are coming to Southeastern San Diego.

According to a September 26 public notice the city and its police force will be installing the gunshot detection system, ShotSpotter, manufactured by Northern California–based SST Incorporated, on light poles and public structures throughout Encanto, Skyline, and Paradise Hills neighborhoods.

The purpose of gunshot detection technology is to alert police departments of the location where gunshots are fired. According to SST's findings, dispatchers and patrol officers will receive notice 20 to 45 seconds from the time it detects shots fired in the area.

By using ShotSpotter, according to a media packet sent by the San Diego Police Department, officers will "arrive at the scene of a crime faster, and with an increased level of safety, and situational awareness knowing exactly where gunfire is taking place."

According to the company, four out of five gunshots are not reported to the police. The technology will help narrow that gap. Currently there are 90 cities throughout the country that have installed the acoustic recording system.

But, as reported by Reveal and the Center for Investigative Reporting in April of this year, the benefits of using the technology aren't easily detected, mostly due to the fact that shooters don't likely hang around at the scene of the crime. In fact, in San Francisco, during a two-and-a-half-year span of using the software in San Francisco, Reveal found ShotSpotter reported 3000 alerts of gunfire resulted in 2 arrests.

But there are also privacy concerns surrounding ShotSpotter. Civil liberties groups have objected to municipalities use of electronic surveillance and their lack of policies that govern the data collection.

A San Diego Police Department spokesperson did not respond to questions regarding program costs and policies for data collection.

Considering the neighborhoods that are slated to have the ShotSpotter tested in will have the cops racing all over the place and getting nowhere fast.