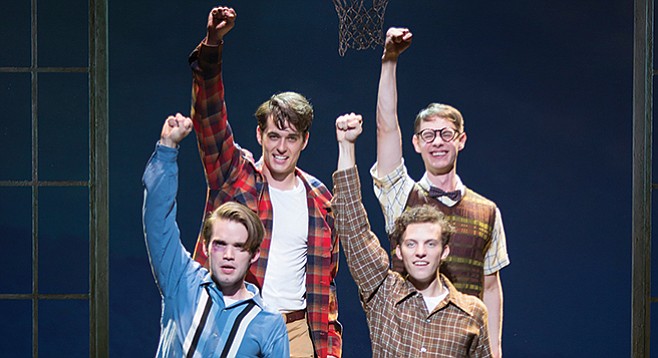 Look to the sky

If you decide to see the Old Globe’s October Sky, take your seat early. Kevin Depinet’s set has the composition and texture of a quality painting. A massive half-circle hovers over the stage. It’s what? Railroad tracks with gnarled wooden ties? The entrance to a mineshaft? Some sort of rustic arch? Or, since the musical’s about a teenager who experiments with jet propulsion, the arc of a rocket? — Thomas Pynchon’s “A screaming comes across the sky”?

Pockets of detail encourage speculation. That old wagon wheel symbolizes progress to come? Or is it the only full circle on a stage replete with half-circles (something about unfinished business or incomplete lives)? And that iron chain on high dangles over a bottomless whatever?

As the musical proceeds, the set continues to grow. An enormous wall, maybe 150 to 200 wooden planks, flies on and off, sometimes coming back slanted, like a gigantic roof. It’s either a barrier, a world on tilt, or maybe a way out. When the wall vanishes, Shawn Sagady’s projections fill the open space with restless clouds and panoramic views of the Blue Ridge Mountains, graced by a morning haze.

Though her miners could have more grit, Linda Cho’s costumes harken back to 1957, when the Russians launched Sputnik and science became a top priority in the U.S. The teens wear Converse sneakers and saddle shoes, the adults, the unassertive mufti of Coalwood, a West Virginia mining town.

The design work, including Japhy Weideman’s layered lighting and especially Markus Maurette’s fizzling rockets, brims with imaginative possibilities. But nothing in Brian Hill and Aaron Thielen’s book, or Michael Mahler’s music, has that knack. October Sky is a formulaic, predictable musical that uses every manipulative trick in the book to snare approval. This isn’t a case of the Emperor being naked. The outward trappings grab the eye. There’s just no Emperor.

The musical is based on the 1999 movie October Sky and on Homer H. Hickam, Jr’s October Sky: A Non-Fiction Memoir (Sputnik took off October 4). It’s a real-life Horatio Alger tale of a young man with a locked-in future. After he graduates from Big Creek High, “Sonny” Hickam will join his father, a superintendent, in the mines for life. But that Russian gizmo in the cosmos inspires Sonny to study rocketry against the wishes of his father and the anti-intelligence bias of most classmates.

Nonetheless, he and three other teens found the Big Creek Missile Agency. Like the Wright brothers trying to solve the “lift equation” 54 years earlier, they experiment and fail, and fail, and then succeed when a rocket rises from “Cape Coalwood.” They win the National Science Fair gold medal and nearsighted Sonny earns a scholarship.

The story — a sermon on stick-to-itiveness — inspires. The musical, however, is relentlessly inspirational.

It begins with back-to-back choral anthems: “To the Mine” sets a rousing tone, and “Never Getting Out Alive,” another. Combined, the two create such emotional overload that whatever follows better beware. But instead of a step back — let the audience settle in, the show to breathe — the third song, “Look to the Stars,” is yet another sky-vaulter. Homer (“Sonny”) vows to transcend his fate. He sings of dreams and raises a pumped-up fist in heroic defiance of convention.

Almost every song that follows roars in the epic mode. The musical starts where most end and never comes back down. And dreams, in spite of apparent barriers, conquer all. In fact, October Sky must break the all-time record for repeating the word “dream” in a musical — possibly in any two.

Also the Guinness Book for most high notes — it climbs every mountain — which some in the cast had trouble hitting. And motivational fist-pumps. A few at the right time could renew the spirit. But whenever the four lads sing together, or Homer (Lyle Selig) sings on his own, fists rise, with uplift overkill.

Stella Adler told her acting students, “The play is not in the words. It’s behind the words.” October Sky is all surface with nary a nuance. The characters are generic: stern father, long-suffering mother (Kerry O’Malley, who sings the only grounded tunes), sweet high school sweetheart, butch jocks, and doofus nerds.

Homer was nearsighted. Not so here — too complicated? There’s even a glitch in the father/son relationship. John (Ron Bohmer, the book’s punching bag) orders Homer never to touch another rocket. A few scenes later, Homer’s back at the launch pad. When John hears the news, instead of going, well, ballistic, he grumbles and sidles off stage. Time for the big finale, not a genuine confrontation.

In effect, the creators turned a courageous true story into a tidy fable for Saturday-morning TV. Not only does Homer soar, Wall Street saves his family from life at Coalwood. It’s like watching the Von Trapp family flee Nazi Germany at the end of Sound of Music. Fist-pumps for them! But what about everyone else?