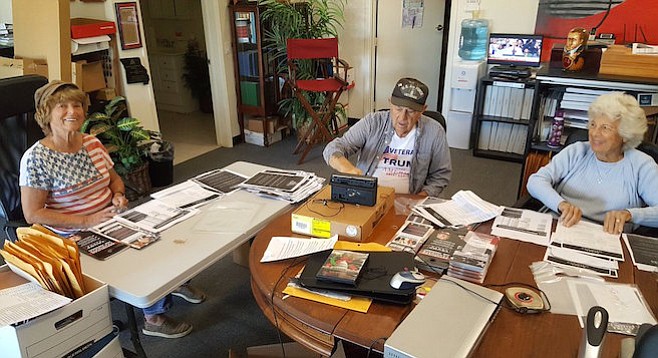 Over the weekend, Imperial Beach residents received in their mailboxes unsigned election fliers described as "disturbing" and "creepy." 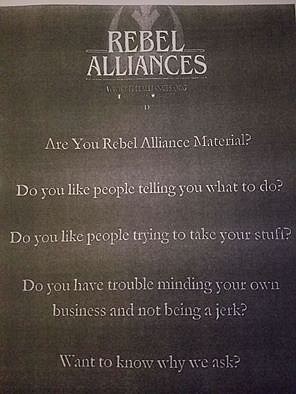 Front of one Rebel Alliances flier

The double-sided fliers, which accompanied official Republican campaign material, ask people to join "Rebel Alliances" and contain debunked conspiracy theories about Democratic presidential candidate Hillary Clinton. The symbol of the Rebel Alliance from the Star Wars films is featured on the flier. 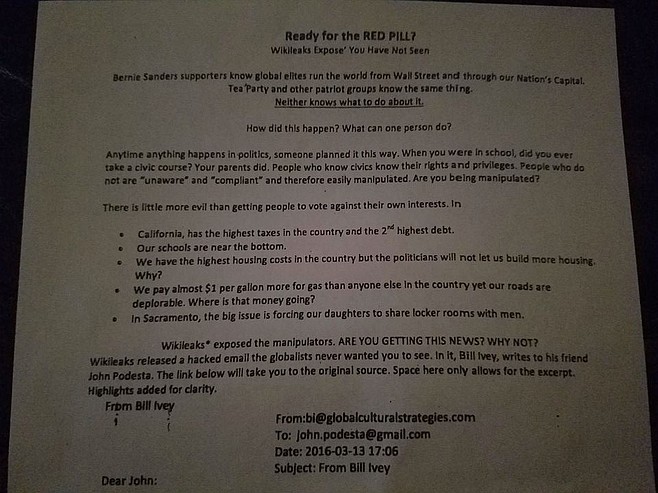 People associated with Imperial Beach’s Rebel Alliances, a small arch-conservative political group, were active in protesting Imperial Beach's adopting of a "Welcoming City" proclamation that was later rescinded due to improper protocol followed at its introduction. The Facebook page devoted to the issue includes posts that reflect anti-immigrant sentiment and allegations that the mayor of Imperial Beach might be a "Communist."

Rebel Alliances does not identify their members in their social media presence and did not reply to questions about their membership, but one local resident associated with the group, former Missouri state politician and Tea Party activist John Loudon, appears to be a participant in creating the fliers.

The fliers claim that Rebel Alliances works "without regard...to political party" and is "passionately non-partisan."

"As an avid Star Wars fan I was immediately drawn to the flier, but also the poor quality of the copy, as if the printer was low on toner," said Jennifer Tamayo of the pamphlet she received at home on November 5th.

Pinky Blackwell, who also received the flier, described them as "a couple pages of creepy vigilante join-our-cult crap" that was "telling us how to vote and how to be a certain 'type of person,'" she said via social media. "Took me a second to figure out what kind of underlying anger and hate this was coming from."

Others did not react so negatively. "It seems like something that can be more 'fun' than typical politics," posted Delia Michelle Sanchez.

One side of the flier asks a series of questions, such as, "Do you like people telling you what to do?" and "Do you have trouble minding your own business and not being a jerk?"

Another page, entitled "Ready for the RED PILL?" (a reference to the film The Matrix), is entirely devoted to a debunked conspiracy theory based on a Wikileaks email concerning Clinton and her campaign chairman, John Podesta, charging that they are among "global elites [that] run the world."

"I definitely don't like their way of Trump-style let's 'take back OUR POWER' recruitment, as small as their audience may be,” Blackwell said.

"Vigilante talk may get some people excited but for most of us normal folks, it's scary," Blackwell added. “We just want to live our lives in solace, do our duty, try to be kind to others, and vote from our heart, not through fear and anger."

Blackwell added that the flier was in the mailbox, even though it is illegal for anyone besides the post office to place items in people's mailboxes.

When asked on a Facebook thread dedicated to the fliers if he is a leader of Rebel Alliances, Loudon replied, "Roll Tide!" Responding to criticism later on the page, he wrote, "I took the red pill. Guessing u did not."

According to local resident Anne Pilgrim, Loudon manned a tent devoted to Rebel Alliances during a recent beach festival in Imperial Beach.

However, Dante Pamintuan, a local resident who has posted notices about Rebel Alliances meetings in the local Barrels Restaurant on Seacoast Drive, said in the Facebook discussion that it was "not true" that Loudon was a leader of the group.

Pamintuan and Loudon did not reply to questions by press time.

Maybe the studio will sue these guys as well. I would lolz.