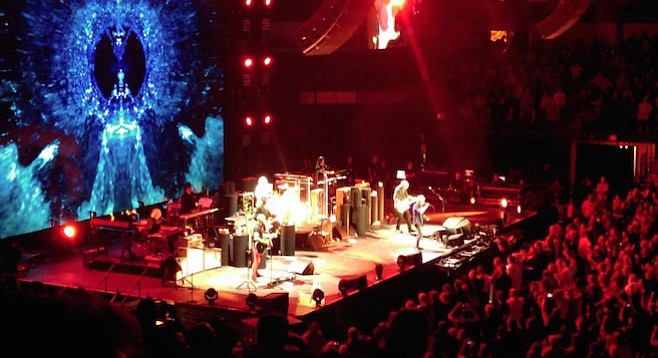 The Who. The Hits

Standing in ovation, the crowd bridged the (my) generation gap

Thirty-four years after their first farewell, mod-rockers the Who hit San Diego on their latest (rescheduled) swan song. With only two surviving members, this really could be the last time…

Okay, it's not the classic lineup, but Pete Townshend, Roger Daltrey, Pete's little brother Simon, and Zak “Son of Ringo” Starkey playing Who classics — it's a show worth seeing.

Slamming into gear with “Who Are You” before a visual backdrop of a pop-art exhibition, the bar is set high and rarely falls below it. “I Can See for Miles,” “Pictures of Lily,” “Bargain,” “Sparks,” and “See Me, Feel Me” all flow like a river of rock ’n’ roll ecstasy. “The Rock” is a standout number, while “Eminence Front” still sounds shite.

Pete and Roger tell anecdotes of their memoirs between songs like a pair of pub comedians. Mentions of the host city include stating that it’s one of their favorite places and a smile at weed smokers. “My Generation” delivers the immortal line "hope I die before I get old"; thankfully, two of the Who founders didn't succumb to this.

Daltrey's vocal on “Love Reign O' Me” is orgasmic. Zak Starkey is one of the few drummers worthy of sitting on Keith's throne and even manages to put his own stamp on it.  The final curtain was “Won't Get Fooled Again,” with Townshend's trademark windmilling guitar playing and Daltrey swinging the mic like a lasso until his primal scream coda. And with that, the set is set in stone.

Standing in ovation, the crowd bridged the (my) generation gap — many not even born at the Who's beginning and Entwistle and Moon sadly bowed out before its end. But the life and soul of their music will survive the ages.