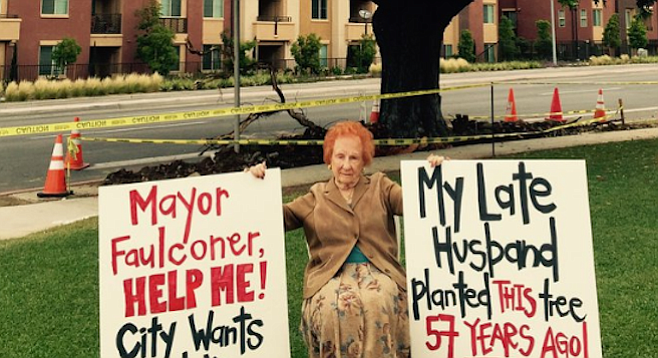 Despite mayor's word it could remain, attorney suspects "political stunt"

Marie Ostwald, a 91-year-old widow, is suing the City of San Diego to ensure that the pepper tree her husband planted in front of their Allied Gardens home in 1959 stays put.

Ostwald made headlines this past month when she spoke out against the city's plans to cut down the tree planted just feet from busy Mission Gorge Road. Ostwald had originally called the city to report a cracked and raised sidewalk in front of her home. City crews dispatched to the home found that the tree had lifted the sidewalk and decided it needed to be chopped down in order to provide safe access for pedestrians.

Ostwald phoned the media and a few days later mayor Kevin Faulconer visited the woman and with TV cameras rolling he informed her that the tree would be saved.

"We're going to keep this tree," Faulconer said. "We want you to have many more years [looking at it]."

Despite the visit, Ostwald has chosen to move forward with a lawsuit against the city in case the promise isn’t kept.

Ostwald's complaint, filed by her attorney Cory Briggs, claims that the city didn't have solid legal ground needed to cut the tree down in the first place.

“[The city proposed removing] the tree on May 9, 2016, without having first provided [Ostwald] with sufficient prior notice, without having obtained the necessary tree-removal permit, and without compliance with San Diego City Council Policy 900-19 or the applicable provisions of the San Diego Municipal Code," reads the complaint.

The council policy referred to in the lawsuit requires the city to provide 30 days’ notice to the property owner of a decision to remove a tree. During that time the property owner or any other interested party can petition the city to classify any tree 50 years or older as a "heritage tree," thus protecting it from removal. On May 9, Ostwald submitted her nomination form to save the tree.

If that designation is granted, the tree would be protected, according to the city-council policy, "regardless of sidewalk damage. Sidewalk relocation or redesign may be considered."

When asked whether the lawsuit will be placed on hold as a result of Faulconer's televised visit, attorney Briggs responded, “The mayor’s reprieve on Mother’s Day was probably a political stunt to help him avoid negative press before the June 7 election. If we learn that the mayor intends to allow the tree to be cut down, it may become necessary to seek an injunction to protect Mrs. Ostwald from further city abuse."

This isn't about the location of the tree or its safety or right-of-way issues. It is about being able to trust the mayor when he makes a promise. Well, can he be trusted? As he was being inaugurated, he "promised" to get to work on infrastructural repairs and maintenance. That was quite a long time ago, and I'm trying hard to remember when anything started. So, if he has not kept that promise, who should trust him on anything? I would not.

Sad, but he's just another cheap politician with a pretty face--and even prettier wife. When he can stop being jerked around by Deano Spanos and gets to work on the real needs of the city, maybe we can take him seriously Until then, when he makes a promise, hire a lawyer--which is what this lady did. Good for her!

But he is a conservative and a Republican so he must be honest. Right? Oh, never mind he is just another bought-and-paid-for political hack.

The City's sidewalk policy is one of the most convoluted ever imagined. A "right-of-way" is an easement granted by one party to another. So Mrs. Oswald owns the property, but has granted rights to the City of San Diego. This makes it difficult to know who is responsible when something goes wrong. Mrs. Oswald could be the person sued when someone trips, falls, and files a suit; this may or may not be the city's responsibility. However, since the city gets to make the rules, they may have also defined their rights to be more extensive than Mrs. Oswald has thought. Perhaps someone can enlighten us in more detail here on these rights and responsibilities.

in the previous mayor's reign, The Dusty Rhoads dog park in OB lost NINE trees due to mismanagement and lack of needed care :P

When a tenth tree split , due to lack of care, I called this mayor's office and complained

The person I spoke to, on the mayor's behalf, promised me the damaged tree would NOT be reMOVED as had previously been done to the others, but would be trimmed and "laced" so as to keep it healthy. This was DONE as promised, plus, the rest of the trees in the park were trimmed and laced to protect and preserve them as well!