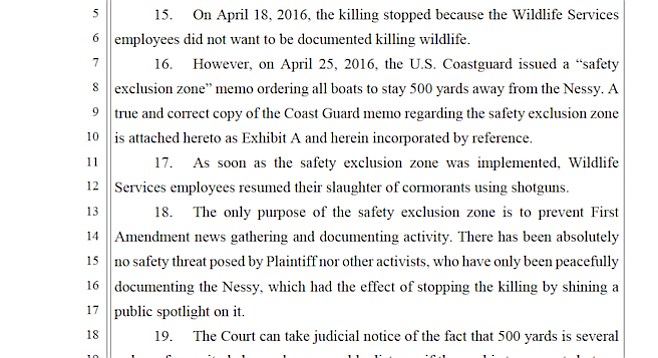 Millions of wild animals are secretly slaughtered annually by the United States government in a program to help corporate agriculture, says a group called Showing Animals Respect and Kindness (SHARK).

The group, based in Chicago, filed a suit in San Diego federal court April 29 against the Coast Guard, Department of Homeland Security, and individuals heading those government operations.

The suit claims that a "highly secretive" program called "Wildlife Services" kills certain wild animals with traps, snares, poisons, gas, and aerial gunning at the request of corporate agriculture. Millions of animals, including wolves, cougars, coyotes, and bears, are killed each year with taxpayer money, as Wildlife Services has refused congressional requests for information and won't reveal how much it spends.

In April, Wildlife Services began a program in Washington state to kill cormorants as a favor to the salmon industry, according to the suit. The Coast Guard issued an order for "safety exclusion zones" that requires boats to stay at least 500 yards from the government craft doing the killing. This was actually set up to keep SHARK representatives from reporting on the activity, says the suit.

Wildlife Services was supposed to be for public safety but it has morphed into an agency doing the dirty work for private agri/aqua-culture.

Ponzi: If the suit's claims are real, that is certainly what it looks like. Best, Don Bauder

Dennis Hull: That is the gist of the lawsuit. Wildlife Services should be renamed Wildlife Killing to help corporate agriculture. Best, Don Bauder

Svea Carroll: It is a case of government upending the balance of nature to help ag companies balance their books. Best, Don Bauder

Stupid people want to eat. We don't need no "agriculture".

Sjtorres: We do need agriculture. California provides a lot of it. But the government should not use taxpayer money to kill wild predator animals to help corporate ag. Best, Don Bauder

Sjtorres: "Corporate" does not mean "bad" much of the time, but crony capitalism has to be tamed, rather than mollycoddled. Best, Don Bauder

shirleyberan: Few would argue with that observation. Best, Don Bauder

Wilder Wright: Sounds like a bunch of bird brains there. Best, Don Bauder