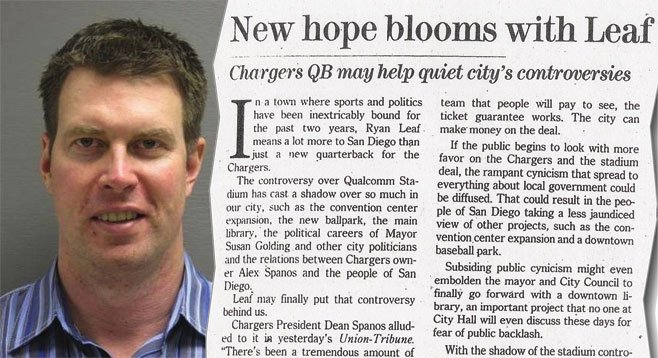 Prison was good for him, says ex-Chargers QB Ryan Leaf

"The power, the prestige, and the money" became his demons

Ryan Leaf, a former San Diego Chargers quarterback for whom the team had high hopes in the late '90s, said on the syndicated Dan Patrick Show yesterday (May 4) that his prison sentence was good for him in helping him turn his life around. He said he had attempted suicide in a garage after hitting a low point. A family member interrupted the attempt.

The Chargers gave up a lot to get Leaf — he was second overall draft choice in 1998 (Peyton Manning was first) — but he did not perform and was out of the National Football League in four years.

In 2010, he agreed to plead guilty to stealing pain pills. On the Patrick show, he said he had become addicted to Vicodin. He said it was the only drug he had ever taken, but it was "like heroin for somebody else."

Leaf said on the Patrick show that "the power, the prestige, and the money" became his demons. He said he did not want to let his teammates know that he was in personal trouble because a quarterback is supposed to be a leader.

He compared his own experience to that of Johnny Manziel, the former Texas A&M star quarterback who has been a bust in the NFL. Manziel has been videotaped drinking heavily at parties. In assessing the plight of the former Cleveland Browns quarterback, Leaf said, "behaviorally, it seems like you could be holding up a mirror to me."

Patrick pointed out that some people have questioned how sincere Leaf is about his alleged recovery.

His sincerity may be in doubt, but his statements are definitely eating crow, and in a large serving. The adulation that some of those athletes receive is just too much for their immature minds to handle. Many, many of them start to believe the hype, and since they have already learned that their small transgressions are ignored they do progressively more outrageous things. While doing wrong, they decide that they still deserve to be treated as celebs. He really fell far from grace. But as an ex-con now, what's Leaf to do with the rest of his life? This turn-around will last only as long as it seems to be working. I'd guess he's not out of the woods yet.

Let's see...in 1998 he signs a four-year contract for $31 million + and of that $11.25 million is a signing bonus which is GUARANTEED. Within four years he bombs out of the NFL. So let's say he's been paid say $15 million over the four years. Not bad for not "working out".

Now while in San Diego he hooks up with the Lucia family....you know the buckets of money guy...Don's written about him before. But over time Leaf fails that family too. Then apparently there's a period of wandering most likely, and later proved to be associated with drug abuse. And, like any addict who doesn't want to spend his own money, he expands his life of crime to stealing from others. He get caught repeatedly and finally is sent to prison for seven years in 2012. Sadly, he's out in 2014!

I'm just wondering does anyone really think he's changed. He's led a privileged life usually at the expense of others. I suspect he got plenty of money stashed somewhere. Why anyone would give this guy a platform in any medium is beyond reason.

Visduh: Yes, Dan Patrick closed the show with a statement indicating that some people question Leaf's sincerity. Leaf compared himself with Johnny Manziel, the former Texas A & M star, now out of the NFL after a very brief time. Manziel is generally connected with alcohol consumption, and went to a dry-out facility for awhile, but apparently didn't dry out. Best, Don Bauder

JustWondering: I watched most of the interview on Yahoo. It occurred to me that Leaf may have stashed some of that money offshore. He married Ray Lucia's daughter. (They later divorced.) He went into the financial consulting business and might have learned something about preserving assets outside the view of the IRS, although I am not accusing him or the Lucia family of that.

Had I been interviewing him, I would have asked him about that, but this was a sports talk show. Best, Don Bauder

Sad when someone has the world by the tail and insists on exploring what is just under the tail.

AlexClarke: There is a rumor that Leaf had used drugs in college, and a Washington State coach suspected or knew it, and didn't reveal it to the Chargers.

Still, the Chargers had an obligation to check out such rumors. They gave away a lot of draft choices and one good player to get second in line so they could draft Leaf. It's possible the Chargers did not do their homework on Leaf. Best, Don Bauder

Well if they did do their homework, they earned an F-.

JustWondering: San Diegans should give the team an F- for trying to get to LA, completely failing, and then coming back to San Diego and saying with a straight face that they decided they really loved San Diego and want to tap taxpayers for a stadium. They came back because any deal they have in LA is not a very profitable one. Either that, or there is no possible deal at all.

The team's claim that it has an option in LA should get an F-. Best, Don Bauder

As long as more than 33.3% of the voters give them an "N" on the ballot that's all that matters for now.

ImJustABill: Well, let's hope that they will have to get 2/3rds. That one legal decision would have to be twisted beyond recognition for the vote to be 50 percent plus 1. Best, Don Bauder

People tend to forget that the other league owners must approve any franchise that wants to re-locate. Let's keep in mind that the league owners shot down the Spanos plan, 30-2..a fairly unanimous thumping. ......apparently the league wants a team in our market.....and this was after Spanos brought in Disney CEO, Bob Iger to make the case. The owners were probably not impressed and not too fond of the Spanos plan to move...and probably not too fond of Spanos, himself.

jv33: San Diego is the 17th largest metro market, although only about the 26th largest media market. Still, that is enough to support a team, the league apparently believes.

However, San Diego does not have the surfeit of superrich that the league is now appealing to. Personal seat licenses won't work in San Diego, and the Chargers know it (Fabiani confirmed that to me several years ago), but keep saying they will be used for the convadium. Luxury suites would not be that successful in San Diego. Best, Don Bauder

Sadly, the sheeple of San Diego will probably fall for the fallacy and vote for the ballot measure. If they do they deserve the pot holed filled streets, eliminated or reduced services and ultimately new AND additional taxes. Those taxes will be necessary to backfill the shortfalls in revenue caused by highest hotel tax in the nation. When people decide NOT to vacation in San Diego because of higher taxes and fees just watch the jobs in the tourist industries disappear.

But a billionaire and his family will be laughing all the way to the bank, while we the sheeple of San Diego watch millionaires play a game in his multi-billion dollar palace 10 times a year. Meanwhile, in San Diego unemployment rises and the very taxes that pay for many of our services goes lower and lower and that new Convention Center annex, you know the "Con-Vadium" sits idle most of the year sucking the city treasury dry. You see the Spanos and the Chargers don't care about the new unused convention annex, hell they don't even care if it gets finished just as long as the "Vadium" part of this huge "Con" meets their goals.

But don't listen to my opinion, read Ray Ellis' op/ed published in the VOSD. Ray is a candidate for the District one Council Seat in the up coming election. He, and Chris Cate, District Five Councilman make some great points about the complete lack of details of the Charger's game plan for a new stadium downtown. http://www.voiceofsandiego.org/topics/opinion/chargers-plan-puts-san-diego-tourism-economy-risk/

JustWondering: I agree with you 100 percent. With the infrastructure so shamefully tattered, San Diego will be the laughingstock of the nation if it buys the Spanos fairy tale, especially after the team tried so hard -- openly -- to go to LA. Best, Don Bauder

Leaf sounded sincere to me in the interview - but I certainly have no way of knowing for sure. At this point I would wish him well if he is sincere about trying to lead a responsible productive life. Obviously the Leaf draft was a huge mistake by the Chargers.

I don't expect Manziel to ever make it the NFL. Manziel has vast family wealth to fall back on and I don't think he's "hungry" enough to put in the effort to stay on an NFL roster.

I think many of the best QB's of recent years spend a lot more time working out and studying plays than they spend partying.

ImJustABill: Yes, Namath was a party boy. Mickey Mantle was a lush. But I agree with you that they are the exceptions, at least at this time in sports history. The pay is too good for players to risk being party boys.

About the Namath victory in that Super Bowl: a lot of informed people think that game was fixed. I agree Namath's record was not so hot through the years. He is a bit of a myth. Best, Don Bauder

Namath, myth or not, "the game" fixed or not, Namath was smart, or should I say savvy enough to exploit all he could.

I'm not sure he's exploited all he could. Namath's post-playing broadcasting career has been hurt by at least one incident of obvious on-air drunkenness. Howard Cosell had his share of those too but that was a different era.

another has been seeking attention?

how long before we see him on dancing with the stars ?

Murphyjunk: Namath's knees are shot. That's a common affliction of retired football players. So I don't think he will be on Dancing with the Stars. Best, Don Bauder

ImJustABill: Didn't Cosell vomit during a broadcast? I have a vague memory of that. I don't think the cameras were on him, though. Best, Don Bauder

If I remember right Cosell supposedly vomitted during halftime of a Monday Night Football game but still managed to be just coherent enough to work through it.

ImJustABill: I am sure that information is online. It even made newspaper stories after it happened, as I recall. Best, Don Bauder