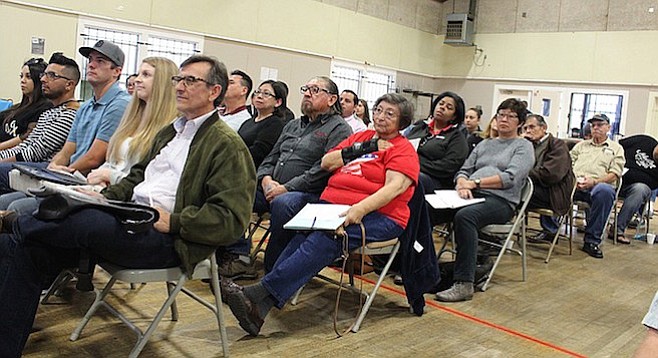 After derailment in 2002, councilman Alvarez gets project on track

Frank E. Beyer, a border baron who co-owned the Sunset Inn and Racetrack in Tijuana, lived in San Ysidro during the Prohibition days. He purportedly drank a bottle of whiskey a day and could be seen at the racetrack in a crumpled gray suit. He also donated money for the San Ysidro Public Library. In return, Beyer wanted the library to have a smoking room, replete with a spittoon and a copy of the racy Police Gazette magazine.

The San Ysidro Public Library was completed in 1924 and today is a San Diego historic site. As the oldest public library in the county, it’s also crowded with lines of people waiting to use the computers and access other services.

In 1984 the library was expanded from 1200 to 4089 square feet. The sign in front of the building also changed from English to Spanish in order to better represent the community. Residents, however, criticized the expansion, saying the library still wasn’t big enough to meet the needs of the growing community — which today stands at about 29,000.

By 1996, the San Ysidro School District was willing to donate 766 acres of land along Otay Mesa Road. An architect was selected to begin design work, but in 2002, councilman Ralph Inzunza (who eventually served a 21-month prison sentence after being convicted on federal corruption charges) held an open meeting to announce a change of location. Developer Sam Marasco wanted to build the library inside the Las Americas shopping center, which he owned.

Community members protested, saying that the Otay Mesa site would serve 85 percent of the community due to its location within the heart of San Ysidro; a library in the Las Americas mall would serve only 15 percent of residents. But community voices went unheard. The library was never built. 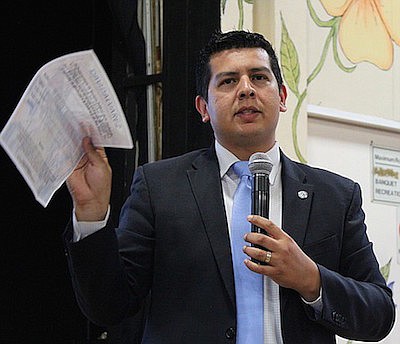 On Friday, April 29th, councilman David Alvarez announced to a packed San Ysidro Civic Center that the community would finally get their new library. “My work was to get you the land and the money, and I did that.”

Representatives of the Public Works Department told the audience that by winter 2019 a 15,000-square-foot library should be built at 123 E. Seaward Avenue — a 1.62-acre lot acquired by the city in 2015. The project budget is estimated at $12.8 million, with much of it obtained through bonds and development impact fees. The funding gap has been closed by a private donation of $1.5 million by Lloyd de Llamas, who lived in San Ysidro for much of his life.

Alvarez said, “The day is finally here where the community gets to speak and share their ideas about what they want this library to look like.”

Representatives of four architectural firms — competing to create interior and exterior designs — listened to residents who highlighted the problems associated with the lack of an adequate library. They said they need a teen center, more books for children, technology designed to benefit students now and ten years from now, a space that highlights San Ysidro history, a space that respects the Latino heritage of the majority of residents (including perhaps Mexican tiles or a gazebo for Aztec dancers), a café, large windows, and abundant natural light.

The audience applauded when a community member asked for a roof that could open in an observatory style. Another resident asked for a water fountain with lighting. The assistant deputy director of public works commented, “I will take that input, but I see a lot of maintenance issues with that, so no promises.”

Community members are encouraged to submit additional suggestions by May 15th. Send an email or go to sandiego.gov/newsybl.

Will all the books be in Spanish? San Y Skid Row needs a library like Hillcrest needs Baptists.

Not so, Alex. The library is a lot more than books these days. Aside from offering an almost unlimited supply of movies (dvds), there is also music cd's, both classic and contemporary, computers, wifi, children's programs, book clubs, and pretty much whatever the community could use. Depending on the facility, there may also be movies, classes, workshops, and meeting space for local groups. The best part is, if the branch does not have what you are looking for they can get it for you by borrowing from the Central or any of the other branches, so you bascially have the entire library system at your disposal. And what's even better is the price: free. You get it all for nothing more than giving them your name and address. The library has become so much more than it was when I was a kid. Sydro will benefit quite a lot from having a new one. Instead of building dumbass football stadiums, San Diegans would benefit so much more from having all the small branches expanded into larger, modern libraries.

Well, ok I can't disagree and I absolutely agree with not building a dumb ass stadium.