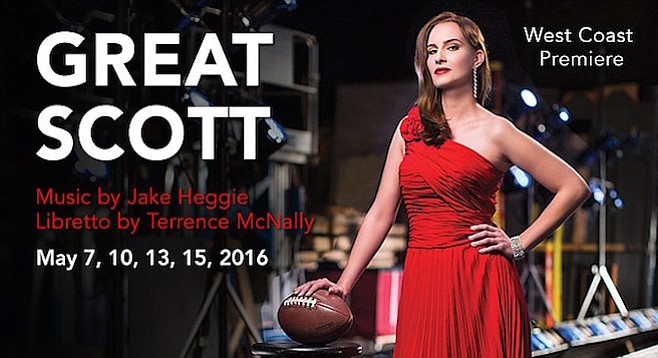 The West Coast premiere of Jake Heggie’s opera Great Scott opens at San Diego Opera on Saturday, May 7, at 7 p.m. This is the second production of the show, which premiered at Dallas Opera.

Heggie’s last opera to be performed at SDO was Moby Dick. The production was an artistic triumph for the company. Great Scott is in a lighter vein than Moby Dick, but then again everything is lighter than Moby Dick.

Great Scott is full of humor, but the themes have substance. The story is about Arden Scott, a divorced single mother who returns to her hometown in Texas. If this sounds familiar, it is. Hope Floats starring Sandra Bullock and Harry Connick Jr. also had this basic story frame.

The Arden Scott character has just become a famous opera singer and returns home to help save the opera company that is run by her mentor. Meanwhile, the city is enthralled with its football team, which is going to the Super Bowl.

The show is full of operatic jokes, which often include the musical style. In general, Heggie’s musical style sings. Instead of using rhythmic gymnastics and intervallic ejaculations, Heggie tends to write a melody.

There are four performances of Great Scott at the Civic Theater.