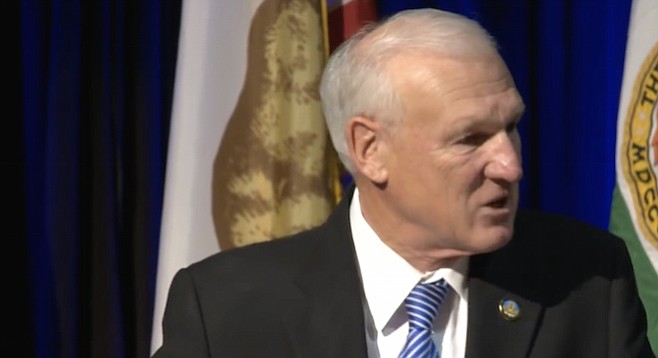 SDG&E and the behesting tales of two Roberts

"No one is a better partner in clean technology than San Diego Gas & Electric," effused Roberts, according to a transcript of the February 25 address posted on the county's website.

Added the supervisor, "SDG&E is the first utility in California to have 33 percent of its electricity come from renewable sources, and I expect it will be the first to reach 50 percent."

He continued, "Along those lines I am happy to announce a partnership with the utility as it launches the installation of 3500 electric-vehicle chargers throughout our region."

Pledged Roberts, "I will work with SDG&E to help create a future where we are plugging in instead of fueling up." He then proclaimed, "We are leaving our children, and grandchildren, a much cleaner county than we inherited."

An "animated video clip" plugging the utility and its program was shown during the pitch. 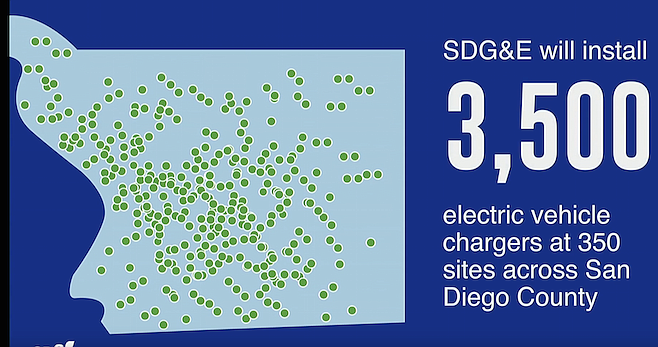 Ron Roberts's talking point eclipsed the fact that SDG&E's rates have long been among the highest in the nation.

If Roberts's praise for the big utility — whose rates have long been among the highest in the nation — seemed over the top, a possible hint of the reason for his enthusiasm was revealed March 30, when Roberts filed with the county clerk a disclosure document required by state law.

The report shows that SDG&E gave Roberts $7500 to finance his speech. According to the filing, the payment, designated on the form for "Annual State of the County Address," was made March 8, a bit more than two weeks after the supervisor's friendly remarks about the company.

The document doesn't say what the cash was used for; instead of occurring in the chambers of the board, the speech was held amid the splendor of the Hall of Champions in Balboa Park.

Ron Roberts hasn't been alone among his board colleagues in soliciting special interests to pay for the annual puffery otherwise known as the state of the county address. 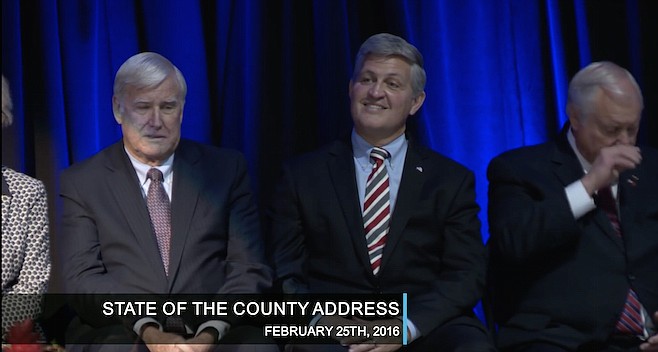 Last June, the state's Fair Political Practices Commission dispatched a warning letter to Democrat Dave Roberts, (no relation to Ron Roberts) for a long delay in reporting cash from a labor union to cover the state of the county oration of the previous year.

"The Enforcement Division found that you, as a public official, requested that the [United Domestic Workers union] make a payment, at your behest, to the District 3 Special Events Fund for use at the State of the County address," wrote enforcement chief Galena West in a June 18, 2015, letter to Dave Roberts.

"The [union] subsequently agreed to make a payment of $5000 on June 25, 2014. Therefore, a behested payment, for which you had reporting obligations under the Act, was made on your behalf."

Though Dave Roberts didn't file a disclosure report of the gift until May 22, 2015, according to the letter, he was let off with a warning.

"Although this filing was not made within 30 days of the actual date of the payment," wrote West, "we determined that further enforcement action for the late filing of this report was not warranted since there was little public harm and you self-reported this violation."

There needs to be a public takeover of the "big 4" stock holder owned utility companies; SDG&E (Sempra), Pacific Gas and Electric, Southern California Edison, and Southern California Gas Company (Sempra). Their relationships with the California Public Utilities Commission (just now being discovered) are obscene. Their internal management structure is a "good old boys" joke. Their fiscal model of employee salaries (including unbridled overtime compensation), benefits, and retirement perks out of line. Their managerial errors including, among others, the Edison/SDG&E San Onofre decacle, the PG&E Bay area pipeline explosion, and the recent Southern Gas Co leaks costing millions will be passed on to the rate payers while the stockholders, including many of their employees will continue to reap fat dividends and stock gains. That's why we are continually subjected to rates which are among the highest 3 in the nation. What a crock!

The best solution is ratepayer owned. Imperial Irrigation District (IID) which supplies electricity to the east end of the Coachella Valley (La Quinta, Indio, Coachella, Thermal, etc.) has one rate for all electricity and that rate is 40% less than SCE. When ratepayer owned the utility operates as a non profit. You do not want a government run utility with clown car politicians in charge.