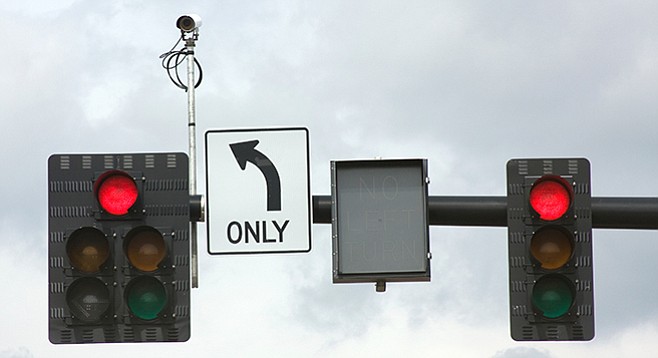 Cash from San Diego traffic-ticket fines is seriously down, says the county auditor’s office. Over the past five years, according to a March 4 report, “collections from penalty assessments fell from $13,749,562 to $7,910,885 (42 percent decline). During the same period, collections from court fees and fines declined from $30,880,726 to $26,345,547 (15 percent decline).” Notes the document, “Traffic case filings have declined over the period reviewed, and this has likely impacted revenue streams. If a case is never filed, revenue will not be generated.”

One possible damper: the movement against red-light enforcement cameras. “While other factors weighed in favor of removing the red light cameras, the County likely experienced a material decrease in revenue when those citations stopped. As noted, traffic-related violations produce the highest volume of citations each year.”

Whether or not more defendants were opting for community service, therefore reducing cash flow, or just welching on their payments, was not determined, says the document. Those numbers “are not captured by current Court case management or financial management systems. As a result, [auditors] could not determine the extent to which defendant and/or judicial discretion have impacted the decline of court revenues.”

But more information is on the way. “The Court is currently implementing a new system that will combine its decades-old financial and case management systems into one.”