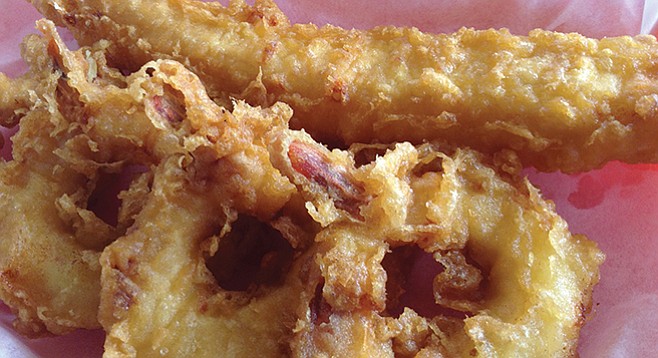 “I wipe down the tables, grandpa cooks the fish, and mom takes orders at the register.”

“Ho-kay,” says Ria. “Your funeral, buddy. Know how many calories and fat in a batter-fried slab of cod?”

Ria’s one of our bestest friends. But she’s purer than me and Carla on the food front.

Whatever...a minute later, we’re sweeping up to this final corner unit in an unnamed strip mall in Egger Heights, little-known corner of I.B. Big swathe of empty land stretches across the road.

“That was Marian High School,” says Ria. “They’re turning it into — guess what? — condos.”

We’re parked right in front of a flag. One of those vertical ones flapping in the wind. “Fish & Chips,” it reads.

“You’d really have to be a fanatical affishianado — heh-heh — to track this down,” I say to Ria. She doesn’t bite.

Inside, we’re looking at a wall menu while the lady, Karen, waits behind the order hole. Can’t help noticing: the stainless kitchen is sparkling. Not a splash of batter in sight. Also, clean brown floor tiles out here, white walls, and dreamified pics of San Diego from across the bay.

Pricewise, I have to remember this is a fish joint. So we’re not talking bargain-basement here. But reasonable. Item Number 1 is “Classic Fish ’N’ Chips.” Costs $9.99. Comes with two fish fillets, chips, and a drink. 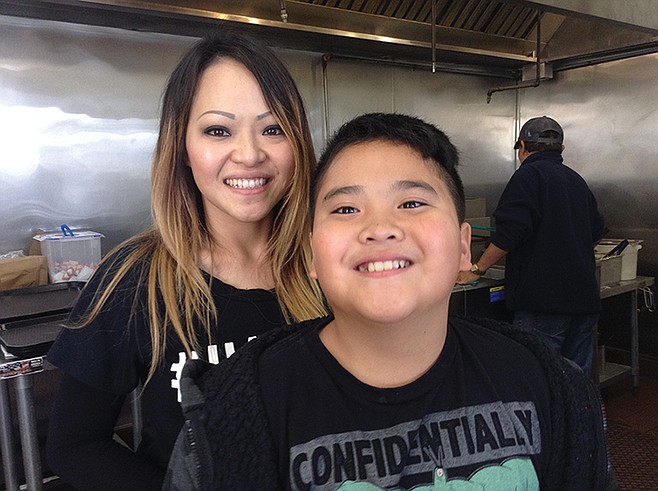 “And you don’t have to have fish and chips,” says this kid. Sean. Karen’s son. “You can have the mushrooms or zucchini or hushpuppies or onion rings instead.”

Oh, yeah. I see under “veggies” that fries, fried mushrooms, hushpuppies, fried zucchini, and onion rings all cost the same: $3.

He’s an engaging, bright kid. “I wipe down the tables, grandpa cooks the fish, and mom takes orders at the register,” he tells Ria.

Karen’s husband is ex–Air Force and now works as a civilian contractor for the U.S. military.

Guy in line behind me’s getting antsy. Okay: fish and chips. Ten bucks. Or, turns out, you can just buy the fish fillets at $2.95 per fillet.

’Course, you can go all the way up to “Seafood Delight” for $36.99 in the “family meals” section. That buys you five fish fillets, 10 jumbo shrimp, countless chips, and coleslaw.

“Hungry?” I ask Ria. Me, I haven’t eaten since Carla and I dined on leftover sandwiches last night. Ria says something about is there a bull moose in the north woods, so what the heck. Let’s bust the budget a bit. 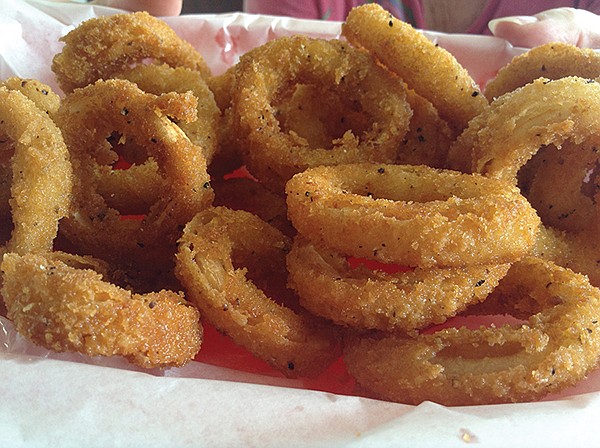 Ria’s calamari rings, helped by the house cocktail sauce, a mix of horseradish and ketchup

And, boy, it’s a real sampler. Way too much. But we both know we’ll be taking back peace offerings to our mates. 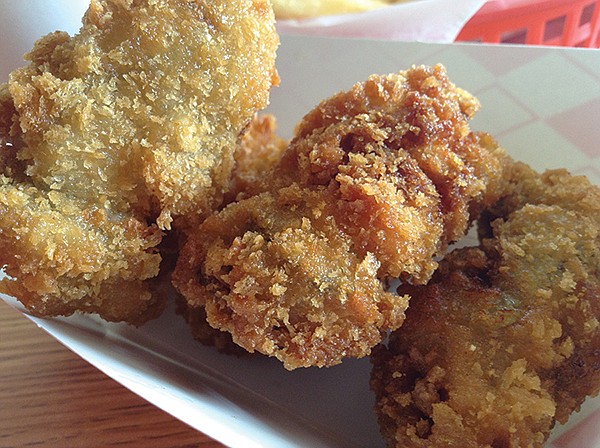 “It was my husband’s idea to start this business,” says Karen when I ask her. “But we were struggling with this shop, and we had preemie babies — Sean was only three pounds when he was born — and the medical costs, and we’re sending them to Catholic school. So, we realized, my husband would have to go back again, for the money. That’s where he is now, in and out of danger zones since 2008.”

She has restaurants in the blood, though. “My aunties have opened many pho restaurants in Laos,” she says. “And one cousin has this restaurant in France.” She shows me a photo of a smart-looking red-painted place called “L’Éléphant Blanc.”

We climb into Ria’s wagon. Head past where the Marian High School site is about to transform into a sea of Shea Homes. Thousands of potential customers, if Crisp Fish N’ Chips can hang in there.