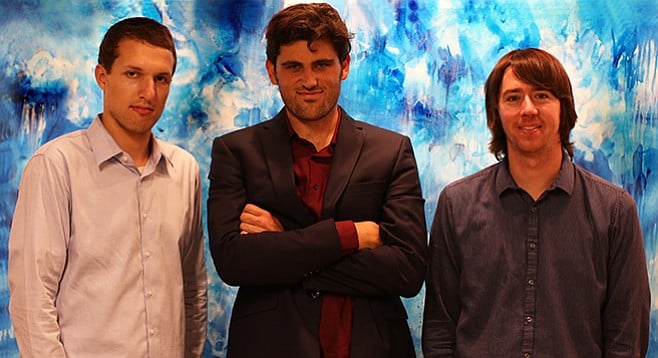 The recent passing of Keith Emerson underscores how keyboards don’t play as big a role in pop music as in the days when Emerson, Lake, & Palmer, Deep Purple, Yes, and Edgar Winter ruled the world.

“I just think piano is the mother of all instruments,” says Brett Harris, who moved to San Diego from Arizona so he could get a degree in music composition from the University of San Diego.

...by The Wind Playing Tricks

Harris admits his piano-centric trio, The Wind Playing Tricks, has a hard time swimming against the tide of guitar-driven rock.

“It can make it harder to fit in if you’re in an outsider genre.” And The Wind Playing Tricks is certainly “outsider.”

There are no vocals. And then there’re those time changes.

“In my studies I learned that not everything needs to be said in four or three [time signature]. We have one piece that is three/two. And there’s one phrase that’s 7/7/7/6/7.”

“San Diego is famous for math-rock bands,” Harris says. “Chon has all sorts of time and harmony changes. And there was all the work Jimmy LaValle did with Tristeza and Album Leaf. It inspires us to know bands like that and Sleeping People come from San Diego. It’s encouraging to know Earthless, which has no vocals, can fill the Casbah two nights in a row. Chon proves that an instrumental-based band can tour the country and fill houses.... The pop-music scene is dominated by guitars, synthesizers, and drum beats. It’s gratifying to see people can still do it another way.”

Brett makes it clear that he plays “piano” and not “keyboards.” He makes sure the electronic keyboards he plays onstage sound like the real thing.

“Face it, it’s hard to have a [traditional] piano. Not everyone has that option.”

And fellow millennials, he says, have found it too easy to rely on available technology. “Now you can get a MIDI keyboard where it’s easy to get nice-sounding chords or an arpeggio by just pushing a button.”

The Wind Playing Tricks appears Wednesday, April 6, with Wolves of Eden and Philosophers Ray Gun at the Hideout.