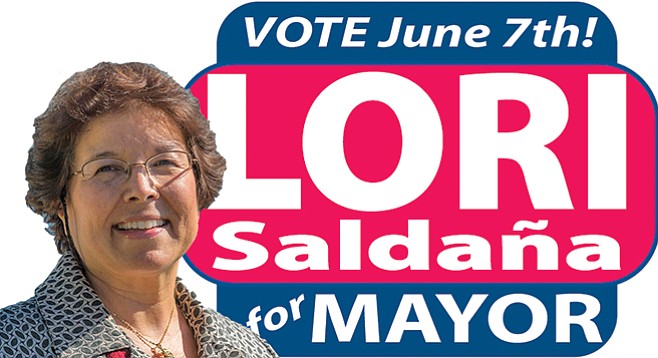 Democrat-turned-independent Lori Saldaña, who placed third in last month’s race for San Diego mayor, is looking for more campaign cash for a low-five-figure post-election personal payback. “I will formally close my campaign account at the end of July,” says a fundraising email to hoped-for financial angels from the ex-assemblywoman. “We made it clear San Diego needs a Mayor who is willing to work on issues like improving public safety, closing the income inequality gap, providing more affordable housing and improving support for people who are homeless…. However, I need your help to pay some final campaign debts.”

According to her most recently posted disclosure statement, for the period ending May 21, the campaign fund had outstanding debts of $11,270, with the $10,000 owed to Saldaña herself for a personal loan she made on January 19. Expenses included $7500 paid to campaign manager Michael Kreizenbeck and $1000 for treasurer Simon Mayeski. As of the end of the period, $50,101 had been raised and $47,598 spent.

She is stupid and deserves nothing. She ran as an independent therefore she had no chance of winning. Anyone with more than a single digit IQ knew that Faulconer had the election in the bag before the ballots were printed.

She and many others run for mayor for the publicity and to feed their ego, just like Carl DeMaio did. That behavior will continue.

Really??? "Stupid?" "Like Carl DeMaio?" Both comments slander Lori Saldana. In this debased political moment of Clinton/Trump, I think Lori Saldana deserves credit and thanks, if not a financial bailout.

The truth is that Saldana is intelligent and idealistic. She left the weak and troubled local Democratic party to register as Independent. She is politically experienced, having run and been elected to the State Assembly. And she has courage: Saldana was the ONLY liberal/progressive willing to challenge GOP Mayor Kevin Faulconer in his unobstructed cakewalk to re-election.

I agree about Saldaña's background and intelligence, and we need more progressives in office. But it made no sense for her to run, as she couldn't possibly have beaten Faulconer. So it was an exercise in futility. In politics, as in life, we have to choose our battles carefully.

Lori is a hero. She understands the majority of the residents of San Diego are not being represented by Faulconer , who is working for the developers, the wealthy and his own future. She also understands that the local Democratic party works for the same people. Its becoming pretty clear that the local Democrats largest contributor (Irwin Jacobs) was for Faulconer so most likely they decided to help keep him and his developer friendly elite in power by not supporting a candidate. Sadly in this city the Republicans and Democrats are essentially the same. However, when Lori got in the race as an independent they did have to find a candidate. So they half-heartedly supported Ed Harris, all the while making it clear he would lose. We need to get control of our city away from the folks that control it on behalf of the old guard that has treated it as their private treasure chest for generations and into the control of elected officials who see it as the peoples city. Lori stood up to our sad status quo and deserves our respect.

Following the logic of dwbat to a point, it made "no sense" for Senator Bernie Sanders to run for President, as he couldn't "possibly" beat the rigged machinations of a corrupt partisan Democratic National Committee or the millions in dark money of the Clinton PACs. But has it been an "exercise in futility?" I don't think so, and neither do 13 million other voters who have been moved by the overarching message that some battles are worth fighting, win or lose.

Bernie had much more of a chance to win than Saldaña did. I never said HIS campaign was an "exercise in futility." We're talking apples and oranges here. Bernie spread an amazing, national, historic message that will endure. Who can even remember anything Saldaña said? I don't think she "moved the needle" much. Sanders practically blew the needle off the meter.