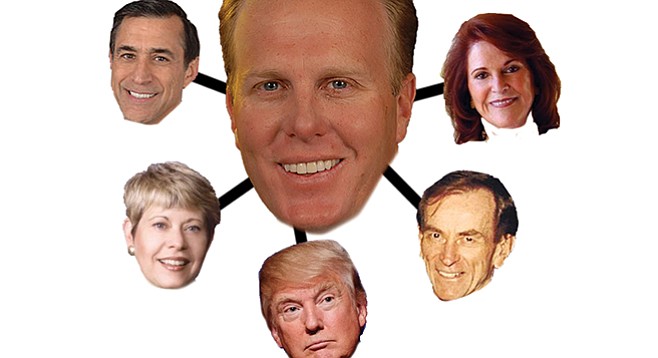 All the mayor’s moneyed friends

North County’s Issa has been active

Held at the Hotel del Coronado, with net proceeds going to the San Diego chapter of the USO, the lavish gala attracted $30,000 from the nonprofit Issa Family Foundation run by Lebanese-American Republican congressman Darrell Issa, said to be the wealthiest member of the House. Other causes favored by the foundation run by Issa, who has endorsed Donald Trump’s presidential bid, include an Underwriting Gala for the American Task Force for Lebanon, with $57,000, and the Arab American Institute Foundation, which got $5000, says a 2015 disclosure report. In addition, Issa’s foundation kicked in $50,000 to the well-heeled Rancho Santa Fe Foundation, and gave $20,000 to the San Diego Blood Bank Foundation for its Chargers blood drive.

North County’s Issa has been a key backer of the professional football team’s controversial November ballot bid for a tax-subsidized stadium in downtown San Diego. In addition to Issa’s contribution, the Sid and Jenny Craig Foundation, run by diet maven Jenny Craig, who also backs Trump, came up with $5000 for the USO bash. According to the website of the California Fair Political Practices Commission, “a behested payment is when an elected official or a member of California’s Public Utilities Commission solicits a donation from someone for an organization,” such as a nonprofit. “The donation must be used for legislative, governmental or charitable purposes, and it is not considered a campaign contribution or gift. While state law limits the amount of campaign contributions and gifts, there are no limits on behested payments. However, the official must report behested payments of $5,000 or more made at his or her request.”

Faulconer’s wife Katherine, billed as “first lady” in a Union-Tribune advertisement for the June 4 Coronado blow-out, was listed as co-chair of the gala. Not credited among the $5000-and-up donors on Faulconer’s behest list but present for the fundraiser, according to the Rancho Santa Fe Review, was retired admiral Ronne Froman and General Atomics co-owner Linden Blue. The La Jollan is the maker of the Predator drone. Defense contracting giant Northrup Grumman, with a competing line of killer aerial robots, gave $10,000. Grand total of the cash raised at the mayor’s behest was $356,100, according to Faulconer’s city filing.

But how much the USO actually netted from the posh mayoral tribute and what was spent on the evening’s food, booze, entertainment, and promotion won’t be made public until next year, when the military charity is scheduled to file its 2016 financial disclosure with the IRS.

Follow the money and it will lead you to the owners and operators of the politician. Money talks and the rest of us walk. Money buys access and influence no money you don't matter.

Kevin Faulconer is a puppet. The moneyed establishment places bets on a variety of candidates just like they would on racehorses. In hopes of a big win down the line. Kevin is not very bright, he had a low GPA at SDSU and look courses like "surfing." You bet he needs money because he sure doesn't have brains.