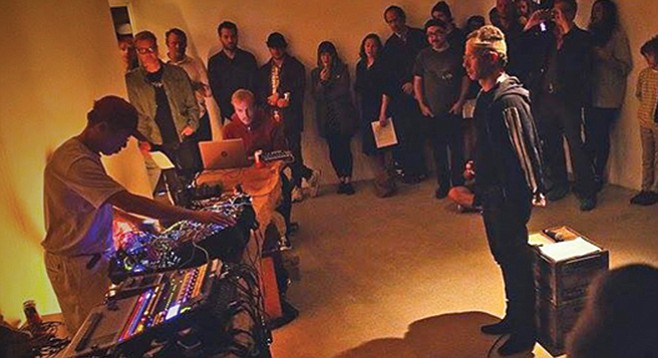 A crowd has gathered around Per Huttner. He stands upright in a dark room, not moving, eyes fixed on a white sheet of paper in his hand, wires snaking from his skull. Doctor Stephen Whitmarsh manipulates Huttner’s brain chatter on a glowing console and relays the thought forms to Jean-Louis Huhta, the musician. There, Huttner’s recital of Samuel Beckett’s Ohio Impromptu returns in echoing, disembodied fragments. It’s not the beginning of a science-fiction cyber-ritual, but rather a sound-and-technology experiment called EEGsynth by European collective 1 + 1 = 3, guest residents at art house A Ship in the Woods this past April.

The EEGsynth takes signals from Huttner’s jaw movement along with alpha and theta brain-wave activity, runs them through Whitmarsh’s software, and processes them via Huhta’s synthesizer patches to create a live loop of distorted reading. 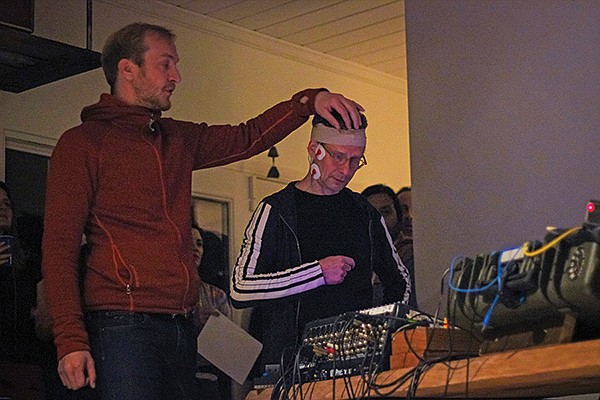 “This way of dealing with brain data in real-time analysis and feedback is a field by itself, especially as these technologies become more available,” Dr. Whitmarsh, who holds degrees in experimental psychology and neuroscience from universities in the Netherlands, says in a Q&A session after the performance. “A big part of my mind while I was looking at the signal was just praying that it would work. To see that it works and that we’ve created this interface I think shows we’ve found a lot of solutions that will be encountered by scientists who are studying this technology, so we plan to present them in a scientific paper.”

“I must say that tonight felt a bit muddled compared to the sessions we’ve been having this week,” says Huhta, a Swedish composer and acid-techno musician. “There have been much clearer instances. For me, it’s an ongoing process of delving into this machine to see what I can do with this signal I’m receiving from Per.”

“It’s very different every time,” agrees Huttner, an artist from Sweden. “I think we are interested less in control and more in this element of surprise. There are a lot of these interfaces where people are paralyzed and can play music and things like that. We’re more interested in saying, ‘Okay, the body has this voice that we’re used to, but the body has other voices, and how can we play with that?’ I mean, I never knew what my jaw sounded like before, and that’s interesting, so it’s more about throwing ourselves off the cliff and seeing what comes up.” 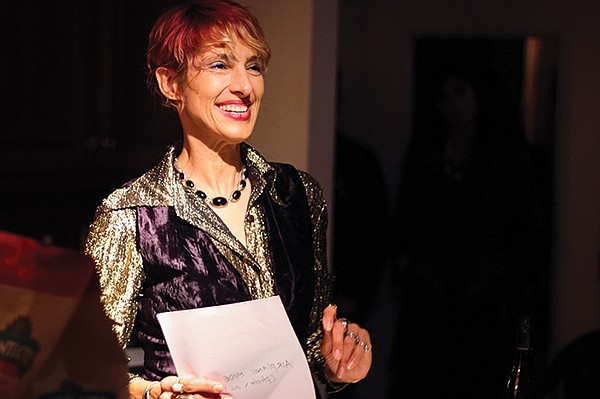 Curator Lianne Mueller says A Ship in the Woods will be focusing on events and participation.

This intersection of experimentation, artistic vision, and scientific mindfulness is exemplary of the projects that A Ship in the Woods curates in their quarterly expositions and residencies. The nonprofit relocated from Del Mar to Escondido last August, taking several months to revamp the mid-century-turned-modern-residential estate and surrounding 2.5 acres of jungle gardens before their grand opening on June 4. The event featured 25 artists and drew around 600 attendees. 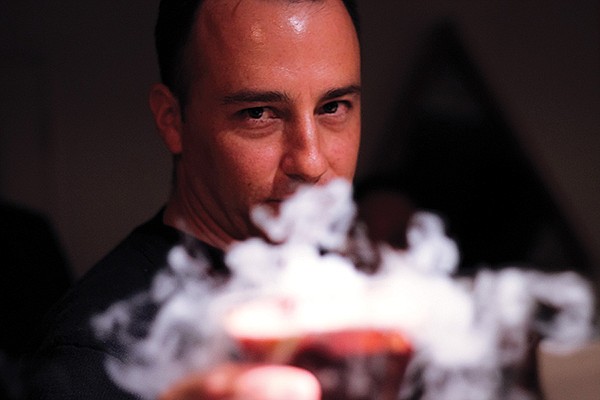 A guest made bubbly cocktails in tribute to the late Prince.

“We’re here in San Diego to stay,” curator Lianne Mueller later told me as guests sipped bubbling dry-ice cocktails made by a friend of the house and dubbed “Purple Rain” in honor of a recently departed icon of rock nobility. “Now that we own the house [the Del Mar location was leased], we are building a recording studio and performance space. We’re planning more workshops and much more of a retreat atmosphere. We’ll be engaging and learning from our guests and audience. The emphasis is on events and even more, participation. Engaging on a personal level.”

A Ship in the Woods

Engage the new stage with a day-show from British cow-post-punk prototypes the Mekons on September 25 with Sun Foot (Panache) and Sam Coomes (Quasi, Elliott Smith).