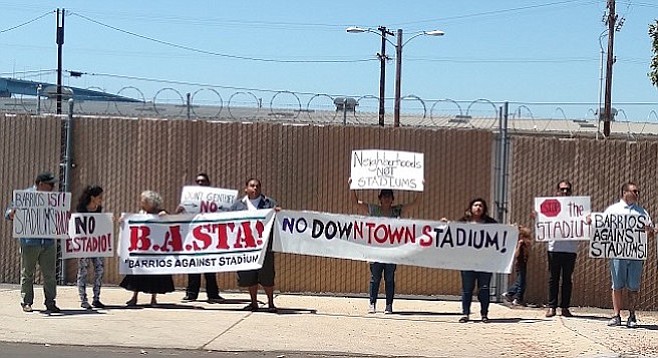 "Any new jobs are going to be for new residents who can afford to live here."

Chargers brass was in Barrio Logan on Friday (July 15) pitching a new stadium the team hopes will be built for them at the edge of the neighborhood during a community fundraising luncheon.

A group of locals billing itself as BASTA, or Barrios Against Stadiums, quietly assembled across the street, picketing against a proposal they say could be devastating for local residents.

"For us, a new downtown stadium one block outside our community is going to have a tremendously negative effect on the renting residents and small businesses of Barrio Logan," said local Brent Beltran. "Barrio Logan is a community of renters. If you build a stadium and an entire upscale entertainment district to go around it, the cost is going to leach into surrounding areas.

"Property values will rise, which is great for owners, but the majority of people who live here are renting, and the probability is that rents will go up both for residents and small businesses."

Beltran echoed the sentiments of several others in the dozen or so demonstrators that the group held no ill will against the Chargers, despite their opposition to the team's relocation plans.

"Most of us are Charger fans — we're not bringing hate on the Chargers. But we don't want a stadium that's going to drive our residents out of our community."

He also refuted claims that have been floated proposing that redevelopment could result in a boon for the local jobs market.

"If they're bringing jobs into the community, who are those jobs going to be for? By the time the stadium gets built, many of the people living here now are going to be pushed out. So any new jobs are going to be for new residents who can afford to live here after prices spike.

"This is a community of fighters. And we're going to fight this."

If it were up to these groups, the government would take over the land and let them live on it rent-free. Sorry folks, it didn't work in Venezuela and it won't work here.

The BASTA are correct, this will destroy their neighborhood as it is now. Yes, it will generate big profits for the Chargers owners but it will at the same time "redevelop" the area which will cause the land values and rents to skyrocket.

Another downtown $tadium will create yet more traffic blight which is not what the City should be doing if they expect to meet their "climate change" goals.

I suggest that BASTA get an environmental/land use lawyer ASAP (maybe the same one that helped fight the One Passeo development) and then join forces with all those that are also opposed to yet another billion dollar $tadium!