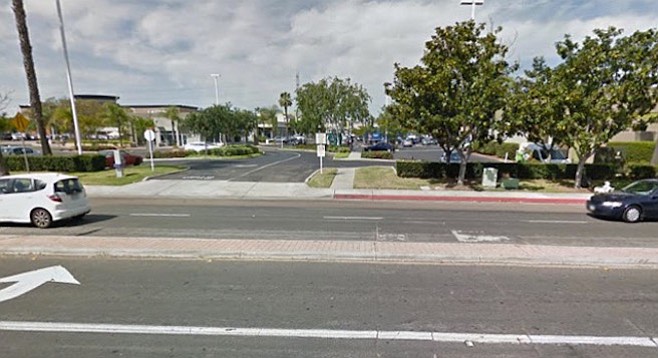 On Tuesday, July 19, city councilmembers will approve a $375,000 settlement for a couple who were injured in a 2013 motorcycle accident that occurred at an intersection outside of a Walmart in Clairemont Mesa.

Garrett and Pamela Slavin were riding their Harley-Davidson south on Shawline Street when a motorist exited the Walmart parking lot in front of the couple. Garrett Slavin suffered serious injuries to his arms, while Pamela Slavin injured her neck in the crash.

In August 2014, the Slavins sued the city for creating a "trap" in the public right-of-way and for failing to design and mark a two-way roadway.

"[The City]...and its employees, agents, contractors and representatives were negligent in the course and scope of their employment, in failing to appropriately designate, place, situate, sign, stripe, mark, paint, delineate, illuminate, design, construct, maintain or otherwise provide, identify and/or control with appropriate traffic control devices, an appropriate roadway facility...which would have minimized or eliminated conflicts and/or potential accidents..."

In May 2016, after nearly two years of litigation, the city council agreed to settle the case during a closed-session meeting.

The $375,000 settlement resolves all claims against the city and its employees. It will cover all damages, medical expenses — both past and pending — and attorney fees.

According to the agenda, the money will be taken from the city's Public Liability Fund. The city council will hear the item during their 2 p.m. city-council session on July 19.

So just what was it that the City failed to do? Were they supposed to post a sign "Watch for Walmart Drivers"?

The picture doesn't make it entirely clear. Perhaps what the Walmart customer viewed as the driveway looked like the street to through traffic. There is a solid white line and an arrow going across what looks like a traffic lane, two cars in two other lanes, both going in the same direction, no signs. The city must not have predicted victory, as they agreed to settle after two years of litigation, it never went to court, where we must assume the settlement would have been expected to be higher.

The street has been poorly marked for a long time. It starts off as two lanes going south from Clairmont Mesa Blvd, with a couple arrows indicating the right lane is ending.

From there, however, the street doesn't narrow, there is no marking on the right side indicating the lane has ended, or any reason why the lane has ended(like spots for vehicle parking along the curb.) As a result, drivers going south end up all over the place in the lane, with no real indication as to where they are heading. (Continuing straight? Possibly making a right into the parking lot? Are they pulling to the right to go around a car preparing to make a left?)

Motorcyclist was probably on the right side of the lane causing the Walmart customer to think they were pulling into the lot, and pulled out right in front of the cycle.

Thank you for the explanation, dbdriver. I obviously don't go to Walmart very often. It makes perfect sense now.