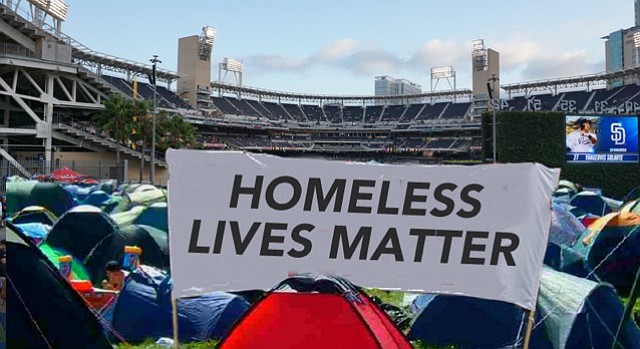 “First it was the sharp rocks along the side of the road on Imperial Avenue,” said Homeless Lives Matter spokesman Ron Vagabond from his two-person tent on Petco Park’s rolling green lawn prior to Major League Baseball’s All-Star Game on Tuesday. “Then it was this psychopath killing us and setting us on fire all over town. But you know, those are just the latest, most visible aspects of a prolonged and multipronged strategy to get the homeless out of America’s Finest City. I mean, there’s a reason why San Diego has been steadily sinking on Hobo Times’ annual ‘Best American Cities to be Homeless In’ list. So now we’re taking a stand. Well, a sit. Or a lay-down. Sort of a nap-in. The eyes of the nation are on San Diego as it hosts the All-Star game, and we’re going to be seen and heard. Just because we’re homeless doesn’t mean we don’t have rights!”

“Actually, it does,” replied San Diego police sergeant Bill E. Club as he approached Vagabond and his fellow homeless. “You need a permit to hold a protest like this, and to register for such a permit, you need a permanent address. You lose again, pal. Pack it up and move it out before I call in crowd control.”

Between muttered curses and half-intelligible rantings, Vagabond was heard to say that he and his fellows would return once the police had left, “just like usual. And so the dismal dance goes on."

Welcome to the San Francisc-ation of San Diego.