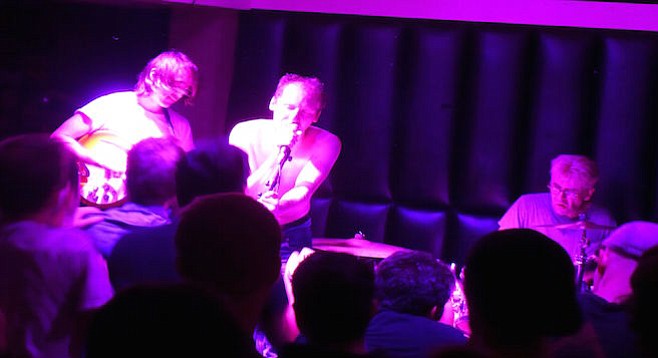 Before Royal Headache started their set, I spotted their bassist, Joe, taking a stab at the NFL Blitz ’99 arcade game nestled in the club’s main room. Perhaps he was using it to learn the ins and outs of American football.

The Aussies made it to America safely and delivered a stellar set of pub-infused punk to the enthusiastic crowd. So enthusiastic, in fact, that a bouncer setup camp in the main room to monitor a collection of rambunctious, pogo-ing fans.

The show may not have been sold out, but it felt snug in front of the stage. Even though lead singer Shogun isn’t much for small talk between songs, he made it quite clear that he was struggling with how hot it was becoming onstage. It doesn’t help that once a Royal Headache song begins, Shogun’s body launches into a delirious dance that borders on demonic possession, which didn’t keep him cool on this evening. He ditched his shirt fast.

The band sounded great, though, making it clear that they are deserving members of the elite underground bar bands that, over the years, have included the likes of the Replacements, Guided by Voices, and the Hold Steady. Shogun’s soulful voice separates this band from its peers, and it feels as if they haven’t even begun to find their full potential yet.

Choice cuts from the evening included a rollicking take on “Electric Shock” and the perfect summer anthem, “Carolina.”